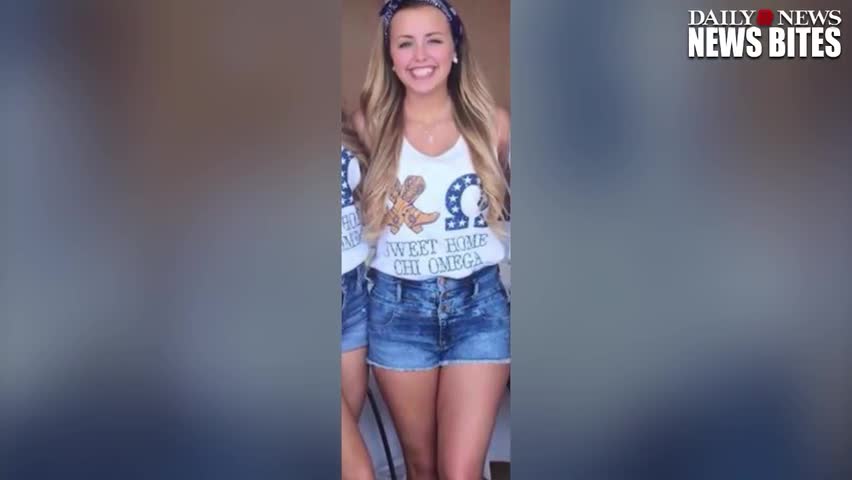 University of Nebraska Omaha student Shannon Workman is no longer a member of the Delta Zeta chapter of Chi Omega sorority -- but not for any of the reasons you might expect.

Rather than getting kicked out for partying too hard or failing a class, Workman was dismissed as a result of of posting the following picture on her Tinder profile:

The seemingly innocent photo is apparently in violation of Chi Omega sorority's 'human dignity' rule, which states that sisters aren't allowed to post photos of themselves wearing letters on any platform that would bring "disrespect to the chapter."

According to the sorority official that called a disciplinary meeting with Workman, Tinder is considered a hookup app, and thus violates such policy.

"[The Chi Omega official] said pictures that are promiscuous or risqué in nature require a personnel meeting," Workman told Good Morning America in a recent interview. "I was so humiliated."

Was this fair? Was it too far? See reactions to this story on social media:

This student was kicked out of her sorority because of her Tinder photo
A picture shows the logo of dating app Tinder on a tablet in Paris on March 15, 2016. (Photo: LIONEL BONAVENTURE/AFP/Getty Images)
So a college sorority girl was kicked out bc of her @Tinder photo. I saw the photo it doesn't look "provocative" or "suggestive" #ChiOmega
@NYDailyNews They r Really Trippin!!!!!
@EliteDaily You don't show your letters on fucking TINDER! What was she thinking?! I'd have had her kicked out too.
@GMA You are a Jr in college, you have been to several meetings as a sorority sister. You were a big, set an example for your little sis.
@GMA rules are rules
@GMA this is ridiculous? How is this a promiscuous, risqué photo? Please explain how this is suggestive in nature? She deserved better.
@NYDailyNews Power trip or they did not like her, simple. Sororities, who needs these losers if that act this way.
@NYDailyNews ha! No more risque than any spring formal pic
Up Next

Workman had already removed the photo by the time she was called in for a meeting, which she secretly recorded.

"The fact is we're having combative attitude and disrespect," the board said about her in the meeting.

Even worse? When the sophomore denied any accusations made against her, she was told "we know what type of girl you are," according to the site Total Sorority Move.

Not shockingly, Workman, who had been a sister of her chapter for three years before the incident, isn't the first member of the organization to be dismissed with little or no warning -- and some other girls are now coming forward.

Lacey McPhail recently took to Facebook to comment on her own similar experience with the Delta Zeta chapter of Chi Omega sorority -- which she claims has happen to "at least 10 other girls."

When I was forcibly removed from Chi Omega Zeta Delta, I chose to keep my mouth shut and just kind of dealt with the...

"These successful, bright young women were given only ONE (1) personnel meeting, which is generally considered a 'warning' meeting before being removed," McPhail said in her post.

"That is not very 'Christian' of them, they offer no forgiveness for nominal mistakes and are very pushy and rude about any issue in a personnel meeting and say the girl at fault should be immediately removed." Lacey McPhail, Former member of Chi Omega

The Delta Zeta chapter of Chi Omega responded to the recent incidents on their website, saying that "regardless of a member's status, Chi Omega owes it to all of our current and former members to ensure personnel matters are kept private to the best of our ability; therefore, we will not be commenting further on the specifics of this matter."

More from AOL.com:
Wal-Mart's newest promotion can save you $100 on a new smartphone
Snap-arazzi: Best celeb Snapchats of the week (4/2 - 4/8)
This hack gave a British man access to free and unlimited Domino's pizza