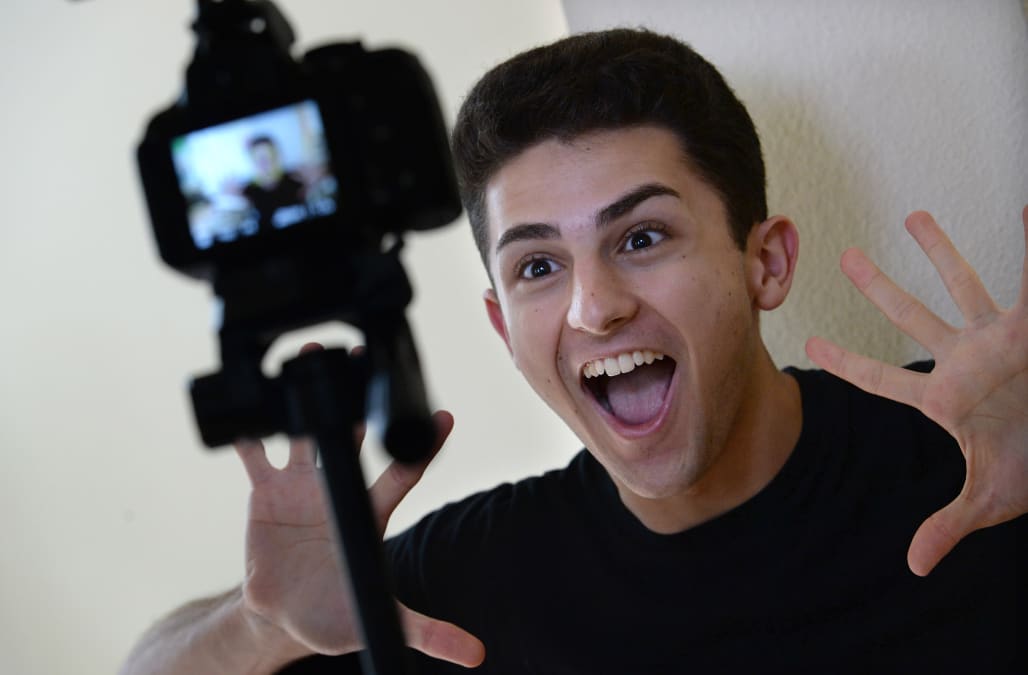 YouTube personality Issa, better known by his stage name Twaimz, has quickly amassed over 2 million followers and 146 million video views in just three years. His meteoric rise to success is in part due to his extensive knowledge and dedication the social space. Before Twaimz ever stole the heart of millions of fans with his out-there llama videos and dance numbers, he was just Issa, a typical high school student who was a self-proclaimed die-hard fan of all things YouTube. His idol? Shane Dawson.

After getting the chance to meet Dawson at VidCon -- an annual conference for YouTube creators -- Issa's life was completely changed. That night he went home, started his first ever YouTube channel, and dubbed himself Twaimz. Since then, Twaimz has become one of the most viral creators on the YouTube space, garnering millions of fans, going on a US tour, is a creator for the Fullscreen Network, and even being tapped to host a new series "Sour Patch Kids Prom Project." And after speaking to Issa, it's clear that he's not letting fame get the best of him.

As Issa notes, "I don't want to be seen as someone you just look at. I want to give you a hug! I want to be friends with you." The young creator's drive and passion to create an intimate bond between him and his fans is all thanks to his own experience as a YouTube fanatic. And by drawing on this personal experience, Twaimz's videos feel so authentic and relatable, it's hard not to fall in love with him.

We recently had the chance to speak with Issa, the man behind the viral account Twaimz, about how his own love of Internet changed and shaped the way he created his YouTube videos. Ahead, find out how his meeting with Shane Dawson started his career, how his personality morphed since being on YouTube and more!

And if you want even more Twaimz news, head over to AOL.com at 12 p.m. ET to see more exclusive features, including his newest video series, "Sour Patch Kids Prom Project."

It's a very long story! To start out, I did not actually start on YouTube. I started on Vine first. I was on the other side of the Internet world as a fan or viewer of YouTube. I supported so many YouTubers -- especially Shane Dawson. I wanted to be him so bad. And my friend one day asked me if I wanted to go to VidCon and I said yes and ended up waiting four hours in line to meet him. I had this photo of a dog that I had drawn for him and I was freaking out trying out to figure out what to say to him when we finally met. I was shaking, I hadn't eaten that day, and I felt like I was going to faint. So I get in line and I give him the drawing and he thanked me. We had such a great conversation and he's so genuine. Being exposed to that made me love him and the Internet world even more than I already did.

I got home after VidCon and saw he had posted this vlog of VidCon and at the end of his video, he showed the drawing that I gave to him and said "Thank you Issa!" And once he said my name I screamed so loud. I just lost it completely. I freaked out and got so inspired and felt like I had to showcase something. I was in a state of mind where I felt so blessed. After that I thought, "Well I love Youtube, I love how that world works and how YouTubers are treated, so I want to do it too!" I wasn't having the best time in college either. It was my first year then and I felt like I wasn't moving anywhere. The day that I went home after VidCon was the day I made my YouTube channel that I use today. I took this horrible picture on my webcam and created the channel.

My original plan was to do Youtube but I realized that getting your content out there is hard. I didn't know what type of content I wanted to make plus I had no clue about how YouTube worked. So I had to start out simpler and I was watching Vine at the time, so I started making Vines myself. I did that for a couple months and that started kicking off.

So I started doing Vine originally and then that blew up and eventually I realized it was the best time to go back to my first love, which was YouTube. So I'll admit that I didn't really know how to be myself at first, but I kept working at it and I started making things I wanted to do and incorporated my love of dancing, music, and rapping. I'm so theatrical in person and on YouTube so I didn't force anything and I took it wherever it went.

I heard that you considered yourself really shy at first. What was that internal progression like for you as you exposed yourself more and more on Youtube?

In high school and middle school I was completely polar opposite. If I were to meet my younger self it would be a completely different person than who I am now, physically, emotionally and mentally. I felt like I was locked up in this cage where I couldn't express my personality or even tell someone that I was gay. It got to the point where I felt like I had to make a change. I began losing weight and cutting people off in my life who were very negative. Then I made the videos and my life was a complete 180 at that point.

YouShouldKnow is a feature that showcases up-and-coming social stars. To see more of past interviews, click here. And come back at 12 pm EST for more exclusives on Twaimz, including his newest video series "Sour Patch Kids Prom Project"

For more on past YouShouldKnow stars, scroll through the gallery below!