11 spring vegetables you should be eating right now 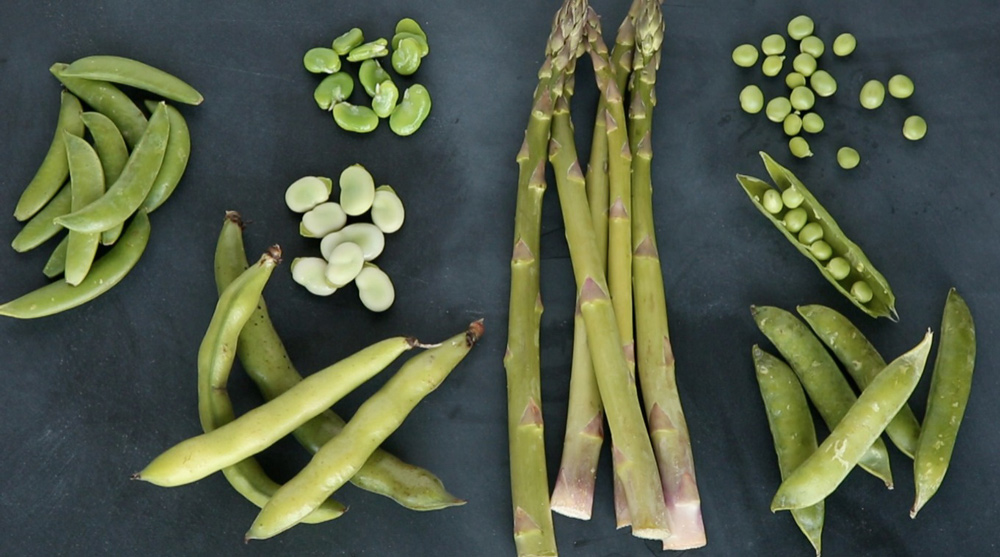 After months of winter root vegetables and frozen veggies, spring is a time to indulge in delicate, light produce just beginning to pop out of the ground. When farmers markets are bursting with a new assortment of colors and shapes, it's easy to try something unfamiliar in the kitchen, be it a new vegetable, a new recipe, or a new cooking method. Building menus around seasonal produce is a healthy way to support local agriculture, nourish the body, and eat well on a budget. These 11 ingredients are cheap and fresh during springtime.

11 spring vegetables you should be eating right now

It wouldn't feel like spring without an abundance of peas. Green peas are actually the underripe seeds of a pod that, if left to mature, would turn into beans. The convention of harvesting and consuming them early, while still full of sweet earthy flavor, began as far back as the Roman empire. Use them to add flavorful bulk to pastas and soups, or feature them on their own as a side dish seasoned with fresh herbs or a touch of oil, butter, and lemon. Harvest to Table has a guide to making perfectly cooked fresh spring peas.

This ancient Mediterranean vegetable is related to the artichoke, but its flavor is in the edible, leafy stem rather than oversize buds. The celery-like stems were popular in ancient Rome, Greece, and Persia and common in colonial America. The cardoon has fallen out of fashion since, but this high-yield vegetable is easy to cultivate, so it's likely to be inexpensive at the local market if available. Cardoons are delicious braised with white wine, sautéed with garlic, or fried and served with tomato sauce. Food & Wine has a recipe for golden fried cardoon.

Out-of-season asparagus tends to be tough, overly fibrous, and overpriced. When fresh, though, the delicious spears need little preparation. Tossed in olive oil, salt, and pepper, charred briefly on a grill, and dressed with a squeeze of lemon, they are simple and sublime. Use them in place of meat in sandwiches, as a pizza topping, or in a French-style omelet to appreciate their delicate flavor.

Ramps are a variety of wild onion harvested while the bulbs are still small and tender and the leafy shoots are still sweet and earthy. While many associate ramps with expensive specials at fine-dining restaurants, they can be harvested in rural areas for free and found at farmers markets for low prices when in abundance. Their flavor is delicate and best appreciated when lightly grilled or sautéed and tossed into rice or pasta dishes, or as a seasonal pizza topping. Serious Eats has some savory ideas for ramps.

This pungent green was a popular herb in ancient Rome. Today it has become one of the preferred varieties of greens for salads and sandwiches, and a topping for other dishes. The difference in depth of flavor from the pre-washed and packaged baby arugula from the supermarket and fully mature greenmarket arugula is significant and worth experiencing. Washing a leafy bunch thoroughly is no more complicated than submerging the leaves in a deep bowl of cold water and letting the grit fall to the bottom. Once the leaves air dry, they are ready to be tossed with olive oil, lemon juice, and salt and devoured.

New potatoes are harvested early, so they have a thin skin and are generally smaller than the average store-bought baking potato. They are particularly well-suited to leaving whole or halved for chunky potato salads -- such as a sophisticated but simple new potato salad from Epicurious -- or buttered and salted as a side dish. These slightly sweeter potatoes offer more nutrition, because the skins (with their extra fiber and nutrients) are tender enough to eat along with the starchy center.

Sweet as candy with a satisfying crunch, sugar snap peas are available in large, inexpensive mounds during the spring. These sweet vegetables originated as a cross of traditional hard-shell peas and a Chinese snow pea a few hundred years ago. Out of season, they are wrinkled and limp, and often have a bitter taste. At their peak, they are best enjoyed raw as a snack, on crudité platters, or sliced thin and added to salads and noodle dishes.

These adorable little bulbs are the spiral version of the fern before it opens and are available for just a week or two each year. After a quick blanch or sauté, they are tender with a subtle, earthy flavor. Toss them into a pasta dish, including traditional pasta salad, or simply dress them with garlic and lemon as a side dish. Look to Allrecipes for a fast, low-calorie recipe for fiddleheads sautéed with olive oil and garlic.

This extra-sweet variety of onion has a legally protected origin and can come only from the state of Georgia, much like the sparkling wine Champagne can come only from the Champagne region of France. Despite their year-round availability, onions are sensitive crops and change dramatically based on sunlight exposure. As a result, the most desired variety of Vidalia is available only during spring and summer. The Vidalia Onion Committee has plenty of recipe ideas that pair the vegetable with everything from bacon to fruit to potatoes. There are even dessert recipes, including a Vidalia onion chocolate chip cookie.

This leafy green is making a comeback in culinary scenes worldwide. Grown all over the world, it is a unique and pungent herb with a tannic, sour flavor. The leaves can be used raw in salads or anywhere an herb would be used to add lemony tang. It is also common to use sorrel in cooked dishes such as soups, stews, and sauces. The unique flavor is a great starting point for creativity; The Kitchn has some recipes to get the juices flowing.

Fresh spinach has a strong flavor and soft, almost spongy texture, unlike many of the pre-packed versions available year-round. Indulge in green smoothies and spinach salads throughout the spring. To get the most out of the season, buy and use fresh spinach frequently, because bunches tend to wilt quickly. Be sure to wash the leaves thoroughly by submerging in a bowl of cold water before using in a favorite recipe. There are plenty online from Cooking Light or Bon Appétit.

More from Cheapism:
When Is It Worth Buying Organic?
10 Tasty Wines Under $12 to Try This Spring
What Food Freshness Dates Really Mean