Octopus breaks out of New Zealand aquarium, remains at large 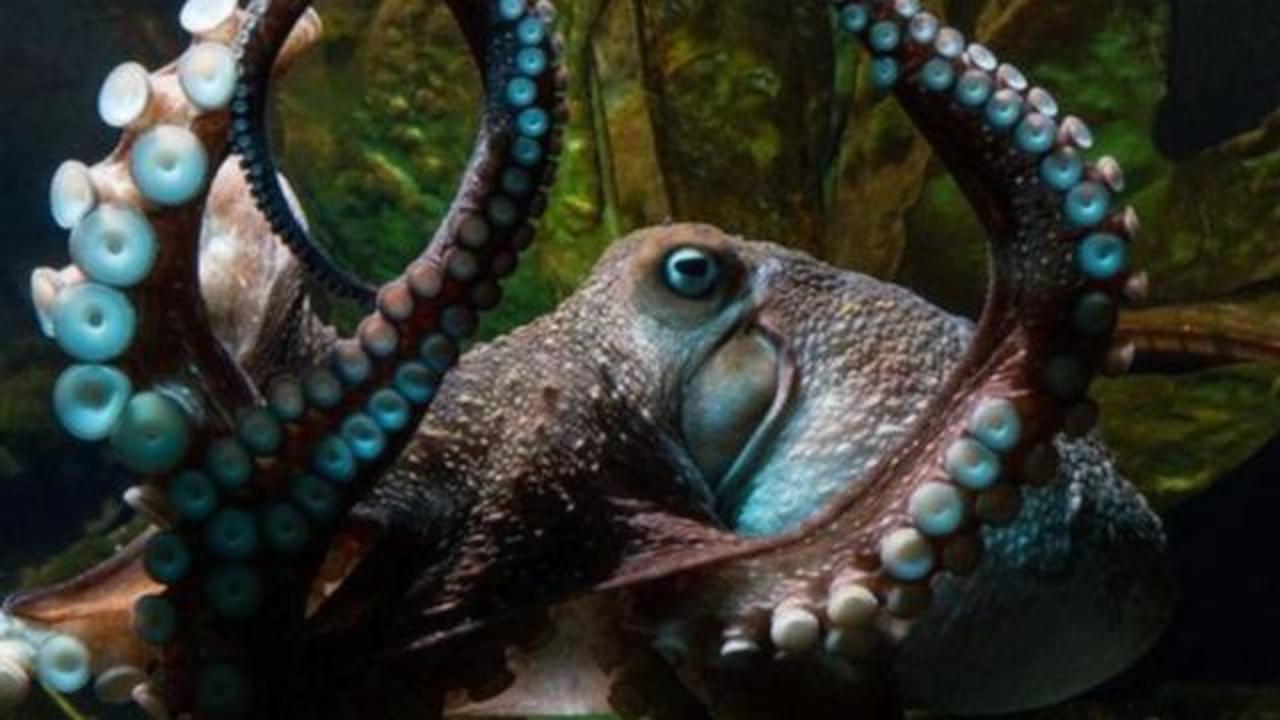 Octopuses have long been the subjects of lore and legends that describe them as being aggressive and formidable forces of the sea.

It appears they're also very good at the art of escaping.

An octopus named Inky successfully fled from the National Aquarium in New Zealand.

Based on some octopus tracks found at the scene, staffers believe the creature slipped through a small opening at the top of the tank, moved across the floor, and headed down a drainpipe.

Thankfully, the pipe lets out into the ocean, so there's a very good chance that's where the animal is now.

The masterful breakout occurred roughly 3 months ago but was only recently made public.

Take a look at some other species of octopus:

Octopus breaks out of New Zealand aquarium, remains at large
An incirrate octopod is shown at a depth of 4,290 meters taken by a remotely operated underwater vehicle Deep Discoverer near Necker Island, or Mokumanamana, on the northwestern end of the Hawaiian Archipelago in this image courtesy of NOAA Office of Ocean Exploration and Research, Hohonu Moana 2016, released on March 5, 2016. REUTERS/NOAA/Handout FOR EDITORIAL USE ONLY. NOT FOR SALE FOR MARKETING OR ADVERTISING CAMPAIGNS. THIS IMAGE HAS BEEN SUPPLIED BY A THIRD PARTY. IT IS DISTRIBUTED, EXACTLY AS RECEIVED BY REUTERS, AS A SERVICE TO CLIENTS
A flapjack octopus (Opisthoteuthis californiana) swims in its darkened tank for the upcoming "Tentacles: The Astounding Lives of Octopuses, Squid and Cuttlefishes" exhibition at the Monterey Bay Aquarium in Monterey, California, April 8, 2014. The $3.5 million exhibition, which opens April 12, will feature some species being raised and exhibited for the first time anywhere in the world. REUTERS/Michael Fiala (UNITED STATES - Tags: ANIMALS ENVIRONMENT SOCIETY)
Octopus Ophira, a so-called "octopus oracle" is pictured before it predicts Germany's victory in the Women's World Cup soccer match against Nigeria, at the Sea Life Aquarium in Berlin June 30, 2011. Ophira chose a fish from a glass tube with the German flag instead of a glass tube with the Nigerian flag to predict the winner. The 2011 Women's World Cup tournament is held in Germany June 26 - July17. REUTERS/Tobias Schwarz (ANIMALS ENTERTAINMENT SPORT SOCCER)
An octopus is seen in the Indian Ocean near Diani beach in the Kenyan coastal city of Mombasa, March 26, 2011. REUTERS/Natasha Elkington (KENYA - Tags: TRAVEL ENVIRONMENT)
Octopus Paul II is presented to the media at the Sea Life Centre in the western German city of Oberhausen, November 3, 2010. Paul II replaces World Cup oracle Octopus Paul, who died last week. The young French-born octopus was transferred to the Sea Life Centre some weeks ago so that Paul I could teach him predictive powers, but unfortunately Paul I died before he could do that, a spokeswoman said. It has not yet been decided whether Paul II will predict the results of the European Football Championship in 2012. REUTERS/Ina Fassbender (GERMANY - Tags: ANIMALS SOCIETY SPORT SOCCER)
Octopus "Paul", better known as the so-called "octopus oracle" sites on a soccer ball in his aquarium at the Sea Life Aquarium in the western German city of Oberhausen July 9, 2010. The octopus has became a media star after correctly picking all six German World Cup results including their first-round defeat against Serbia and their semi-final defeat against Spain. On Friday "Paul" predicted Spain's World Cup victory over The Netherlands and Germany's victory in their third place match against Uruguay. REUTERS/Wolfgang Rattay (GERMANY - Tags: SPORT SOCCER WORLD CUP ANIMALS SOCIETY)
(GERMANY OUT) Common Octopus, Octopus vulgaris, Roca Partida, Revillagigedo Islands, Mexico (Photo by Reinhard Dirscherl/ullstein bild via Getty Images)
An octopus is on display on April 24, 2013 at the State Museum of Natural History in Karlsruhe, southern Germany, to promote Baden-Wuerttemberg's 'Grosse Landesausstellung' (Great State Exhibition). From April 25 to October 27, 2013, the museum presents the show 'Bottomless - Through the Air and Under Water'. AFP PHOTO / ULI DECK / GERMANY OUT (Photo credit should read ULI DECK/AFP/Getty Images)
Up Next

More from AOL.com:
Blink and you'll miss this spider's bite
Erykah Badu thinks girls should cover up in schools so male teachers aren't distracted
5 hot beard styles for your man