Judge orders 'affluenza' Texan to spend about 2 years in jail 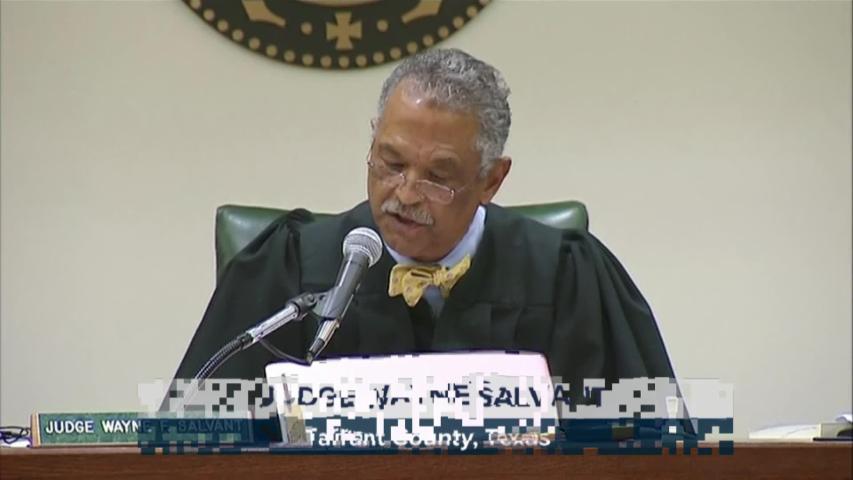 FORT WORTH, Texas (Reuters) -- A Texas county judge sentenced the so-called "affluenza" teen on Wednesday to serve four consecutive 180-day terms in jail after he killed four people outside of Fort Worth with his pickup truck while driving drunk in 2013.

Ethan Couch, 19, has been in a Tarrant County jail since January. In his first appearance in adult court, he was given the sentence of almost two years in jail by Judge Wayne Salvant, the maximum allowable probation conditions for the case in the adult system.

Judge orders 'affluenza' Texan to spend about 2 years in jail
Tonya Couch is seen at her bond reduction hearing on Monday, Jan. 11, 2016, at Criminal District Court No. 2 in Fort Worth, Texas. (David Kent/Fort Worth Star-Telegram/TNS via Getty Images)
Tonya Couch, mother of Ethan Couch, appears before state District Judge Wayne Salvant on Jan. 8, 2016 in Fort Worth, Texas. (Rodger Mallison/Fort Worth Star-Telegram/TNS via Getty Images)
Returneing to Texas from Los Angeles, Tonya Couch, mother of 'affluenza' Ethan Couch, arrives escorted by sheriff's deputies at the Tarrant County Jail in Fort Worth, Texas, on Thursday, Jan. 7, 2016. (Paul Moseley/Fort Worth Star-Telegram/TNS via Getty Images)
LOS ANGELES, CA - JANUARY 5: Tonya Couch, 38, (L) mother of ``affluenza' teen Ethan Couch, appears in Los Angeles Superior court for an extradition hearing January 5, 2016, in Los Angeles, California. Couch faces a felony charge in Texas for allegedly helping her 18-year-old son flee the country while out on probation. (Photo by Genaro Molina/Pool/Getty Images)
Up Next

"You are not getting out of jail today," Salvant told Couch, who was wearing a red jumpsuit from the Tarrant County Jail. Salvant said he will hold another hearing in about two weeks to consider the sentence he imposed.

At his trial in juvenile court in 2013 when he was 16, a psychologist testifying on his behalf said Couch was so spoiled by his wealthy parents that he could not tell right from wrong. The psychologist described the affliction as "affluenza," a term that quickly became a media buzzword.

He was sentenced to 10 years of probation, a penalty that sparked outrage from critics who ridiculed the affluenza defense and said his family's wealth helped the teen stay out of jail.

Tarrant County Sheriff Dee Anderson said Couch's demeanor has changed since being in jail from being quite cocky at first to rather compliant.

The change is due to the "stark reality he is dealing with today," Anderson told reporters at court, adding Couch will remain in solitary confinement for his own protection.

Couch was taken into custody in Texas after he fled to Mexico in December with his mother, apparently to avoid arrest for violating the drink- and drug-free terms of the probation deal after video on social media appeared to show him at a party where alcohol was being consumed.

Judge Salvant is also presiding over the case of his mother, Tonya Couch.

She is charged with helping her son flee to Mexico. She was released on bail but is under home confinement awaiting trial.

If convicted, she faces up to 10 years in prison.

More from AOL.com:
Taxpayers pick up bulk of rehab bill for 'affluenza' Texan - newspaper
The gun emoji just landed a guy in jail
What a Texas mom did when her infant girl wouldn't stop crying is beyond all belief