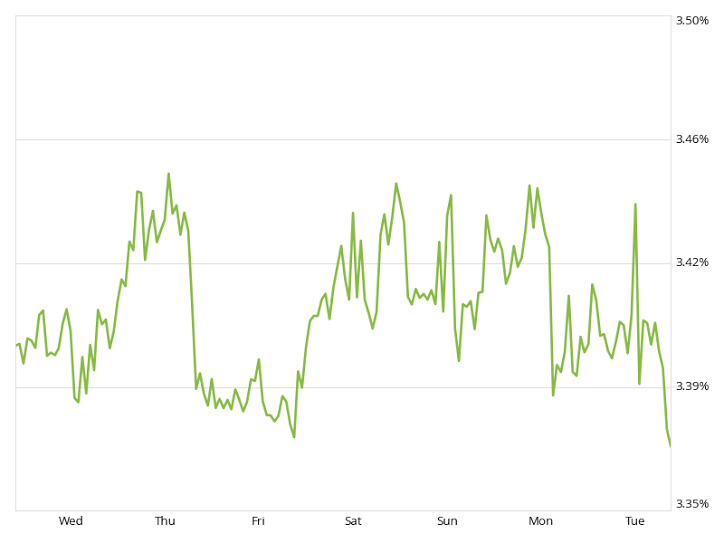 Current mortgage rates for 30-year fixed mortgages fell this week, with the current rate borrowers were quoted on Zillow at 3.39 percent, down 1 basis point from last week.

The 30-year fixed mortgage hovered between 3.40 and 3.45 percent for most of the week before dipping to the current rate.

Check Zillow for mortgage rate trends and up-to-the-minute mortgage rates for your state, or use the mortgage calculator to calculate monthly payments at the current rates.

Related: 10 cities with the most tiny homes

12 PHOTOS
10 cities with the most tiny homes
See Gallery

Not everything is bigger in Texas. In fact, tiny homes are catching on throughout the state. Dallas has the 10th highest number in the nation of tiny homes listed for sale — tied with Irving, Texas, and Nashville, Tenn.

Like in many large cities, housing costs are high in Dallas. The city has experienced one of the steepest surges in rental prices in the nation, according to the Zumper National Rent Report for August 2015. Low-price tiny homes might be offering an alternative to high-rent apartments and high-priced homes.

Related: Best (and Worst) States to Buy a Home This Spring

This suburb has as many tiny homes listed for sale as its bigger neighbor, Dallas. High housing costs could be among the reasons.

Nashville is one the many cities where the tiny house movement is growing. In fact, a micro-home community for the homeless was recently created in Nashville, reports USA Today.

However, there are some restrictions on small homes in the city. Zoning laws allow for accessory dwelling units — small structures built on property with a primary structure — according to MusicCityTinyHouse.com. But houses on wheels can only be in areas that allow RV camping.

Housing costs in this city in the Denver metropolitan area aren't as high as in Aurora's bigger neighbor. But there are several tiny home contractors in the area, which might explain why so many tiny homes are listed for sale in Aurora.

One of the big builders of tiny homes, Tiny Texas Houses, is located about 60 miles from San Antonio — which might explain why the city has many tiny homes listed for sale.

Small home construction company Tennessee Tiny Homes — and sister company, Tiny Happy Homes — are located just outside Memphis, which might explain the high number of small house listings in the Memphis area. In fact, one of Tennessee Tiny Homes' houses has been featured on the FYI TV series, "Tiny House Nation."

Tiny homes were actually the big attraction at the recent Denver Home Show, a testament to the growing popularity of these small structures in the Mile-High City. "Tiny House Nation" has even filmed episodes in Denver, according to The Denver Post.

However, zoning laws in Denver — like in many other cities — don't favor tiny homes. But, city officials have said recently that they're open to discussing rules regarding tiny houses, reports The Denver Post.

It's well known that San Francisco is one of the most expensive cities to live in. The median home sales price is nearly $1 million, according to Zillow. With a lack of affordable housing, there is a demand for inexpensive tiny homes.

However, prospective tiny house homeowners should do their research first; San Francisco's zoning codes make it difficult to have a tiny home legally.

Housing costs also are high in San Francisco's neighbor to the East, Oakland, which recently saw rent prices surge 20 percent, according to the Zumper National Rent Report. As a result, it seems that tiny homes are growing in popularity as an affordable alternative.

But, zoning laws make it difficult to find a place to park or build a tiny home legally, too. Despite the obstacles, tiny house enthusiasts abound in Oakland. The East Bay Tiny House Enthusiasts group has more than 1,000 members.

Austin residents who are renting might want to consider becoming first-time homeowners — tiny house homeowners, that is. Austin was the second fastest-growing rental market in the U.S., with rental prices jumping 17 percent, according to the Zumper National Rent August 2015 Report. As a result, there's been a push in the city for more affordable housing.

The growth in tiny homes might be fueled by the high cost of housing in Seattle, which has the 10th highest median rent for one-bedroom apartments in the nation, according to Zumper, and a median home sale price of $515,561, according to Zillow.

Seattle created a village of tiny homes and opened it in early 2016 for those least able to afford the city's high housing costs: the homeless, reports local news station KIRO 7.

Portland is considered to be a hotbed of tiny homes (it's also the best U.S. city for saving money). There are likely many reasons why the tiny house movement has caught on here.

For starters, the median rent is among the top 20 highest in the nation, according to the Zumper National Rent Report. And the median sale price of homes in Portland is $332,600, according to Zillow.

Portland's zoning rules are also friendlier to tiny homes compared to other areas. There also are plenty of resources for tiny home enthusiasts — including lecture series and workshops — and the Build Small, Live Large small house summit was held in Portland in 2015.

More from Zillow
RV living in the city: Dodging the rent crisis
Las Vegas: The town that choked on debt
The burden of the commute: Tales from a rebounding real estate market