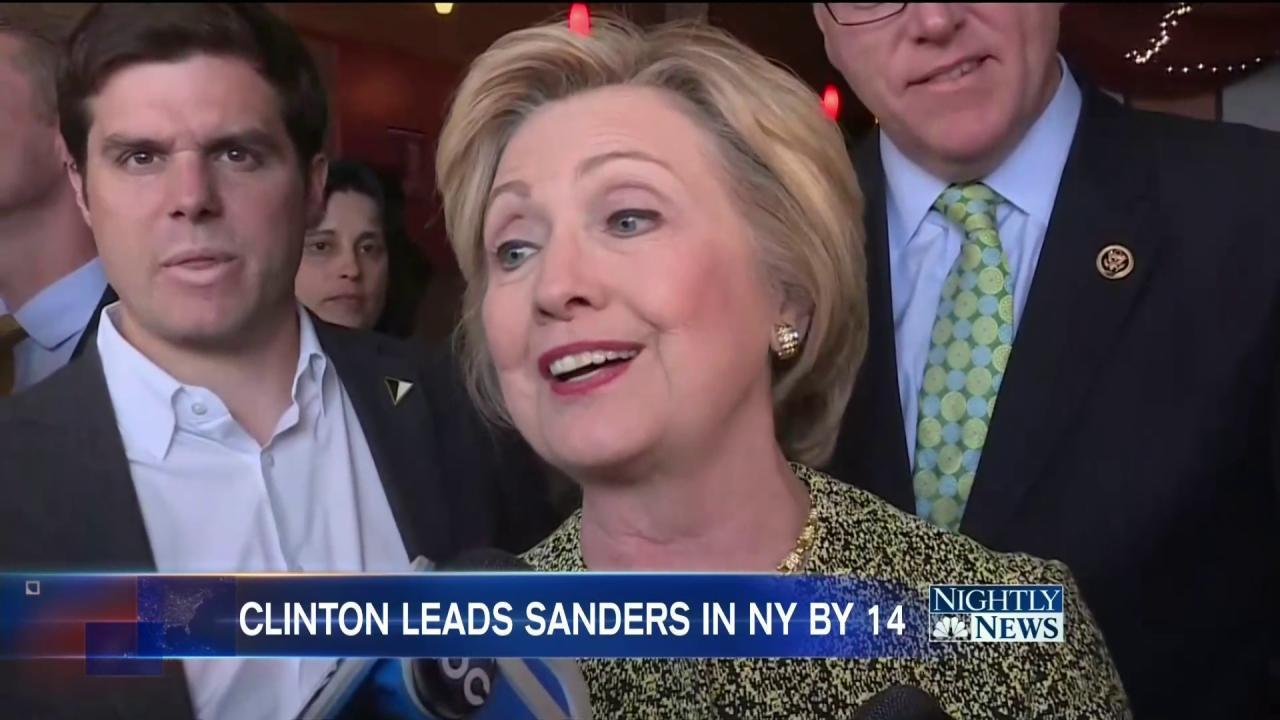 Donald Trump and Hillary Clinton have opened up double-digit leads in New York ahead of the state's April 19 primary, according to a new NBC News/Wall Street Journal/Marist poll.

"The road to the convention goes through New York for both the Democrats and Republicans," said Lee Miringoff, director of the Marist College Institute for Public Opinion, which conducted this survey. "Right now, the front-runners look like they will erase recent setbacks and add significantly to their delegate margins."

In the Republican race, Trump gets support from 54 percent of likely Republican primary voters - followed by John Kasich at 21 percent and Ted Cruz at 18 percent.

10 facts about Hillary Clinton you may not have known:

1. She went by her maiden for years after she married Bill in 1975. She went by "Mrs. Bill Clinton" shortly after her husband lost the 1980 Arkansas gubernatorial election in part because voters had questioned their marriage's stability.

2. She once described herself as a tomboy who wanted to be an astronaut, and wrote to NASA as a 12-year-old about how she could become an astronaut. They sent her a reply, clarifying that NASA didn't accept women in their astronaut program.

3. She was the student speaker picked to give the commencement speech at Wellesley, and received a standing ovation.

6. In 1974, she was one of only three women out of 43 lawyers who worked on the inquiry into whether President Nixon would be impeached.

10. Her mother told her that she had been named after Sir Edmund Hillary, who was the first man to to climb Everest, despite the fact that he had done so five years after she was born. A spokesperson for Clinton has said that this was a "sweet family story her mother shared to inspire greatness in her daughter, to great results I might add."

If Trump wins with more than 50 percent of the vote both statewide and in each of New York's 27 congressional districts, he'll walk away with all of the state's 95 delegates - more than making up for what he lost last week in Colorado and Wisconsin.

Sixty-four percent of likely New York Republican voters say the Republican Party should still nominate Trump for president if he's won the most delegates but not enough to be nominated on the first ballot, versus 28 percent who believe the party should nominate someone else under those circumstances.

Clinton up 14 points over Sanders in the Empire State

In the Democratic race, Clinton is ahead of Bernie Sanders among likely Democratic primary voters by 14 points, 55 percent to 41 percent.

SEE ALSO: Biden may have just revealed who he'll vote for in '16

Sanders, meanwhile, holds the advantage among those younger than 45 (62 percent to 37 percent) and those who describe themselves as "very liberal" (59 percent to 40 percent). The two are running roughly even among men and Latinos.

Geographically, Clinton is ahead of Sanders in New York City (58 percent to 39 percent) and in the suburbs (61 percent to 36 percent), but Sanders holds a one-point lead in Upstate New York (49 percent to 48 percent).

Strikingly, 30 percent of likely Democratic voters who support Sanders say they wouldn't support Clinton in a general election, compared with 15 percent of Clinton voters who say that about Sanders.

Yet both Clinton and Sanders easily beat Trump, Cruz and Kasich in hypothetical general-election matchups in the blue state of New York.

Donald Trump through the years:

More from NBC News:
Sanders: Clinton Not 'Qualified' to Be President
Sanders Digs In, Clinton Calls for Unity in Spat Over Qualifications
Clinton Leads Nationally but Sanders Has Wisconsin Advantage