He went to the dentist to have four teeth pulled but when he left, there wasn't a smile in sight 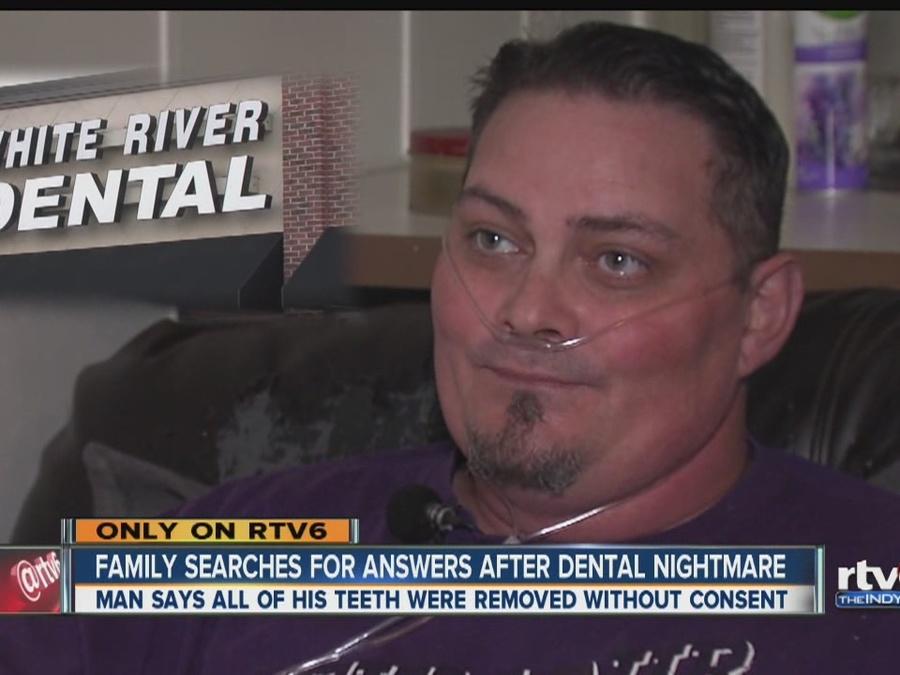 Usually when you make a trip to the dentist you hope everything goes as planned.

Donny Grisby said he went to White River Dental in Columbus, Ind., to have four teeth removed in March, 14 News reported. However, when he woke up, he had no teeth.

SEE ALSO: An online petition is now circulating after this offensive billboard in Florida caused quite the stir

After waiting several hours in the waiting room, his wife, Amanda, said she wanted answers. She said doctors told her that they were scared the infection would spread from one tooth that was abscessed.

"There is blood all over him, all over his shirt," she told 14 News, "and my husband is droopy eyed, not responsive."

Amanda said they called an ambulance and that her husband had to be resuscitated twice on the way to the Hospital.

Grisby doesn't remember much from the incident but won't forget what it felt like when he realized his teeth were missing.

Grisby still has blood clots as a result of the surgery and says he still doesn't know why his teeth were removed.

The dentist and dental office haven't commented on the incident, WRTV reports.

They plan to file a malpractice suit.

According to WRTV6, Karen Cantou Consulting sent a statement on behalf of White River Dental Saturday that said:

Dr. Aaron Strickland of White River Dental in Columbus, Indiana states that due to HIPPA, the Health Insurance Portability and Accountability Act of 1996, he is unable to respond to media about any patient allegations directed toward himself or his dental practice without express written consent from the patient or patient representative. The law does however permit him to utilize specific, case related, patient information in order to defend him should litigation ever arise.

"Every patient and issue is different and we evaluate each and every part of the oral cavity and the health of the patient before presenting a treatment plan. I assure you that every patient and/or legal guardian has the treatment explained to them thoroughly, and all the proper consent forms are signed prior to any treatment being performed on any patient at White River Dental. I, as well as all of our well trained staff, strive in every situation to make sure the patient and/or legal guardian understands all issues that may arise prior to accepting the treatment plan, as well as making sure they understand our due diligence in securing positive final results," said Strickland.

Dr. Strickland states that he was born with a congenital birth defect that has resulted in 18 oral related surgeries. "Because of my own dental history, it has been my life goal to be the best dentist I can possibly be and to treat my patient in the way that I want to be treated," he said.

More from Rare:
Conservatives should understand why Black Lives Matter despises Bill Clinton
Devastating news for fans of Tom Jones and members of his family
If you thought Guns N' Roses would be any less epic in 2016 you thought wrong