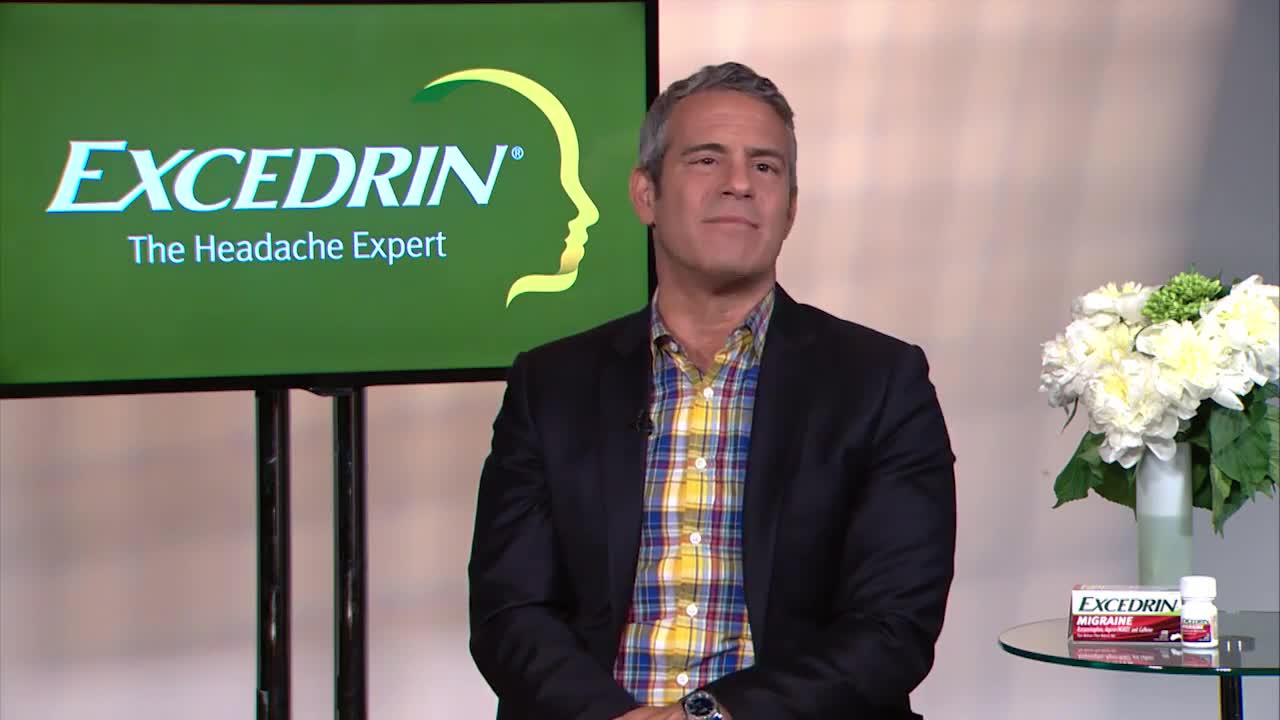 It's no secret that Andy Cohen is a busy man: Between running the "Real Housewives" empire, hosting "Watch What Happens: Live" every night and manning his radio show, "Radio Andy," the TV personality is a man of many talents.

Though it's hard to believe, the "Real Housewives" franchise has been around for over a decade, with the first episode of "Real Housewives of Orange County" premiering back in March of 2006. Since then, Cohen has been a fixture on the television sets of reality TV junkies around the world as the ever-popular franchise has expanded to nine U.S. cities spawned six international editions.

SEE ALSO: Julianne Hough has a hilarious name for her 'problem area'

For each of the domestic editions, the 47-year-old hosts his now-infamous reunion specials with the Housewives that often result in bigger arguments than we see throughout each season of the franchise. To be sure, they make for some of the most enthralling hours of reality television currently on air and have continually driven incredible ratings for Bravo.

We talked to Andy Cohen the morning after last week's "New York" premiere about the "Housewives" franchise, his friendship with Anderson Cooper, his debilitating childhood struggle with migraines and how he deals with Twitter trolls (He lets his loyal followers do the dirty work.)

Andy Cohen talks 'Real Housewives,' social media and his friendship with Anderson Cooper
I'm teaming up with @Budweiser to help put a stop to drunk driving. Comment using #GiveADamn, and they'll put $1 for Safe Ride Programs. @Budweiser and Helen slay this important message: http://bit.ly/giveadamn_20
#RHONY PREMIERE NIGHT CROSS-EYED SELFIE! Dorinda, Lu, Sonja & the newest Real Housewife of NYC, Jules! Catch them tonight at 9 and I'm live w/ Bethenny right after on #WWHL
Check out my @radioandysxm Town Hall with @camerondiaz tomorrow morning and On Demand on the Sirius app!
If loving this mustache is wrong then I don't wanna be right. And I'm in the middle of shaving so you won't see it again -- haters need not comment!! 👍🎉👊🏼
GREAT BOOK ALERT! #therainbowcomesandgoes is a beautiful book that will resonate for all generations, especially mothers & their sons. It's by @andersoncooper & his mom #GloriaVanderbilt - riveting, touching, dishy, funny and surprising. And a great Mother's Day gift! It's out today!
Nene joins the reunion tonight -- It's a really dramatic conclusion!! #RHOA
Reunited #DogLove #AdoptDontShop
AC2 in NEW ORLEANS (6/24) & AUSTIN (6/25)! tickets on sale NOW! Go to AC2Live.com for more info!
Balancing act over Mustique ☀️
Truth be told, this bunny rabbit is scaring the crap outta me 🐰
Sheree! Phaedra! Porsha! #WWHL at 11!
Scarface Miami for @brucebozzi 50 #BB50
A birthday hug for @sarahjessicaparker! Always a dream date with you 💗💗💗💗💗
This is gonna be GREAT!!! Rachel Dratch & @theprettymess live! SPECIAL TIME -- 10pm! #WWHL
God Loves a Terrier! And I love Catherine O'Hara & Eugene Levy! #WWHL
It's @broadcity night on #WWHL - can't WAIT for @ilanusglazer & @abbijacobson to peg us all!! At 11!
Crashed a wedding in Santa Barbara on my way to the pool! 12 Groomsmen! #jollycaliwedding
AC2 in the OC! See ya tonight, Costa Mesa! Still some tickets for Santa Barbara tomorrow night! AC2Live.com
Tina Fey tells me a thing or two at 11! She's here with Kim Barker, the reporter she plays in her new flick! #WWHL
TONIGHT AT 8:30: One-On-One with Kim Richards.
Didn't realize how badly the Clubhouse needed a Grammy til @chrissyteigen gave me @johnlegend's first (of 10, he won't miss it)! @bravowwhl
1000th EPISODE PRE PARTY! @kchenoweth @chrissyteigen #TheGayShark @therealwacha & more at 11! #WWHL1000
She's real! @jlo is live! #WWHL
Another bucket list moment: played myself on #insideamyschumer today! I can't wait for you guys to see #IASSeason4 in a few months. And thank you, @amyschumer
Go back to 1987 this morning on @radioandysxm when @therealsusanlucci joins me and we hear (for the first time) the interview I did with her in 1987 (I was 19) that changed my life. It is the gayest piece of audio in existence. Live from 10-12 EDT
From the cast of #Friends to @neneleakes - live at 11 on #WWHL
Happening now in West Hollywood, CA ☀️
Happy 15th Anniversary @kellyripa! I loved being a surprise guest today and had I not choked when I came out, would've said how proud I am of you. Nobody does it better!
Olivia Wilde, Ryan Reynolds, Salt N Pepa!!!!! We are gonna bust a move at 11!! #WWHL
Started the day w/ m'mates @Edelman11 & @russelltovey at @JosephAbboud's beautiful show, wearing the designer. I love a Jew in sports! And a blond Brit! #MadeInAmerica #nyfwm #josephabboud #JewsInSports #BlondBrit
Here's the selfie I took with @khloekardashian's butt! It is really something to behold! Proud to have two Kardashian Ass Selfies! #belfie #WWHL
#RHOBH originals live in the Clubhouse! @KyleRichards18 @TheRealCamille #WWHL #pernicious #morallycorrupt #suchaneffinliarcamille
Up Next

Check out our full conversation with Andy Cohen below or watch the video above:

First of all, congratulations on the premiere of the new season of the "Real Housewives of New York" -- how has the reception been?

People seem to love it! Did you see it?

Of course! Also great to see Bethenny on "Watch What Happens Live!"

I'm glad you enjoyed it!

I'm sure that all of those "Real Housewives" reunions have brought forth their fair share of stressful moments for you. What have been some of the most stressful reunion moments over the years?

Getting pushed by Teresa that one year was fairly stressful, and that was the least of it -- that was just a hairy reunion! I would also say the reunion in Atlanta where Porsha and Kenya kind of got into it was very stressful. The season 4 New York "Housewives" reunion was quite stressful -- that was the one right before we kind of cleaned house. But I'm kind of immune to it, now, if you really want to know the truth.

2016 has been a huge year for the "Real Housewives" franchise -- between the additions of "Dallas" and "Potomac" and the amazing addition of Erika Gerardi on "Beverly Hills," a lot of amazing new faces have been added. How do you prep the new "Housewives" on what they're getting themselves into?

You know what, there's almost no prepping them, because they'r literally thrown from obscurity into the national spotlight. I saw the Potomac Housewives at a Christmas party -- and they were launching about a month later -- and I said, "Listen, just stay off social media."

It's impossible to stay off social media, because you want to hear what people are saying about you and the show, but then you look and they're making fun of your appearance and saying rude things to you and judging how you treat your husband or your kids and friends. It's really difficult.

How do you personally deal with all of the negativity on social media?

I'm pretty thick-skinned at this point, so luckily I've kind of heard everything. Sometimes I will fight with people, though, and if somebody says something especially mean I'll just retweet it and let my followers eviscerate that person. Something that usually get under my skin is when someone is just blatantly homophobic -- I'll go after them. But, typically, I'm used to it.

What can we expect from the upcoming "Real Housewives of Dallas"?

If you're a "Housewives" fan, you'll understand the reference: It reminds me of early seasons of "Orange County". It's about their friendships, and it's very localized. It's down-home and very Dallas.

You wear many hats -- you're the executive producer of the "Housewives" franchise, you host "Watch What Happens: Live" and "Radio Andy" and you've written twobooks. How do you balance it all and find moments to keep calm?

I think my dog is a great help, actually. I just feel like he's grounded me so much, and he's wonderful. This morning I was getting up at an ungodly early hour, and thank God for him! He was laying there looking so cute, and it made me feel okay about being up so early.

Does he also cause his fair share of headaches?

He does! [Laughs] Once he bit Anderson Cooper right before we went on my show, because he thought Anderson was trying to take a bone I had just given him.

Speaking of Anderson Cooper, you two have been hitting the road together for the AC2 tour. What has that experience been like?

It's so fun! We go to Austin and New Orleans in June, then we've got St. Louis in October. We have a blast -- we really have the best time together. I was just texting with him; we have a very unusual friendship. We're both on live TV every night -- it's funny, it's no wonder that I'm good buddies with him and Kelly Ripa, because there are few people that are on live TV every day in the way that we are, even though we're doing different types of shows. We have an understanding of each other. He's a very loyal friend, and we have very nice chemistry on stage together.

And we have a lot of fun, which is the most important thing.

Have you guys given each other pointers on those live TV experiences?

Yeah, if something bad happens, he's someone who I'll commiserate with and vice versa! We're kind of each other's cheerleaders -- it's good to have him in my corner.

You're partnering with Excedrin to unveil The Migraine Experience. Are migraines something that you have had to deal with personally?

I dealt with migraines as a kid, and thankfully I outgrew them. But 36 million people are not so lucky and suffer from migraines. Excedrin has launched something called The Migraine Experience, which is the world's first augmented reality migraine simulator, where you can experience the effects and symptoms of migraine with none of the pain. The idea is to foster empathy for migraine sufferers.

Have you seen people go through The Migraine Experience in person?

Yes, I have! It's quite effective. I saw people do it with their loved ones who were migraine sufferers. It really works, because it makes them understand what their partners or loved ones or coworkers are going through. It was quite interesting -- they empathized in a way that they hadn't before.

More from AOL.com:
Rihanna has officially been No. 1 in our lives for as long as the Beatles
Federal appeals court tosses 'Sister Wives' lawsuit over Utah's polygamy ban
Singer Bryan Adams cancels Mississippi show to protest same-sex law