Exploring the Middle East: A travel diary of Dubai 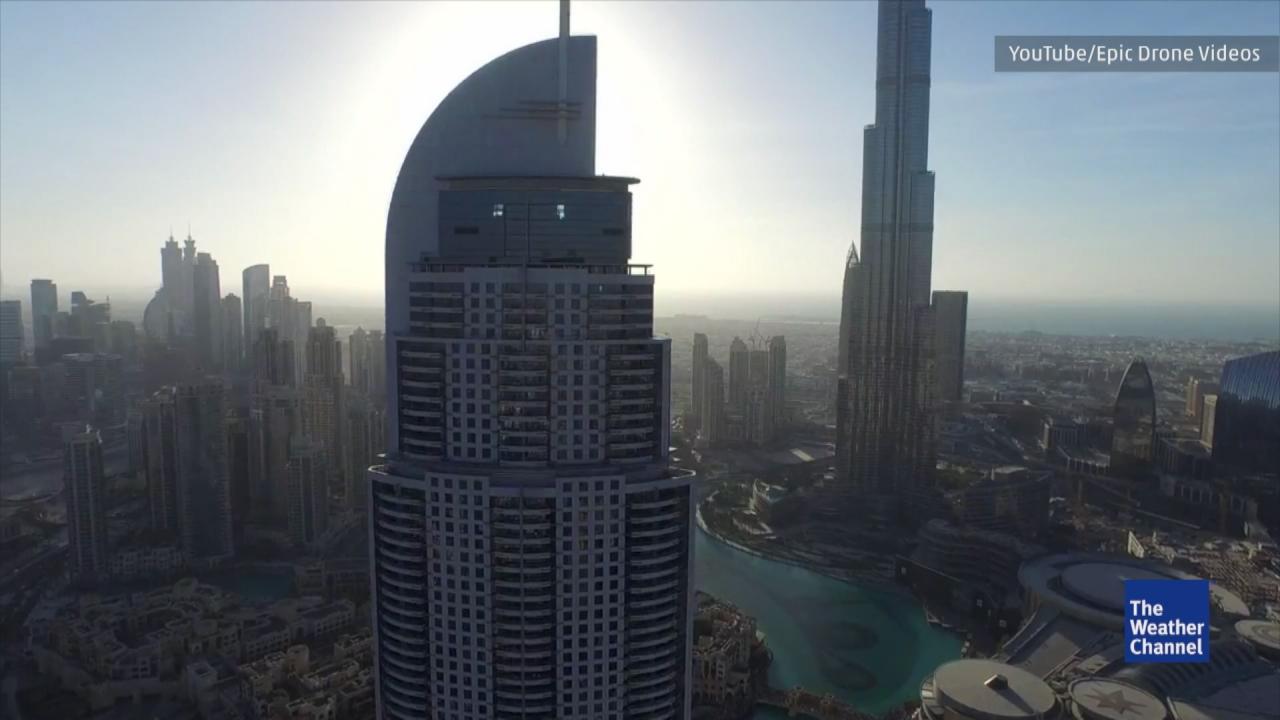 I must admit. My knowledge of Dubai before visiting the city consisted of Lawrence of Arabia and Sex and the City 2, dotted by an apprehensive feeling of both fear and curiosity of the unknown. We live in a day where oftentimes the media paints an unsavoury divide between the West and the Middle East. At the crux of that division for me, or perhaps, as a synecdoche of it, stands the symbol of a woman. I travelled to Dubai as a Western, non-Islamic woman. I wear spaghetti straps, I live with my boyfriend before marriage, and I do not speak Arabic. When I was handed a cultural guidelines PDF before the trip, I remember thinking to myself, "Omg, watch. I'm probably going to end up in jail."

I can honestly say that I was ignorant and thus, scared. Was it going to be safe? Would Emirati women look down on me in the streets? Would I feel repressed? I didn't know what to expect. I thought any attempt at luxury in Dubai would be as extravagantly contrived as Las Vegas and a contrived extravagance. This is what I thought. Me, educated and open minded, had the most misconceptions ever, lined up and ready to go.

And just as well, because perhaps I wouldn't have been able to appreciate how breathtakingly progressive Dubai is if I hadn't come with so many worries. I embarked on my journey to experience the Dubai Food Festival, a 17-day program that happens during March, showcasing the culinary offerings of both local and foreign cuisines, but discovered much more than amuse bouches and Michelin stars. I discovered a whole new world, actually.

Spending seven days in Dubai, this was my first ever experience of the Middle East. I'm truly captivated by the history and the culture, and admittedly, have only scraped the surface of all there is to know about the UAE. But I can certainly speak to my time there, tell you where to shop, what to eat and how to dress. I even got the low-down on what Emirati women think is attractive about what men wear, and vice versa. Is there such thing as a Man Repeller when it comes to traditional dress? You bet there is! (I'll be writing a post dedicated to that soon!

Check out Jetset Justine's Dubai travel diary in the slideshow below

Exploring the Middle East: A travel diary of Dubai

THE FLIGHT, A LA JENNIFER ANISTON

I seriously don’t know why Jennifer got so much backlash for her Emirates Airlines ad. It IS INDEED a nightmare to fly some of the other American and Canadian carriers on a long-haul flight. It’s not about being rich or poor, per se, it’s about the standard of luxury that even the most budget-friendly airlines should strive for. Flying Emirates Business Class to Dubai was a flight of a lifetime. There’s a bar at the back of the plane where food and drinks are served around the clock. My seat went into a flatbed, with an added mattress, noise cancelling headphones and windows that dim automatically. The entertainment system alone is the best I’ve ever seen. And for the first time ever, I was able to sleep on a plane. Sure, the perfectly made beverage delivered to-my-seat with three olives definitely helped. (Don’t even get me started on the Business Class lounge in the Dubai airport on the way home… it was luxury beyond).

THE UAE CUSTOMS OFFICERS, HOW YOU DOIN?

One thing I was most shocked about in the UAE was how absolutely charming the Arab men were. To be quite frank, I really was weary about any male attention. I expected to be treated like an ‘outsider’ or a ‘threat’ to their culture and customs. Just as I landed, even the customs officers were all smily and friendly. I felt automatically at ease. I was just a girl standing in front of a guy asking him to let her into the country. Another one of my misconceptions totally unravelled. But don’t tell my boyfriend about all the eye candy I saw on my trip….

Ok. We stayed at probably one of the most beautiful, and oldest, properties in the city. The Madinat Jumeirah is definitely somewhere I would stay again. Their private beaches, pools, 3-kilometre river complete with abras that will take you around the entire property; 40 restaurants, a gorgeous spa, mind-blowing gym (legit), a Souk, and the most breathtaking views of the Burj Al Arab from the various lookout points. The hotel even has a sea turtle conservatory that has rescued hundreds of turtles since its inception. If I had more time to hang around the hotel, I would probably have spent all my time at Shimmers Beach Lounge. Yes, the picture I took of the Burj Al Arab is the very one that went viral on Instagram. *brushes dirt off her shoulder.

Like in Toronto, brunch is becoming an institution in Dubai. However, unlike in Toronto, you can’t show up in ripped jeans and last night’s makeup. Yes, brunch in Dubai is as lavish as some weddings I’ve been to. Maybe even more. The best place for brunch (and my absolute favourite meal of the entire trip) was Friday brunch at Ewaan in The Palace Downtown. Russian caviar, Canadian lobster, Alaskan king crab, a selection of French cheeses, a grill station that does the most succulent rack of lamb, and bottomless premium bubbly were only some of the highlights. It will set you back AED 695, which is about $245.00 CAD. But take it from me – it blows Colette out of the water. Kinda like the Dubai Fountain show, which you can watch as you throw back a dozen oysters.

You know me, just looking for unaffordable, unattainable wedding venues everywhere I go. Well, Pierchic, is quite possibly one of the most romantic restaurants I’ve ever seen. Located at the Madinat Jumeirah hotel, you’ll find the restaurant at the end of the pier, with a splendid view looking back the Madinat Jumeriah property as well as the Burj Al Arab, from the water. My favourite thing about Pierchic is their crafty use of the pier – as you walk towards the restaurant, you’ll see small, intimate, platforms that jet out into the water. One is a 360 degree bar with chairs all around, the other has a private dining space where you can spend all night under the stars, which exactly where we were seated! It’s the perfect place to celebrate a special occasion or like if it’s your last night in Dubai – I would spend it there.

Probably the best place for a photo opp in the entire city, the highest outdoor observatory at Level 148, I cannot tell you how humbling it is to visit the top of the Burj Khalifa. The building and surrounding areas are a true testament to Dubai’s architectural achievements. You could easily do the Burj Khalifa in the morning, then head over to The Palace Downtown (right across the Dubai fountain) for brunch. And for those who have a fear of heights, the elevator is not glass and you don’t even feel like you’re ascending to 555 metres above ground – I was a bit scared before heading up – but it was a total breeze.

If only there was a place like this in Toronto’s financial district to have an extra-long business lunch (nudge, nudge). Intersect by Lexus is a unique intersection of luxury design, art and culture located in Tokyo and Dubai – FYI, the next one opens in New York City. It’s the perfect place to have a yummy lunch, purchase a selection of world-class products, sit and read a book, have a coffee. My 72-hour cured Chilean sea bass. glazed with a smoked onion puree, pak choi and yuzu dressed turnips was such a treat. This was my second favourite meal.

By chance, we got to meet owner, Chef Corrado Pani and the first thing he said to us? “Do you guys wanna try some pizza?” Um, the answer to pizza is always yes. His state-of-the-art oven, imported directly from Italy, makes it like they do in the motherland. Fresh buffalo mozzarella, some tomatoes, a little basil, a little olive oil, and lots of love, is how they do it at Solo. A Sardinian chef living in Dubai making Italian food wins the Time Out Dubai’s Best Restaurant of 2015 award? Makes sense

If you’re a coffee-lover like me, and you’re ever in Dubai, RAW Coffee House cannot be missed. It’s casual, it’s interesting, it’s a little bit grassroots and there’s nothing like it in the world. New Zealand ex-pat, Kim Thompson, opened the roastery in 2007 after moving to Dubai and not being able to find good quality coffee. When she talks about her company, one that strives to produce Dubai’s only 100% locally roasted, 100% organic, and 100% ethically traded coffee coffee, you can tell she’s put a lot of blood, sweat and tears into it. She has overcome so many obstacles getting beans into the country – and shipping her coffee out – but there are still so many challenges. This is why she only produces what she needs to avoid waste and excess costs. The result? One of the best cups of coffee I’ve ever had. I brought a pound of Ethiopian blend home and I’m almost done the bag and I legit don’t know how I’m gonna switch back to Pike Place after this. Kim, if you’re reading this, you need to start exporting to Canada!

I DIED AND WENT TO SHOE HEAVEN

Shoe lovers? You’ll be happy when you arrive at Level, Shoe District in The Dubai Mall. Every single shoe brand you’ve ever heard of is available there – and even ones you haven’t. I fell in love with the No 21. x Kartell knot PVC sandals and am kicking myself to this day for not buying them. Guess what? They’re sold out everywhere in blush, size 37.

WHAT TO WEAR ON A DESERT SAFARI? (AND HOW TO TIE A HEADSCARF)

Also like in SATC 2, a camel ride through the desert – or skirting the sand dunes in a 1940s Land Rover – is a must. I highly recommend the Platinum Heritage Desert Safari. It’s a wonderful way to spend your afternoon and evening. The safari ends in a traditional Bedouin dinner under the stars with folklore performances and delicious Moroccan tea. It truly is something I will never forget (and also probably never want to do again as I don’t think I will ever be able to repeat that initial feeling of being alive in the Dubai Desert for the first time). This is the type of experience I say you do once, and go all out. They will even teach you how to tie a headscarf!

Want to see more? Check out more images from her trip

More on AOL.com
This is the best time to book a hotel room
These new overwater bungalows are what vacation dreams are made of
5 tips for getting upgraded to first class