This train track optical illusion has derailed the entire internet 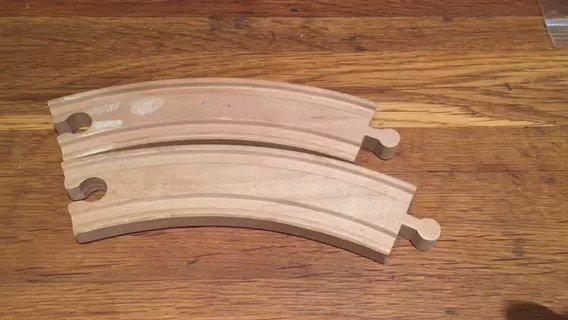 When Marc Blank-Settle posted a video on Twitter on April 6 that showed how his toddler's train set was freaking him out, he probably never expected it to strike such a nerve.

The perplexing clip shows Blank-Settle moving around two wooden track pieces that appear to be different sizes -- but when he stacks them on top of each other, they match up perfectly.

My toddler's train track is freaking me out right now. What is going on here?! pic.twitter.com/9o8bVWF5KO

"My toddler's train track is freaking me out right now. What is going on here?!" read his tweet, which has now amassed over 2,600 retweets and likes from equally baffled parties.

But apparently, Blank-Settle isn't the first man to notice this phenomenon.

The father, while unknowingly, was actually demonstrating the The Jastrow illusion, which is an optical illusion discovered by American psychologist Joseph Jastrow in 1892.

In this illusion, two figures that are identical (i.e. the two train track segments) appears to be different sizes while lying perpendicular to each other on a flat surface -- the lower one appearing to be larger.

However, the illusion can be broken by stacking the objects directly on top of one another, revealing that they are, indeed, the exact same size.

Science or SORCERY? You decide.

RELATED: Check out these other fun viral puzzles: