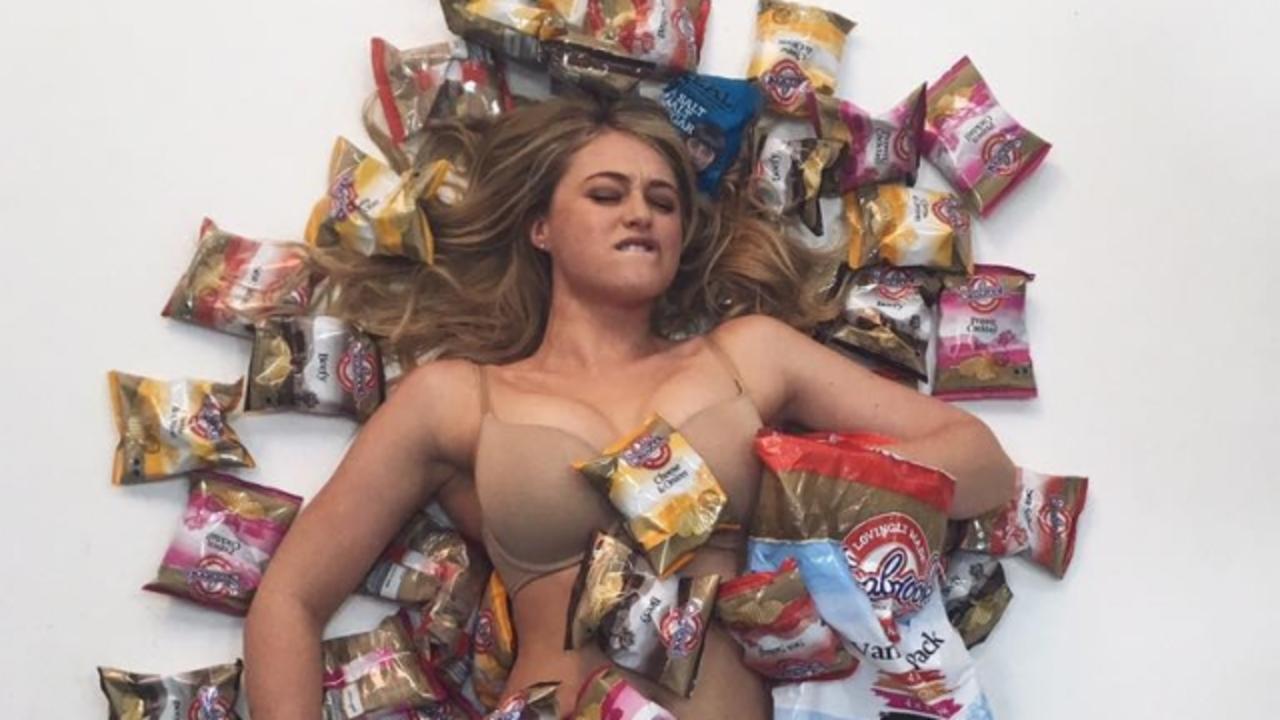 If you haven't heard of Iskra Lawrence before, get ready to be absolutely obsessed with her.

Lawrence models for Aerie, among other companies, and often runs social media Q&A sessions dealing with topics like body image.​

Last week, Lawrence shared this vacation photo of her bikini-clad self with her Instagram followers.

And of course, as people tend to do these days, someone said something negative about her figure.

"Fat cow. It's only cus every F****r on this planet is obese that that's the norm..." said Instagram user and self-described health expert @zseanzbrown. "Plus-size models? give me a F*****g breaking. Everyone needs to stop eating McDonald's, the NHS is f****d because of people like her eating too many bags of crisps."

Unfortunately, comments like these are nothing new to the plus-sized beauty. "People tell me all the time on social media hateful things, but it doesn't affect me," Lawrence, who regularly uses the hashtag #everyBODYisbeautiful in her posts, said in an interview.

But while normally Lawrence would just shake off this kind of nonsense and refuse to feed the trolls, this time she says, "I just couldn't help myself."

In response to the hateful comment, which called Lawrence a "fat cow," the model posted a picture of herself in her underwear surrounded by bags of potato chips. The caption? "This is for anyone who has ever been called FAT."

But she didn't stop there.

Lawrence followed up her first post with a second -- this time, a slow-mo video of herself eating a bag of chips in her underwear.

"I do not condone binge eating," Lawrence clarified in her post. "I eat whatever I want in moderation. I will eat crisps but I'll also make healthy home cooked meals and workout regularly."

"The message is who gives a F what anyone else thinks of you. YOU are the only one who decides yourself worth." Iskra Lawrence, Model

When it comes to body shaming on social media, we all know the drill: Itdoesn'tendwell forthe haters.

Others, like Ashley Graham, have graced the covers of fashion magazines all over the world to change the way the industry views the female body!

This British model responded to a body shamer with the most epic photo of all time
My #wcw goes out to this freaking BOMBSHELL over here!!!💣😚 she's beautiful from the inside out in a society that judges beauty from the outside in! Thank you @theashleygraham for being unapologetically yourself!!👏 they said it couldn't be done and now they ask you how you did it😎 Thanks for being REAL #arealwoman #worthit #yougoglencoco #yesthatwasameangirlsreference #dealwithit #itwasaneducationalfilm #thinkaboutit #ashleygraham #shesbeautiful #andsoareyou #youarebeautiful #donteverforgetthat
#wcw#ashleygraham
Not only is she gorgeous but also helps other women love their bodies 💕 #wcw #ashleygraham #sexy #beautiful #motivationalspeaker #stopbodyshaming #thickandbeatiful #curves #imnoangel #lanebryant #goal
Ashley Graham #wcw
#ashleygraham 🙌🏻🙌🏻🙌🏻🙌🏻🙌🏻
Thank you to Plus size model #AshleyGraham for showing #Elle mag and the world that curvy gals are gorge! Thanks for repping us properly Ash! I also love what she had to say about sex before marriage: an even more personal note, Graham also made a surprise confession: She's decided to give up sex before marriage. "I had to reclaim my body, my sexuality, and my image. It was the best thing I've ever done," she said. "You don't wake up with regrets. I'm not having a man decide what he's going to do with my body; I'll decide." @Elleuk
#IAmSizeSexy
#WomanCrushWednesday the gorgeous Ashley Graham 💜💜💜 for helping me embrace myself for who I am #WCW #AshleyGraham #curves #bodyPositive #plusSizeModel #beautiful #perfection #selfLove
'Woman Crush Wednesday' coz @theashleygraham is legit stunning!! #wcw #womancrushwednesday #ashleygraham #honourmycurves
Up Next

More from AOL.com:
#VanLife creator Foster Huntington on the trials and tribulations of running a viral blog
We're not sure how this bizarrely designed house in Washington is even standing
The craziest moments from NYC's International Pillow Fight Day