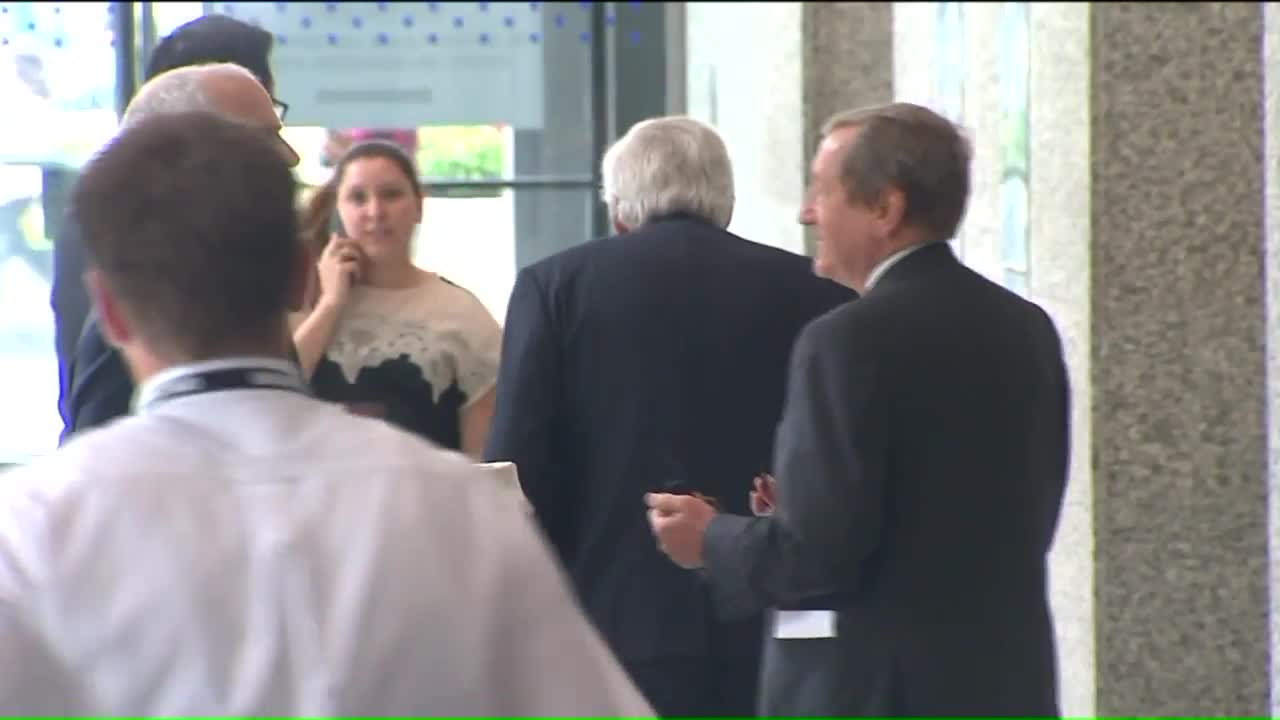 Authorities believe there are credible claims from at least four people against the 74-year-old, who was once a high school teacher and wrestling coach before stepping into politics.

The new information identifies three men whose allegations of abuse span more than a decade when they were teenagers and Hastert was their coach, according to Tribune. One has since died.

RELATED: Dennis Hastert through the years

Sources: At least 4 sexually abused by Dennis Hastert
Former U.S. House Speaker Dennis Hastert leaves after a guilty plea at Dirksen U.S. Courthouse on Wednesday, Oct. 28, 2015 in Chicago. (Zbigniew Bzdak/Chicago Tribune/TNS via Getty Images)
WASHINGTON - NOVEMBER 15: Former Speaker of the House Dennis Hastert (R-IL) walks through Statuary Hall on his way to the House floor to make his farewell address to Congress November 15, 2007 in Washington, DC. He announced his resignation today and said he will leave office before the end of December. Hastert, 65, announced in August he would not seek reelection in 2008. Hastert was the longest-serving Republican speaker in U.S. history, and the first speaker since 1955 to remain in Congress after losing the speakership. (Photo by Chip Somodevilla/Getty Images)
Dennis Hastert, former speaker of the US House of Representatives, attends the annual meeting of the Iranian resistance, presided over by the National Council of Resistance of Iran (NCRI) in Villepinte, near Paris, on June 22, 2013. Some 500 parliamentarians from the United States, Canada, Europe, the Middle East and Arab countries were expected to join the gathering on June 22, one week after Hassan Rowhani, a moderate cleric, was declared winner of Iran's presidential election, ending an eight-year conservative grip on the Islamic republic's administration under Mahmoud Ahmadinejad. Maryam Rajavi, president of the NCRI, denounced the 'sham election' in Iran and called on the West to stand firm with respect to Hassan Rohani, 'responsible for the machine or repression'. AFP PHOTO / JACQUES DEMARTHON (Photo credit should read JACQUES DEMARTHON/AFP/Getty Images)
WASHINGTON - JULY 28: Former House Speaker Dennis Hastert (C) is joined by current Speaker Nancy Pelosi (D-CA) and Minority Leader John Boehner (R-OH) during a ceremony unveiling Hastert's portrati at the U.S. Capitol July 28, 2009 in Washington, DC. Hastert is the longest serving Republican speaker to date, holding the post from 1999-2007. (Photo by Chip Somodevilla/Getty Images)
Up Next

Tribune reached out to the other two men who are identified in federal court records as Individuals A and D, but one declined to be interviewed by the paper.

Individual D spoke to Tribune at length and may even appear at Hastert's sentencing in federal court on April 27. Hastert, who is in failing health, hasn't specified any wrongdoing -- but has expressed humiliation and shame.

"First and foremost, Mr. Hastert is deeply sorry and apologizes for his misconduct that occurred decades ago and the resulting harm he caused to others," Hastert's lawyers said Wednesday in a court memo.

More of the lengthy investigation from Tribune stems around Individual A. The man allegedly held secret meetings with Hastert, which spanned several years and included money exchanges that ultimately led to financial crimes.

By the time federal authorities stepped in to question Hastert about the transactions in December 2014, at least $1.7M was paid to Individual A.

Individual D spoke privately to the newspaper and explained his interaction with Hastert while a student at Yorkville High School in Illinois. He has been asked recently by prosecutors to step forward to read a victim-impact statement, according to Tribune. Individual D claims there was sexual misconduct.

U.S. District Judge Thomas Durkin has made clear he's free to sentence Hastert to up to five years in prison -- while lawyers have urged the judge to offer him probation because of Hastert's deteriorating health.

Read more about the Chicago Tribune's investigation here and about Individuals A and D.

RELATED: Jolene Burdge speaks out about her brother's allegation of sexual abuse by Dennis Hastert

More from AOL.com:
Alleged child predators caught in undercover April Fools sex sting
Blame your GPS for your bad sense of direction
Here's the flight attendant who was fired for using emergency exit