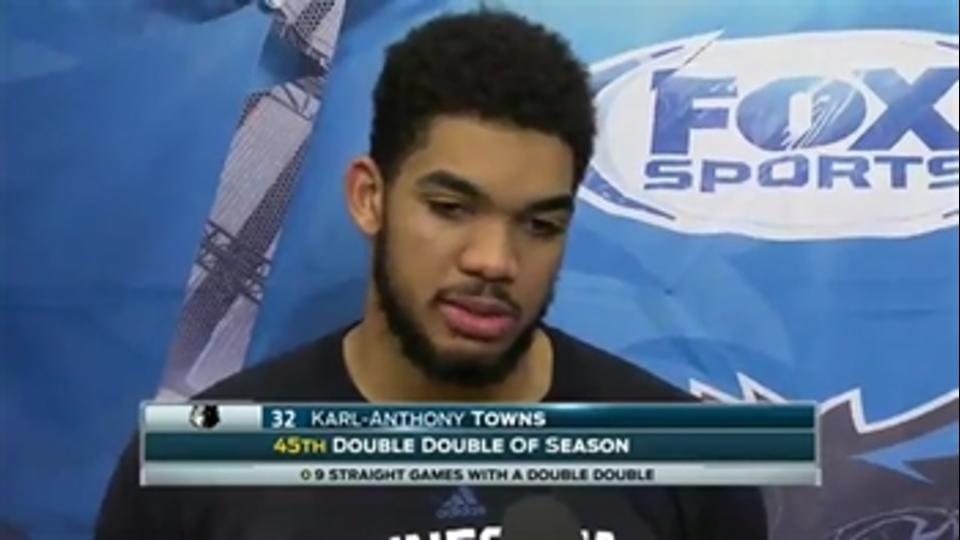 In some ways, Karl-Anthony Towns' stellar rookie season has gone under the radar.

The 20-year-old big man is averaging an incredible 18 points on 54% shooting, 34% from 3-point range, with over 10 rebounds and nearly 2 blocks per game for the young, promising Minnesota Timberwolves.

While other rookie stars like Kristaps Porzingis have slowed down with the grind of the 82-game schedule, Towns has kept rising, practically assuring he will win Rookie of the Year.

On Tuesday night, Towns gave the NBA world a glimpse of why he's the future of the league. He scored 20 points with 12 rebounds, 4 assists, and 2 blocks in the Wolves' come-from-behind win over the Warriors. On a crucial overtime possession, Towns got switched onto Stephen Curry, which led Curry to pull the ball back and take Towns one-on-one.

Towns shut him down:

Curry and the Warriors thrive on these situations. When Curry runs a pick-and-roll, he can lose his defender over the pick and wreak havoc in the lane. Go under the screen and he'll nail the three. Switch a big man onto him and he'll burn him. That wasn't the case against the 7-foot Towns.

Towns' versatility might be like looking into a mirror for the Warriors. Their own Draymond Green has baffled the NBA with his below-average height (6-foot-6) but point-guard-esque playmaking, shooting ability, and defensive dexterity. Towns isn't on-par with those skills yet, but he's working on them, and he's bigger than Green. He can reliably stretch the floor, he's got the makeup to be an All-NBA defender (as seen above), and he can be a brilliant passer in small doses.

ESPN's Sherwood Strauss noted how impressive Towns has been — he's been a problem for the Warriors, perhaps the best team in NBA history:

Thing that stuck with me: How many guys can do what KAT did to the Warriors? Not sure GSW has a guy to cover him + he switches onto Curry

@talkhoops Has a legit argument for making an All-NBA team.

His ability to defend Curry represents something bigger. Not only are the Warriors poised to be a problem for the NBA for the next few years, the Wolves, if all goes right, have the talent to challenge the Warriors several years down the line. Towns is on track represent a thorn in Golden State's side.

Furthermore, the NBA is a point-guard-driven league. Having a big man who can extend the floor on offense, but also switch on defense and cover these point guards is no small feat. Towns looks like the prototype big man built for today's NBA.

The future in Minnesota is bright, and Towns is no small part in that.

NOW WATCH: The percentage of black players in the MLB has dropped by 20% over the last 40 years — here's a startling theory why