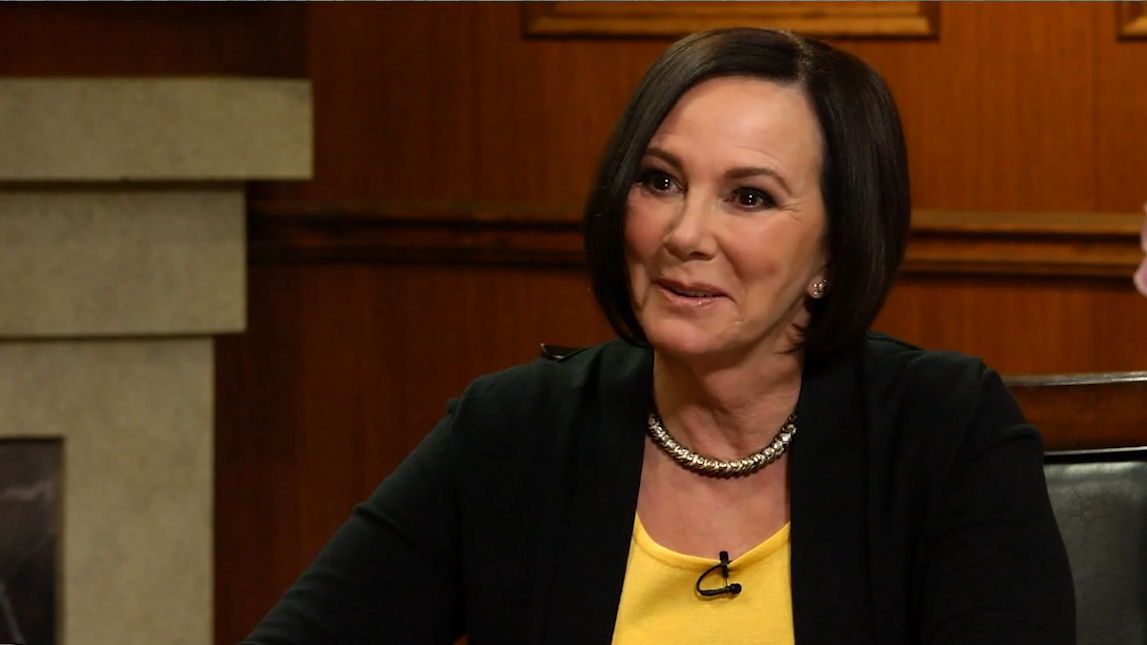 Those of a certain age group undoubtedly remember the key moments in the O.J. Simpson trial. The gloves. Judge Ito and his courtroom antics. Johnnie Cochran's impassioned plea with the jury to acquit. That Bronco chase, perhaps. But with time comes a tendency to forget.

For The People v O.J. Simpson scribes Larry Karaszewski and Scott Alexander, diving back into that case was like going down the proverbial rabbit hole. Reading Jeffrey Toobin's book, The Run of His Life, on which the series was based, was only the beginning. They claim to have 40 or 50 books sitting in their offices, including Simpson's tome If I Did It, which was ghostwritten by Pablo Fenjves -; a witness for the prosecution in the original case. They also waded through a plethora of information, footage and interviews, resulting in the script viewers have seen unfold on FX each week for the past several weeks. It all culminates with Tuesday's finale, "The Verdict."

"It was important to us that the last episode ends dramatically, but we also knew at the time that we were going to have to hint about what was going to happen afterwards," Karaszewski tells The Hollywood Reporter. "The essential thing was wrapping up O.J.'s personal story, which was that when he got out, he thought 'not guilty' meant he would be able to go back to his old life of doing Hertz commercials and Naked Gun movies. We had to communicate that his life was going to be ruined, that he could never go back to being the guy he once was."

Fitting everything into the tight timeline means that certain aspects of the trial wound up compressed (days of DNA evidence wound up warranting a dramatic three-minute scene), while other tidbits were left on the cutting room floor. Alexander and Karaszewski recall Vanity Fair writer Dominick Dunne being called away to do a Princess Diana profile in the middle of the trial, but being worried that he'd lose his seat until Ito convinced him to go. The first thing she asked about was the trial. Or an earlier script of their finale that included Marcia Clark's emergency dental surgery the night before closing arguments, in which she returned to her office immediately afterwards to continue working through the night.

"There was also a police pal of O.J.'s named Ron Shipp who was at that time working security for O.J. and had this wackadoodle story that O.J. had told him about a dream where he had killed Nicole Brown," Alexander says. "Shipp actually testified and looked O.J. in the eye and said, 'This is sad O.J., this is sad.' Then suddenly Ron Shipp was being jumped upon in the press the next day as a traitor to the black community. It's endless, how much of this stuff there was."

Once the cameras fade out on Tuesday, there are no plans for the scribes to follow-up with anymore Simpson-related projects. The duo are still disappointed, however, that they weren't able to somehow incorporate E!'s coverage of the subsequent civil trial, which included nightly reenactments of the transcripts by paid actors when new judge Hiroshi Fujisaki disallowed cameras in the courtroom.

"There's a world where other writers would have said 'Oh, fun, we'll put it in anyway.' But we didn't want to fudge anything major," Alexander says

The duo will remain on board as producers for the second season of American Crime Story, but have no plans to write it. They're also developing Toobin's latest book, about Patty Hearst's kidnapping, into a big screen adaptation for Fox 2000 now that "the ink is wet" on that tome.

"It has a lot of parallels to the O.J. trial in the sense that it was this huge case in the middle of the 1970s in which the radical kidnappers sort of used the press to push their agenda and it became a bit of a media circus as well," Alexander says. "Obviously there are like 29 more O.J. programs that are going to show up on TV -; a tidal wave, or a tsunami of O.J. projects. But I can't imagine the purpose of dramatizing anything further."

What have you thought of the series? Sound off in the comments below.

More from the OJ Simpson trial in the gallery below!

'The People v. O.J. Simpson' finale: Writers reveal what major moments didn't make the cut
Defense attorney Robert Shapiro (L) sits next to O.J. Simpson during a preliminary hearing following the murders of Simpson's ex-wife Nicole Brown Simpson and her friend Ronald Goldman July 7, 1994 in Los Angeles. (Photo by Lee Celano/WireImage)
LOS ANGELES, CA - FEBRUARY 27: Prosecutor Marcia Clark complains to the judge 27 February about a second statement by Rosa Lopez, a key defense witness, that was not released by the defense. Lopez, a housekeeper to a neighbor of O.J. Simpson's, claims to have seen a white Ford Bronco outside his home at around the time the prosecution claim the murders of Nicole Brown Simpson and Ron Goldman took place. AFP PHOTO (Photo credit should read POO/AFP/Getty Images)
LOS ANGELES, CA - JUNE 19: O.J. Simpson (R) whispers to Defense attorney F. Lee Bailey (L) during testimony of FBI special agent William Bodziak 19 June during the O.J. Simpson murder trial in Los Angeles. Bodziak compared one of O.J. Simpson's tennis shoes to a model of the Italian-made Bruno Magli shoes, which left imprints at the murder scene of Nicole Brown Simpson and Ronald Goldman. AFP PHOTO (Photo credit should read POO/AFP/Getty Images)
LOS ANGELES, CA - JUNE 16: O.J. Simpson defense attorney Alan Dershowitz (standing) gestures during a motion to Judge Lance Ito 16 June in which he said that the standard of juror dismissals must be changed. The defense has accused the prosecution of juror targeting and hiding witnesses. Seated are (L-R) prosecutor Marcia Clark and Scott Gordon. AFP PHOTO (Photo credit should read POO/AFP/Getty Images)
Deputy District Attorney Christopher Darden, one of the prosecutors in the OJ Simpson murder trial is shown during a court hearing December 9
OJ Simpson sits in court October 14 with his attorney Robert Shapiro during a hearing in Simpson's murder trial
Defense attorneys Robert Shapiro (L) and Johnnie Cochran, Jr., arrive at the Criminal Courts Building in Los Angeles September 26 for the first day of jury selection in the OJ Simpson murder trial. A protestor's painting on spousal abuse is in the background
Superior Court Judge Lance Ito makes a point during a pre-trial hearing on suppression of evidence in the OJ Simpson murder case September 21 in Los Angeles
Josephine Guarin, housekeeper at OJ Simpson's estate in the Brentwood section of Los Angeles, testifies during a pre-trial hearing on evidence suppression in the OJ Simpson murder case September 22
Prosecution witness Candace Garvey, a friend of Nicole-Brown Simpson, testifes about OJ Simpson's appearance at his daughter's dance recital June 12, 1994, during afternoon court session in OJ Simpson's murder trial
Prosecutor Marcia Clark wears rubber gloves as she places a left-hand glove found at the feet of murder victim Ronald Goldman into a plastic bag during OJ Simpson's murder trial, February 17
Denise Brown (L), sister of Nicole-Brown Simpson, cries as she testifies February 6 about Nicole-Simpson's relationship with O.J. Simpson, during morning court session in Simpson's murder trial. Brown wears "Angel" earrings and pins in memory of her sister
FILE PHOTO 16MAR95 - Los Angeles police detective Mark Fuhrman is shown on the witness stand March 16, 1995 during O.J. Simpson's murder trial in Los Angeles. A bloody fingerprint was found at the scene of the murders of Nicole Brown Simpson and Ron Goldman but police bungling destroyed it, Fuhrman says in a new book published on February 17. SIMPSON FINGERPRINT
Prosecutor Brian Kelberg points out a wound near Ronald Goldman's ear on an autopsy chart during testimony June 9 in the OJ Simpson murder trial. The Los Angeles County coroner said that Goldman received two small stabs to the neck in addition to fatal slashes, suggesting that he was taunted by his attacker before being killed
Kim Goldman, sister of murder victim Ron Goldman, reacts to the showing of a photograph of her brother's bloody shirt during the OJ Simpson double murder trial in Los Angeles June 26. The prosecution presented the final phase of its case, trace and hair evidence. **POOR QUALITY DOCUMENT
Arnelle Simpson, daughter of murder defendant OJ Simpson, testifies July 10 on her father's behalf in his double murder trial in Los Angeles. Arnelle Simpson is the first witness in the defense's case
Defense witness Robert Heidstra points during his testimony July 12 at O.J. Simpson's murder trial to the area near where he walked his dog on the night [Nicole Simpson and Ronald Goldman] were murdered June 12,1994. The chart is a map of the area around Bundy Drive, site of the murders
Up Next