Keke Palmer gets real about the importance of self-love 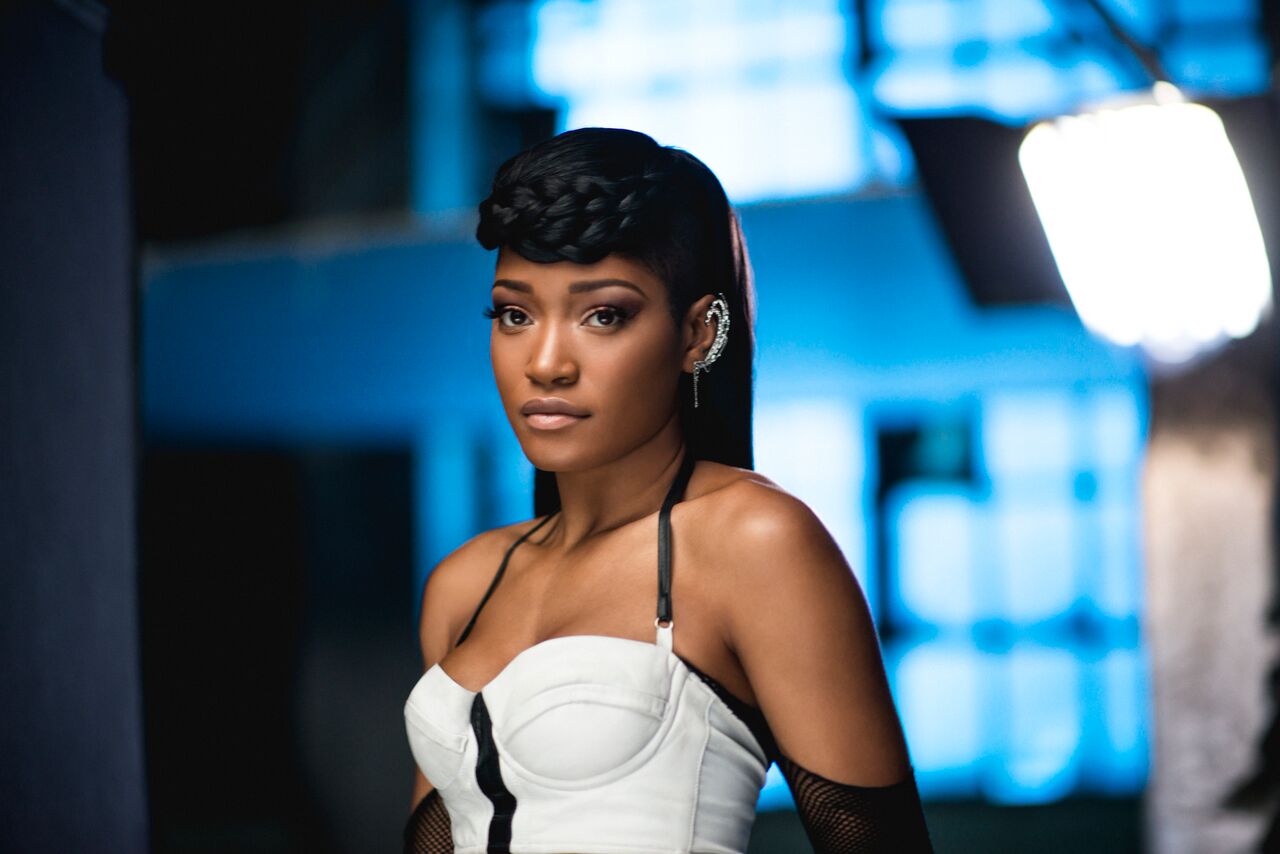 Keke Palmer isn't shy about one thing: she loves herself.

One look at Palmer's social media handles and it is clear that her outlook on life focuses on being happy in your own skin. But she didn't always think this way. Palmer admits that there was a point in her when she went through a lot of pain. It was her breaking point, and instead of being overwhelmed by the negative, Palmer looked to the brighter side in life to heal. It was with this new mindset that she came to embrace her own version of self-love -- and she hasn't looked back since.

It's a pretty rare sight to see someone like Palmer, who has lived the better part of her life in the spotlight, be so grounded. But what's even more noteworthy is how Palmer is using her past experiences to help others through social media. Whether it's an inspirational post claiming to let goals determine one's life instead of other people or a photo encouraging others to smile a bit more that day, Palmer is making a difference to all of her fans. She's become the role model that so many people need and want in their lives. And if her incredible social media following is any indicator -- Palmer has over 10 million avid followers across all her platforms -- people cannot get enough of her charismatic personality and words of wisdom.

We got the exclusive opportunity to sit down with Keke Palmer at our New York City offices, where we spoke in-depth about her upbringing in the entertainment industry, how she became a proponent of self-love, and how social media has affected her personally.

And if you want even more Keke Palmer news, head over to AOL.com at 6 p.m. ET to see more exclusive features, including how she reacted to the infamous "My Jeans" video.

“If you want to live a happy life, tie it to a goal, not to people or things.”

Do you ever remember a moment in your life when you realized that you were supposed to be an entertainer?
My mom always tells this story! To me it isn't anything spectacular, I was just doing what came naturally to me but her response to it made me realize that it was different. So I did a children's play when I was five years old and when I came out to sing my solo, the pianist didn't set up the mic at the right height. And when they started the song, my mom was so scared in the audience that she wouldn't be able to hear me. And she said what happened next was I pulled down the mic stand and pulled out the mic myself. She tells me that's when she knew that entertaining was something that I felt comfortable in. And like I said, I didn't notice anything because I felt comfortable doing it, but when she said that I said okay, people feel a certain way when I perform, so maybe I should do more of it.

You've spent the better half of your life in the entertainment industry and somehow managed to stay very grounded. What was the experience like for you?
For a long time I didn't realize the acting industry was so prominent -- the focus for my life was really centered around the fun part. My mom was my acting coach and just kept things so fun. It wasn't like I went to a studio and everything was learned, it was always mommy and me time. So I never realized that I was making money. I didn't realize any of that until I was 12 and my parents started to talk to me about it. And then they would put me on an allowance and they kept everything very normal. They put the money away and they explained to me where it was going and how much I was going to have.

It wasn't all too much too fast. And I never did any paparazzi stuff until I got older. They kept everything rigid. I did my work and then I went home. My personal life stayed my personal life and I never really mingled with too many people in the industry. I think that's why my life has that balance. As I became an adult going to industry parties and hanging out with people in the industry, that was ultimately my choice as opposed to me feeling like that was the only world I had.

You obviously didn't have a "normal" teenage life but it sounds like it was normal for the most part.
It was normal. I think in comparison to other kid actors, then it was normal. If you're not a child actor you probably see the differences and there was of course some odd dynamics. I think someone might say okay you have a different perspective than what the typical child actor would and I think that 's because my life wasn't a typical kid actor's life.

We're about the same age and I remember growing up and idolizing the people I watched especially on Disney. Was there any pressure stepping into that kind of a role where people really looked up to you?
I was so excited to be doing it! Exactly like you said, because it was a dream of mine -- also I always wanted to do the do the ears, you know what I'm talking about?

Yes! When the actors are jumping and making the Micky Mouse ears with their fingers? Like those commercial interludes?
Yes! That was a dream of mine to get to do that. And I never did get to do that because I never had a show on Disney, just the movie. But I didn't feel pressure because my mom made me feel very confident in myself. She would always say, "You know what, if this is for you then you have it. And if it isn't for you, it was never yours to begin with." She always gave me words of wisdom that made me feel okay, it never made me feel like I had to prove myself to all of these people.

You're obviously a really big proponent of self love, how did you come to that conclusion for yourself?
I experienced a lot. The thought process that I developed allowed me to be so objective about things that happened in my life, but I had to experience the pain first in order to get there. So I went through a very tough time and I realized that the only way that I would be able to get out of that was with a positive outlook, and through that positive outlook, I began to grow closer to myself and understand the importance of self-love. And it's that love that you give yourself that allows you to not take so much of the outside world personally.

And what's great is you also are very vocal and spread that message to your followers. Because of that, what would you describe your dynamic between you and your fans? I'm sure a lot of people really look up to you in the social space.
I mean I try to make myself as accessible as possible without exploiting who I am, because I still have to have my own privacy and life. But a part of what life is about is sharing your gifts with the world, whether your an entertainer, or a writer, or construction worker. Whatever it is, I feel like our duty is to manifest our visualizations in our mind. So once I realized that, I wanted to use a platform -- like Snapchat -- that would allow me to show how to go about that. I don't want people to just look at me and think, "Keke is doing this and that, and that's great for Keke." No, this is great for us. Because if I can do this, that means you can do this too. That's the message that I really want to send.

"Because if I can do this, that means you can do this too. That's the message that I really want to send. " Keke Palmer

What has social media taught you about yourself?
Personally it's taught me that you can't be obsessed with the Internet because that's not reality. What the we see on news, or online, that's one version of the world that someone is living in. And we get to see into that -- and that's amazing and awesome, but you can't take that personally. You can't compare your life to that person, or become so obsessed that you forget that you can actually make changes but only if you're aware as to what is around you. So that's one thing it taught me. It's made me realize that I have to take breaks from my phone because it can make you anxious.

On a positive end, it also taught me how awesome it is to connect with your peers and to be very careful about what messages you're sending. So when I reached the point of feeling negatively about the Internet, I then realized there has to be a positive outlook to this. That's what kind of birthed me trying to figure out a way to showcase my journey about what it is I'm doing and how I'm getting there. Because I feel like that would be useful to showcase. I didn't want to be that person that just said, "I look cute today." I'm always thinking to myself how can I have my fans something when they go to my page really walk away with something useful.

So whatever your putting into it, people are getting the same amount out.
Yes! Exactly! And that's what I feel like the point is. So many times I feel like even when you look at peoples' pages, you just end up comparing yourself to them, because that's human nature. So you're like, "Well this person is doing this and they have these many followers." And it's like I don't want to feed into that.

YouShouldKnow is a feature that showcases up-and-coming social stars. To see more of past interviews, click here. And come back at 6 pm EST for more exclusives on Keke Palmer, including her reaction to the infamous "My Jeans" video.