In Scalia's absence, unions get a big Supreme Court win 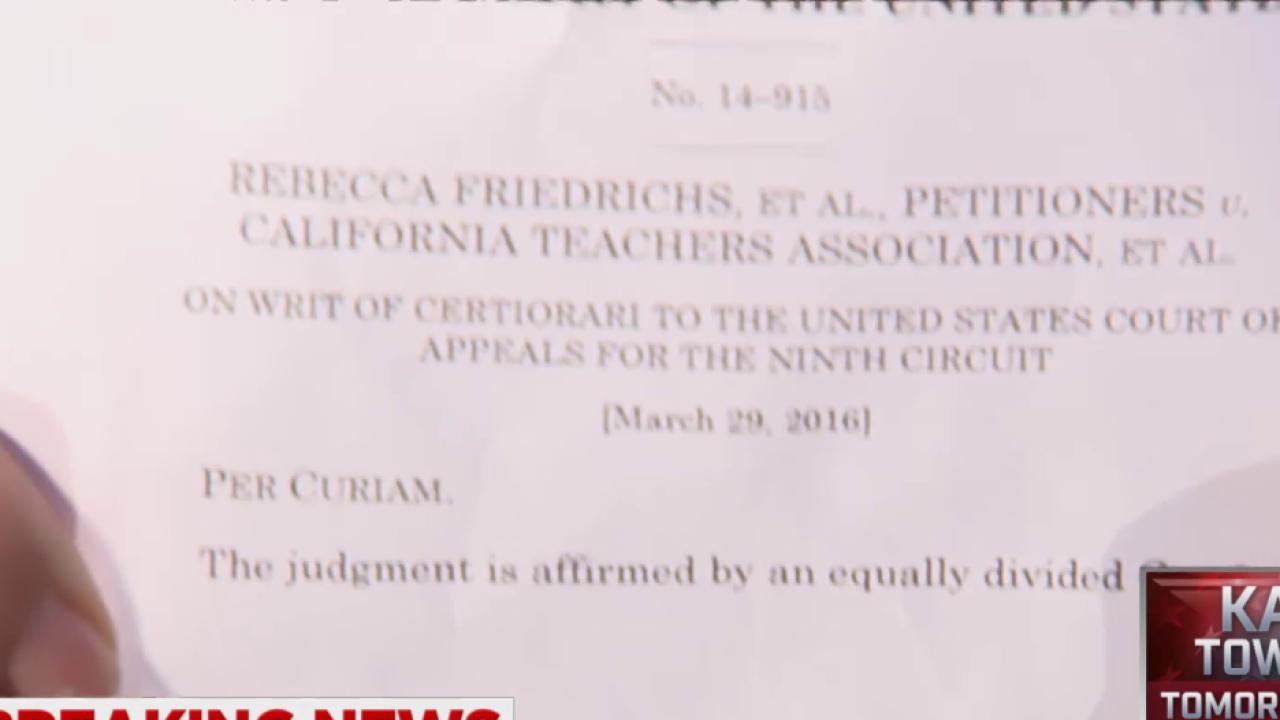 The Supreme Court on Tuesday announced it had deadlocked on a challenge to organized labor, handing unions a huge win in a case many anticipated would not go in their favor.

The 4-4 decision in Friedrichs v. California Teachers Association upholds a lower court ruling dealing with union fees and is a crushing blow for union opponents, who lost the potentially deciding vote in their favor when conservative Justice Antonin Scalia died in February.

"The U.S. Supreme Court today rejected a political ploy to silence public employees like teachers, school bus drivers, cafeteria workers, higher education faculty and other educators to work together to shape their profession," National Education Association President Lily Eskelsen García said in a statement following the ruling. "In Friedrichs, the court saw through the political attacks on the workplace rights of teachers, educators and other public employees. This decision recognizes that stripping public employees of their voices in the workplace is not what our country needs."

A decision in favor of the petitioners would have eliminated what's known as agency fees – money paid to unions by non-union members in exchange for non-political union activities they benefit from, like collective bargaining services that lead to higher salaries and professional development opportunities.

Agency fees are collected in 25 states, including California and the District of Columbia. Under federal law, unions cannot use the money for political purposes, like lobbying or voter registration drives.

The plaintiffs in the case argued that agency fees are an infringement on their First Amendment rights of free speech and free association, since collective bargaining is by nature political. In negotiating with school boards, for example, unions can take positions on things like tenure that nonmembers may not support, and therefore, teachers who decide not to join their local union should not have to contribute to those costs.

Meanwhile, the California Teachers Association and its parent union, the NEA, argued that the fees are not a violation of First Amendment rights because a portion of them is reimbursed annually, and also because the money covers things that benefit non-union members. Were it not for the fees, they said, nonmembers would be freeloading off of union members.
The 4-4 split from the justices upholds the Supreme Court's 1977 decision in Abood v. Detroit Board of Education, which held that no one can be forced to join a union or contribute to its political activities, but that teachers unions can charge nonmembers a fee to cover the costs of nonpolitical activities, including collective bargaining.

Check out some of the landmark cases the Supreme Court has decided:

In Scalia's absence, unions get a big Supreme Court win
Demonstrators carrying giant keep abortion legal buttons & ...protect Roe vs. Wade sign during huge pro-choice march. (Photo by Cynthia Johnson/The LIFE Images Collection/Getty Images)
1966: Since 1966 police have to advise a suspect that they have the right to remain silent and the right to counsel during interrogation. The so called 'Miranda Warning' after Ernesto Miranda who had a retrial because he was not so advised. (Photo by MPI/Getty Images)
1963: Petitiion by Clarence Earl Gideon to the Chief Justice of the United States against a sentence imposed by a Florida court because he had not had legal representation. This resulted in the 5th Amendment whereby any individual accused of a crime is guaranteed 'due processes of law'. (Photo by MPI/Getty Images)
African American students at a segregated school following the supreme court case Plessy vs Ferguson established Separate But Equal, 1896. (Photo by Afro American Newspapers/Gado/Getty Images)
(Original Caption) This sketch shows White House Watergate Attorney James St. Claire arguing before the Supreme Court over whether President Nixon could assert executive privilege in withholding evidence demanded by Special Prosecutor Leon Jaworksi in the Watergate cover-up trial. The Justices are (L to R), Chief Justice Warren Burger; William Brennan; Byron White; Henry Blackmun; and at right is the chair normally occupied by William Rehnquist, who withdrew from this case.
Supporters of gay marriage wave the rainbow flag after the U.S. Supreme Court ruled on Friday that the U.S. Constitution provides same-sex couples the right to marry at the Supreme Court in Washington June 26, 2015. The court ruled 5-4 that the Constitution's guarantees of due process and equal protection under the law mean that states cannot ban same-sex marriages. With the ruling, gay marriage will become legal in all 50 states. REUTERS/Joshua Roberts
(Original Caption) Schenectady, New York: Despite a ruling from Education Commissioner Ewald B. Nyquist that prayer meetings in school are 'constitutionally impermissible,' several Mohonasen High School pupils continue to hold 10 minute prayer session at the school. The school board gave permission for the meetings even though the 1963 U.S. Supreme Court decision ruled out prayer in public schools. Comm. Nyquist's ruling upset the school board's permission for the meetings, but the students, who pointed out that Congress and the state legislature open with prayers, decided to keep up the practice.
Up Next

The Friedrichs case was not the first to challenge union fees. Last year, in Harris v. Quinn, the justices ruled 5-4, that Medicaid home health workers were not full public employees and therefore could not be compelled to pay collective bargaining union fees – a narrow decision but one that many Supreme Court watchers said was a sign the court seemed poised to overturn the longstanding precedent set by Abood.

As a result, the Friedrichs case was slated to deal the most serious blow yet to unions, overturning more than four decades of legal precedent and effectively converting every state into a right-to-work jurisdiction overnight.