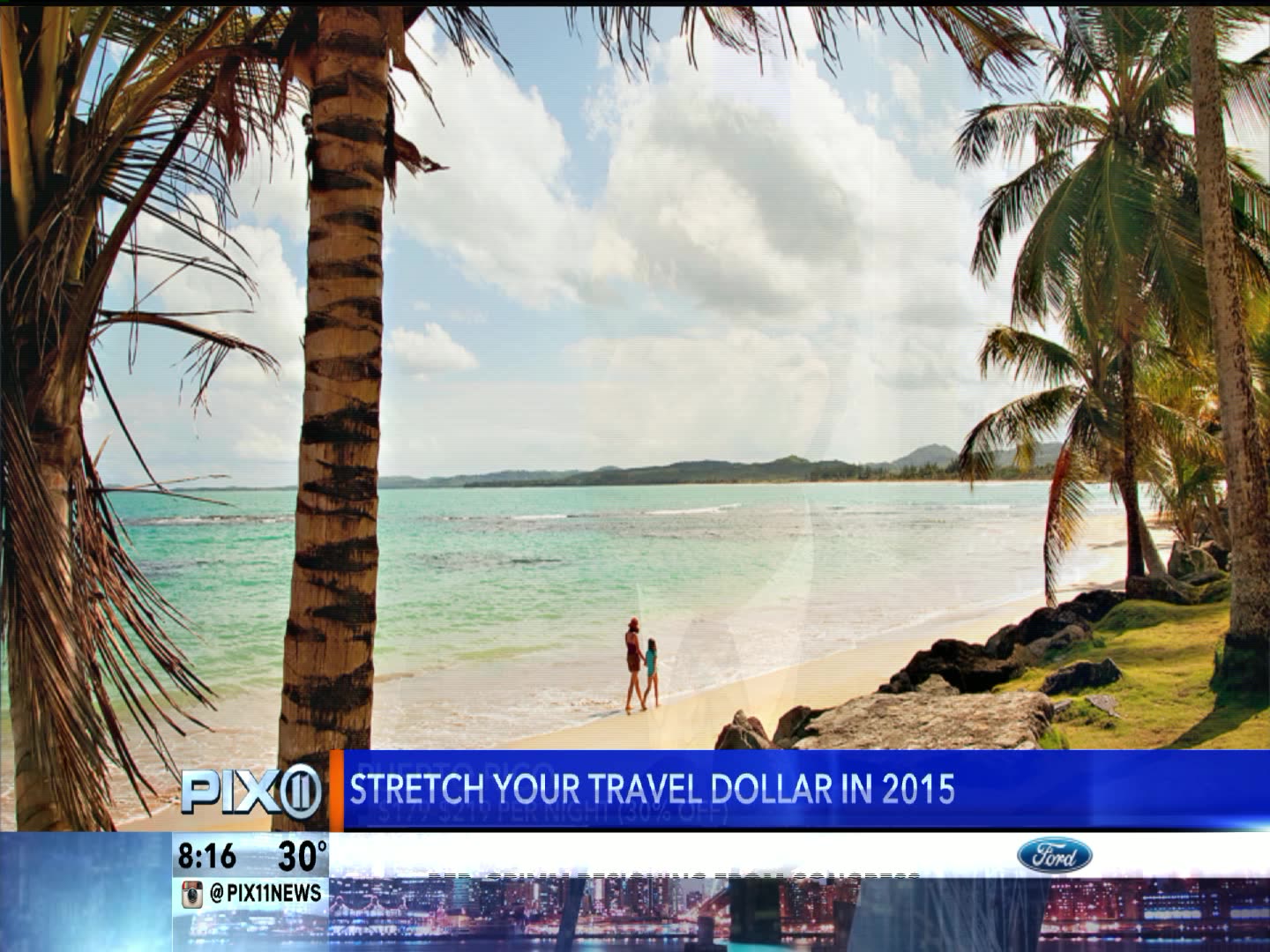 Travel isn't cheap, but when the dollar is 15%–55% stronger against other currencies than it has been in over a decade, now is the time to travel! Not everywhere is a good value at this time. Some other currencies are flourishing just like the USD, so if you want to find strong-dollar discounts, you have to know where to look. Here are five amazing places to visit that are far less expensive than they have been in a recent five-year history thanks to a strong U.S. dollar.

Note: All currency conversions are based on XE.com's historical data. The current exchange rates may have changed since this article was published. Daily budgets and average hotel costs were calculated using numbeo.com's travel index tool.

Check out the 5 places to travel while the dollar is still strong below:

Five years ago, you would have only gotten 6.73 Rand for your dollar, but now you'll feel more than twice as rich in South Africa. There has never been a better time to go on an African safari. In 2010, entrance to South Africa's biggest park (Kruger National Park) would have cost $23.77 (160 ZAR), but now, you can watch lions, zebras and elephants roam free for just $17.50 (264 ZAR)!

The beautiful city of Moscow, the churches of St.Petersburg, and the world's greatest train journey have never been so affordable. The Russian ruble fell drastically at the end of 2014, and while this isn't great for Russians, it is excellent for those of us who have always wanted to visit this vast and beautiful country.

One of the most legendary train journeys on the planet, the Trans-Siberian, is now a better value than it has been in the past few decades. The trip from Moscow to Ulan Bator will run you around 35,000 Rubles for a first class ticket. At Christmas time in 2010, that would have been $1,160, but with today's exchange it's just $498! You can buy two tickets today, for the same price as one ticket would have cost you at the end of 2014. Incredible.

Although Brazil was once considered a "BRIC" economy, the collapse of oil prices, the FIFA World Cup, and preparation for the 2016 Olympics has proven pretty rough on Brazil's currency. Today the Brazilian real is suffering a real downturn and the U.S. dollar is getting about 57% more than it did around this time in 2010.

If the Brazilian real continues on this downward trend, the Olympics in 2016 might make for a great budget destination. According toolympics.org, tickets for events will go for around 70 real. That's only $17.70, and by the time the games begin, it might be even less.

I have personally always wanted to visit Japan, but I thought it would be outrageously expensive. This was true back in 2010 when the exchange rate was around 82¥ to the dollar. At that time, Japan would have been a steep holiday, but today the dollar gets 33% more than it did back then.

Head to Europe for huge savings! Explore the whitewashed buildings of Oia, Greece, lay on the soft, sandy beaches of the Mediterranean, explore the beauty of Paris, and the history of Rome, all for a fraction of what it would have cost you just a few years ago.

At the end of 2010, the Euro was at 0.76 to the dollar, but today the dollar is 17% stronger and trades almost equally with the Euro. When I was in Greece, I found a lovely apartment just a few blocks from the sea on Santorini island. At the time (May, 2011), that apartment cost me 34 Euros, which was around $50 USD/night. Today I could get that same apartment for just over $37.

There hasn't been a cheaper time for Americans to visit Europe in over a decade. This is the perfect time to explore one of the most fascinating continents on Earth.

Enjoy it while it lasts...

Celebrate the strong American dollar by taking a trip to a place you couldn't afford previously. Enjoy the discounts while you can!

RELATED: The best places to travel based on your zodiac sign

Who: Pisces (February 20–March 20) are naturally artistic and intuitive. They love the idea of escaping reality and exploring the globe. Pisces crave alone time to reflect and stay in touch with their emotions.

Where: Marrakech, Morocco, is calling! You'll feel as if you've stepped into another world when you wander the winding alleyways filled with merchants selling fragrant spices, fresh olives, and hand-painted ceramic wares. Be sure to visit Majorelle Garden, a 12-acre botanical garden in the heart of the city, owned by famed fashion designer Yves Saint Laurent, for a quiet moment of solitude.

Who: Aries (March 21–April 20) are known for being courageous, energetic, and impulsive. They love physical challenges and spending their time outdoors.

Where: California's Yosemite National Park is a nature lover's playground. Hire a car and drive through Mammoth Lakes to see the spectacular park entrance. Be sure to stay for more than a weekend to explore the trails and spot wildlife like black beers and woodpeckers. If you're a seasoned hiker, apply for a permit in advance to do the iconic Half Dome day hike.

Who: Taurus (April 21–May 21) are true romantics at heart. On weekends, they love to unwind by cooking, gardening, and spending time with loved ones.

Where: Granada beckons. The Spanish city is a cultural hub that boasts delectable tapas dishes and streets pulsing with music and the rhythm of local flamenco dancers. Add the Alhambra Palace to your must-see list; the stunning fortress has lacy Islamic archways and a gorgeous manicured garden that sprawls for miles.

Who: Geminis (May 22–June 21) love company. They're a social bunch who are curious and talkative. They're also quick learners and love to explore new places, especially if they're only a short flight away.

Where: With its soft sand beaches and azure waves, Tulum, Mexico, is always a good idea and a perfect destination to see with friends. Indulge your curious side by exploring the Mayan ruins in Tulum National Park.

Who: Cancers (June 22–July 22) are artistic and highly imaginative. Close friendships are important to them, and they love catching up over a good meal.

Where: Lisbon, Portugal, is your ideal next destination. Art aficionados will love the vibrant street art scene, while foodies can flock to Time Out Mercado da Ribeira, a gourmet food hall where the country's most talented chefs serve up culinary delights. Don't miss the creamy Portuguese tarts—they're worth the long line.

Who: Leos (July 23–August 21) love to go on vacation. They're less inclined to travel far but are happy to splash out and indulge their love for the arts and their theatrical side.

Where: London and New York often top the list of amazing performance cities, but theater buffs should add Chicago to their flight-alert list. Take a look at the Broadway shows playing at the Goodman and Chicago theaters, or visit Second City for a comedy scene, with alums like Tina Fey and Steve Carell.

Who: Virgos (August 22–September 23) rarely take a break, so choosing a relaxing vacation destination is paramount. They love nature, healthy food, and cleanliness.

Where: Consider Lauterbrunnen, Switzerland. The quaint town is quintessentially Swiss, with wood cabins, red Swiss flag bunting, and colorful window boxes. Jump on the funicular to Jungfrau, one of the most accessible mountains in the Bernese Alps. On a clear day, you can see as far as Germany and France.

Who: Libras (September 24–October 23) are intellectual, fair-minded, and diplomatic. They like to share experiences with others, appreciate natural beauty, and love to settle down with a good book.

Where: Australia's Harbor City combines sparkling world-class beaches with a bursting restaurant scene and plenty of natural attractions. Take your pick of picturesque beaches to throw down a towel and read a book—Tamarama, Balmoral, and Gordon's Bay are our picks. Venture out of town for a weekend trip to the Blue Mountains for awe-inspiring natural rock formations and dense bushland.

Who: Scorpios (October 24–November 22) are brave, passionate, and honest. They're natural-born leaders who rarely take a break.

Where: Take a moment to relax in Burano, Italy. The vibrant city is filled with waterfront buildings painted with rainbow hues and colored awnings. You'll get on with the passionate Italian people, and if you feel the urge to flex your mind, download an Italian language app and try to order your next pasta in the local tongue.

Who: Sagittarians (November 23–December 22) are curious and energetic. They're adventure seekers who crave freedom.

Where: Madagascar, an island off the coast of Africa, has a unique mix of attractions for those who look beyond busy capital cities for vacation. From the lush rainforests to the white beaches and colorful reeves, Madagascar houses thousands of animal species you won't find anywhere else in the world.

Who: Capricorns (December 23–January 20) are family oriented. They're practical and often serious, with a lot of discipline.

Where: Test your disciplined nature at Jasper National Park in the Canadian Rockies. Located in Alberta, the park has subalpine forests and an immense ice field, perfect for those determined to push their physical limits, or take the family on an outdoor escape.

Who: Aquarians (January 21–February 19) fight boredom at all costs. They seek out original adventures and love being independent.

Where: Abu Dhabi, the capital of the United Arab Emirates, is an island in the Persian Gulf. You'll never have to worry about boredom during a trip to Abu Dhabi, thanks to an itinerary packed with sailing, historic sights, shopping and desert safaris.

Marrakesh by Design by Maryam Montague
BUY IT
Lisbon Street Art by Photographs by Rob Wilkinson, $113.91
BUY IT
AIA Guide to Chicago by American Institute of Architects Chicago, $22.51
BUY IT
The Alhambra by Robert Irwin, $13.67
BUY IT
Madagascar by Xavier Van der Strappen, $169.13
BUY IT
Yosemite by Kate Nearpass Ogden, $19.35
BUY IT
Up Next

Are you planning international travel while the dollar is so strong?

More from WiseBread
5 Best Travel Reward Credit Cards
How to Save an Extra $1,094.86 a Year
40 Most Useful Travel Websites That Can Save You a Fortune