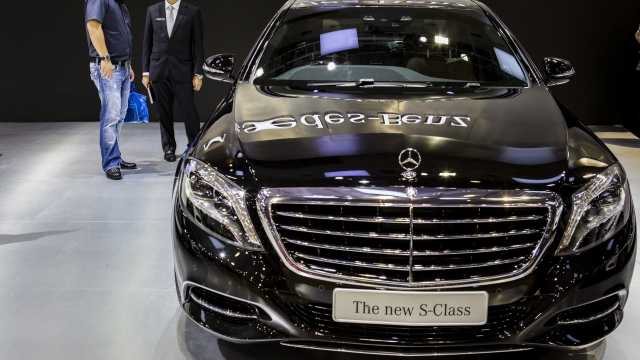 Reports that the ride-hailing startup is looking to invest in autonomous vehicles could say something about the future of the entire auto industry.

Reports this week that Uber is shopping around for a fleet of self-driving cars shows the ever-expanding startup is willing to look for unconventional solutions to challenges it faces in not just becoming profitable, but remaining feasible.

Autonomous vehicles aren't going to replace human drivers in the next few years and may not even gain serious traction in the next decade, but it's a technology that's becoming increasingly difficult to write off as a futuristic fantasy.

More From Inc.com: Inside the World's Most Dog-Friendly Office

Some Tesla vehicles already have impressive autonomous abilities that allow them to essentially drive themselves on many highways; Google continues to test its own robot cars on the streets of Mountain View, California, and other legacy automotive names like BMW are working on their own autonomous driving projects.

Autonomous vehicles could also go a long way to fixing the one part of the system that gives Uber the most headaches -- its drivers.

Drivers are Uber's biggest expense and arguably its biggest liability as well. Issues over insurance, collective bargaining and potential safety concerns are just a few items on what's certainly a long list of reasons Uber would probably prefer to have software driving its passengers around.

More From Inc.com: 10 TED Talks to Make You a Better You

It seems safe to assume that notions like these could be fueling Uber's reported interest in buying autonomous or semi-autonomous vehicles, as reported by Reuters.

But getting in early on what could be the next automotive revolution might be about more than just reducing costs and headaches for Uber. It could be a long-term survival tactic, or at least it should be.

That's because many automotive leaders are beginning to shift how they look at their industry, with clear echoes of the shift seen in the software industry over the past few decades. In the 1990s, titans like IBM and Microsoft began to see more opportunities in selling services rather than just products.

More From Inc.com: 10 Simple Ways to Motivate Yourself Every Day

Read between the lines of the jargon there and it tells you that automakers are looking at the billions of dollars in gross revenues Uber is pulling in and smelling a huge opportunity.

If BMW were able to bring a luxury self-driving car to market, it could not only sell a whole fleet to Uber, it could replace Uber. Imagine putting the brand heft of a name like BMW behind a ride-hailing service with certified drivers and vehicles guaranteeing comfort and the quality of the experience.

Of course, the main challenge to entering that market is the fact that it's currently dominated by Uber. And if Uber wants it to stay that way they'll figure out the bold new world of self-driving cars before it swallows Uber whole.

RELATED: See how much Uber drivers make in different cities

More from Inc.com:
3 Powerful Lessons From an Expert on Conflict Resolution
Mark Cuban's Advice for Startups: 'Do Everything Possible Not to Raise Funds'
25 Excellent Pieces of Advice That Most People Ignore