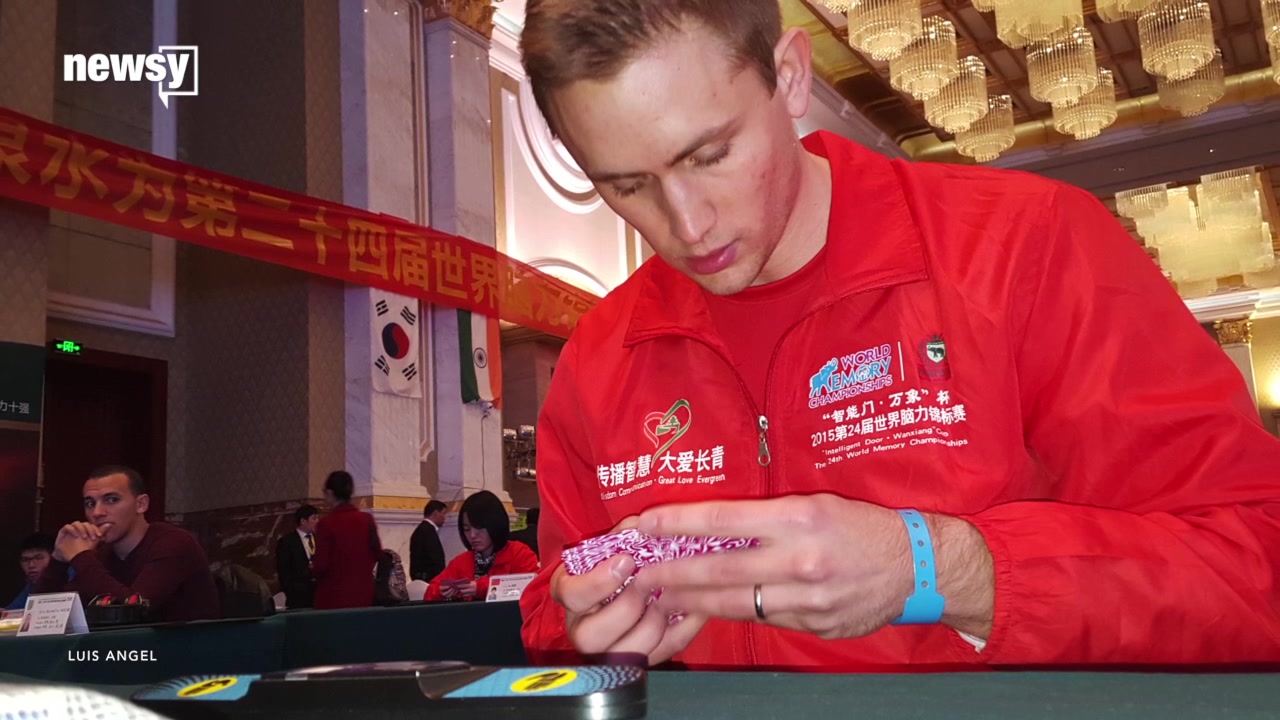 Looking back on December's three-day World Memory Championships in Chengdu, China, Mullen still figures he was one of the "dark horses."

But going into the final round of the competition, the 24-year-old medical student learned he was in second place — just 300 points behind the first-place contestant, Sweden's Marwin Wallonius. The top prize could be Mullen's. All he had to do was memorize the order of an entire deck of cards in 23 seconds or less.

Mullen became the first American to win the World Memory Championships, according to the competition's website. He also holds the Guinness World Record for most numerical digits memorized in an hour: 3,029.

RELATED: Memory loss -- what to look for

Here's something you might not expect: Mullen claims there's nothing superhuman about his brain — that growing up, he'd always had an "average" memory. Becoming a world-class memory athlete only took a few years of practice — and the creation of around 100 "memory palaces." But more on those later.

"I don't have an exceptional memory," Mullen told Mic. "It's a surprise to most people."

SEE ALSO: Relative of inmate who attacked Fogle warns 'he would do it again'

Mullen began researching memory techniques as a junior in college, hoping they could help with his schoolwork. "I felt frustrated; I was always cramming for tests and forgetting everything instantly," he said.

He started by reading a Bill Gates favorite: Joshua Foer's Moonwalking With Einstein: The Art and Science of Remembering Everything.

"I was hooked from the beginning," Mullen said. "I couldn't believe I'd never heard about this stuff."

Top memory athletes tend to share the same techniques — techniques we commoners can allegedly learn too. Mullen shared with Mic some of the strategies that helped earn him his top spot.

Humans aren't good at remembering abstract things like numbers and cards — but we do have excellent visual and spatial memories.

More from Mic: Super Tuesday's Most Bizarre Moment of Is This Exchange About the KKK on CNN

So when tasked with memorizing, say, a slew of numerical digits, "we have to convert those abstract things into something more memorable — something we can visualize as a mental image," Mullen said. "Imagine some sort of physical space in the mind's eye, and place those mental images into those physical spaces."

The physical spaces should be real locations you know well, such as your workplace, elementary school or childhood home. In the competitive memory community, they're better known as "memory palaces."

Here's how memory palaces work.When it comes to memorizing strings of numbers, Mullen mentally associates every digit from 0 to 9 with a different phonetic sound. For example, 3 is an "m" sound, 7 is a hard "c" and 5 is an "l."

For every series of three digits, Mullen merges the digits' accompanying sounds to create a mental image. The digits 3, 7, 5 sound like "Michael" — so he imagines former basketball player Michael Jordan. Mullen has a pre-determined mental image for every three-digit combination from 000 to 999. The digits 0, 7, 5 make "s," "c" and "l" sounds, so Mullen imagines an icicle.

Next, he places those mental images along a trail of distinct "loci" through one of his memory palaces. If Mullen were using his childhood home, for instance, he'd place images alongside his mailbox, his driveway, his front door, etc. He assigns two images — each representing three individual digits — to each locus.

That visualization would represent "375075."

Memorizing 60 digits would be as easy (if you can call this easy) as placing 20 images across a series of 10 loci in your mental palace.

Memorizing a deck of cards works the same way. For every possible two-card combination, Mullen has a corresponding mental image.

More from Mic: Cory Booker Wants to Make America Great — But Will His Vision Work?

As he scans a deck, Mullen mentally converts each consecutive two-card pair into its corresponding image, and places that image into his memory palace.

"Memorizing a deck of cards is as simple as translating 26 different card pairs into 26 images," he said.

Mullen isn't just trying to show off. His memory techniques are useful, he said, for memorizing med school material. He'll devote different rooms within a memory palace to different classes of drugs. Information on a drug's toxicity will go on one locus within the room. Information on the drug's negative side effects go on another.

"It offers you organization," he said.

Mullen's mission is to share his memory techniques with others; currently, he offers a series of video tutorials on his website, Mullen Memory. He plans to take next year off medical school to work on his memory-related pursuits full-time.

In the meantime, Mullen's making sure he can live up to his prestigious new international title.

"Since winning," Mullen said, "it's kind of become this fear that if I ever forget somebody's name, I'm going to be ridiculed."