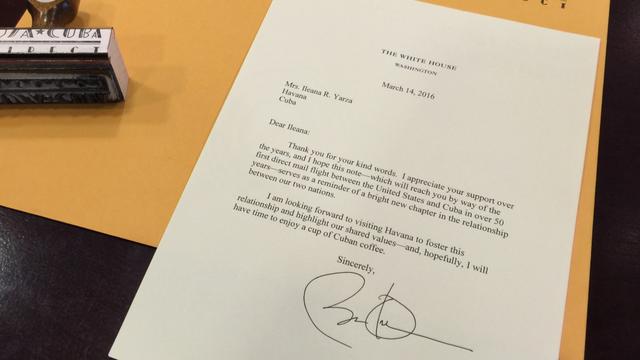 It's been 50 years since the U.S. stopped offering direct mail service to Cuba, but on Wednesday that changed.

Not only did a plane carrying a postal load take off for the island nation, among the letters was one President Obama penned to a woman who had written him not long ago.

In it, she tells the president how much she's looking forward to his March visit to Havana and invites him to stop by her Vedado place for a cup of Cuban coffee.


Obama responded that he, too, is looking forward to the trip and, time permitting, he'll enjoy a cup of the country's namesake beverage.

The president is expected to plant his feet on Cuban soil on March 20, making him the first U.S. national leader to do so in about 90 years.

More on AOL.com:
'The Big Bang Theory' casts Judd Hirsch as Leonard's dad -- but when will we meet Penny's mom?!
Did Joe Biden argue against the president's SCOTUS nomination in 1992?
Shocking Facebook photo gets police officer in serious trouble