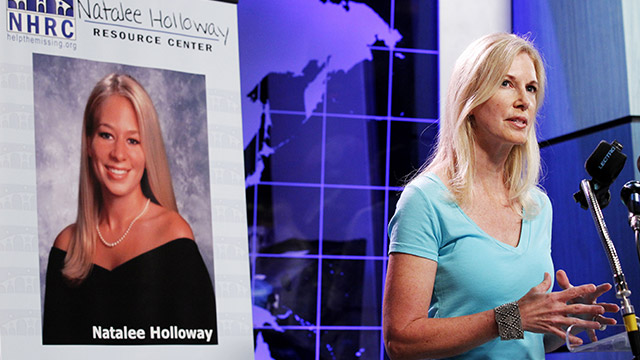 Joran van der Sloot appears to have confessed to the 2005 murder of Natalee Holloway.

"I always lied to the police. I never told the truth," Van der Sloot said in a video posted by RadarOnline. "Also, when I was young­er, I never told everything. The police just never knew what they had to ask me."

The person recording the video then asks if he is referring to the Holloway case, to which he replies, "Yes, this is also where I am guilty and I accept everything that I have done."

Joran van der Sloot appears to confess to Natalee Holloway murder
Dutch national Joran Van der Sloot arrives for a hearing at the Lurigancho prison in Lima on January 13, 2012. Van der Sloot, who pleaded guilty earlier this week to the murder of a young Peruvian woman in 2010, will hear the sentence today. Van der Sloot is also a prime suspect in the unsolved disappearance of US college student Natalee Holloway on the Caribbean island of Aruba in 2005. AFP PHOTO/STR (Photo credit should read STR/AFP/Getty Images)
File picture dated January 6, 2012 of Dutch national Joran Van der Sloot during his preliminary hearing in court in the Lurigancho prison in Lima. The Peruvian Supreme Court has approved the extradition of Joran van der Sloot to the U.S. on charges of extorting money from the family of missing Alabama teen Natalee Holloway but it will not take place until he serves out his 28-year sentence for the 2010 murder of 21-year-old Stephany Flores. AFP PHOTO/ Ernesto Benavides (Photo credit should read ERNESTO BENAVIDES/AFP/GettyImages)
Up Next

In 2005, the 18-year-old Holloway was visiting Aruba as part of a high school trip. She failed to make her flight home, at which time it was discovered she was missing.

She was last seen in the company of Van der Sloot and two other locals. They claimed that they did not know what happened to her, but were nevertheless arrested several times in connection with the case. Due to lack of evidence, no one was formally charged with Holloway's death.

In 2010, Van der Sloot contacted legal representatives for Holloway's mother and claimed he would provide information regarding the location of her body in exchange for money. He was indicted on federal wire fraud and extortion charges and the information he provided proved to be false.