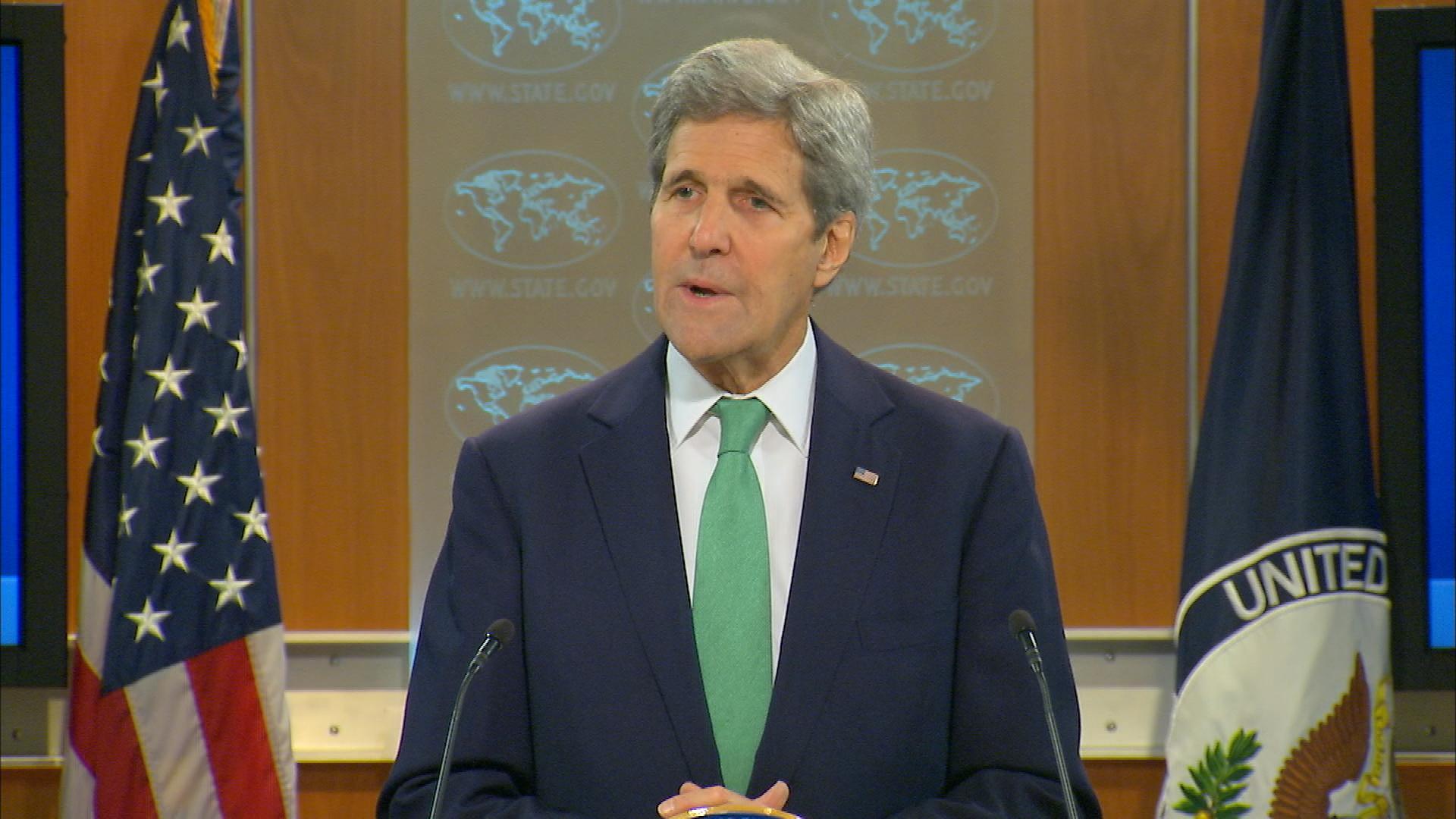 WASHINGTON (Reuters) -- The Islamic State militant group has committed genocide against minority Christians and Yazidis as well as Shi'ite Muslims, U.S. Secretary of State John Kerry said on Thursday, a finding that is unlikely to greatly change U.S. policy toward the group.

READ MORE: 2 women risked their lives to capture this chilling footage of life inside the capital of ISIS

"Naming these crimes is important, but what is essential is to stop them." John Kerry, U.S. Secretary of State

RELATED: Life under the rule of ISIS

25 PHOTOS
What life looks like under ISIS rule
See Gallery

On Wednesday, a State Department spokesman Mark Toner said: "Acknowledging that genocide or crimes against humanity have taken place in another country would not necessarily result in any particular legal obligation for the United States."

Islamic State militants have swept through Iraq and Syria in recent years, seizing control of large swathes of territory with an eye toward establishing jihadism in the heart of the Arab world.

The group's videos depict the violent deaths of people who stand in its way. Opponents have been beheaded, shot dead, blown up with fuses attached to their necks and drowned in cages lowered into swimming pools, with underwater cameras capturing their agony.

U.S. President Barack Obama has ordered air strikes against the group but has not made any large commitment of U.S. troops on the ground.

"It may strengthen our hand getting other countries to help. It may free us against some (legal) constraints, but the reality is that when you are fighting somebody, you don't need another reason to fight them," said Jon Alterman, director of the Middle East program at the Center for Strategic and International Studies, a think tank.

RELATED: The fight against ISIS

Kerry argued that the United States has done much to fight the group since the start of air strikes in 2014, but did not directly answer a question on why the Obama administration had not done more to prevent genocide.

Historians have asked the same question about Darfur and Rwanda, both places where the United States also concluded that genocide had taken place.

Islamic State militants have exploited the five-year civil war in Syria to seize areas in that country and in neighboring Iraq, though U.S. officials say their air strikes have markedly reduced the amount of territory the group controls in both.

On-again, off-again peace talks got under way this week in Geneva in an effort to end the civil war, in which at least 250,000 people have died and millions have fled their homes. A fragile "cessation of hostilities" has reduced, but not ended, the violence over the last two weeks.

A screen grab from a video posted to YouTube by ISIS that claims to show journalist James Foley, who was abducted in 2012 while covering the Syria civil war, being beheaded.

GlobalPost Journalist James Foley talks about being held by the Libyan Government. Foley was later abducted in Syria and a video by Islamic State militants was released in 2014 that purported to show his killing by the militant group.

Execution of Steven Sotloff by Jihadi John of ISIS. In August 2013, Sotloff was kidnapped in Aleppo, Syria, and held captive by militants from the Islamic State of Iraq and the Levant. Jihadi John (Mohammed Emwazi, born August 1988) a British man who is thought to be the person seen in several videos produced by the Islamic extremist group ISIL showing the beheadings of a number of captives in 2014 and 2015.

A masked, black-clad militant, who has been identified by the Washington Post newspaper as a Briton named Mohammed Emwazi, stands next to a man purported to be David Haines in this still image from a video obtained from SITE Intel Group website February 26, 2015. The "Jihadi John" killer who has featured in several Islamic State beheading videos is Emwazi, a Briton from a middle class family who grew up in London and graduated from college with a degree in computer programming, the Washington Post newspaper said. In videos released by Islamic State (IS), the masked, black-clad militant brandishing a knife and speaking with an English accent appears to have carried out the beheadings of hostages including Americans and Britons. The Washington Post said Emwazi, who used the videos to threaten the West and taunt leaders such as President Barack Obama and British Prime Minister David Cameron, was believed to have travelled to Syria around 2012 and to have later joined IS. British government sources and the police refused to confirm or deny the report, citing a live anti-terrorism investigation, a position mirrored by a spokeswoman for Cameron.

A man makes the victory sign behind a picture of Herve Gourdel, the hiker beheaded by Algerian militants linked to the Islamic State group during a demonstration in support of Kurdish forces fighting against the Islamic State (IS) in Syria on October 2, 2014 in Marseille, southern France.

Screen shot from an Internet video released Friday that purports to show an ISIS militant beheading British aid worker Alan Henning, who had been taken hostage by the extremist group.

The order of service for the memorial service for murdered British aid worker Alan Henning at Eccles Parish Church on November 22, 2014 in Manchester, United Kingdom. The 47-year-old taxi driver was captured in December while delivering food and supplies to Syrian refugees and was murdered by Islamic State (IS) militants in Syria.

Yellow ribbons for murdered British hostage Alan Henning, are attached to trees in the town centre of Eccles, north west England on October 4, 2014. Britain reacted with horror on Saturday to the beheading of hostage Alan Henning, who many had dared to hope might be spared after a cross-community appeal for his release. Prime Minister David Cameron led tributes to the 47-year-old taxi driver who went to the region as a volunteer to deliver aid and whose death was announced by Islamic State jihadists in a video released late Friday.

A man walks past screens displaying a television news programme showing an image of Kenji Goto, one of two Japanese citizens taken captive by Islamic State militants, on a street in Tokyo January 25, 2015. Japanese Prime Minister Shinzo Abe on Sunday called the apparent killing of Japanese captive Haruna Yukawa by Islamic State militants "outrageous and impermissible," and again called for the group to release Goto, the second Japanese national they are holding. The words on the screen read "Japanese hostage incident" (top L) and "a still image posted on YouTube" (top R).

Jordanian youth gather for a candle light vigil to condemn the killing of the two Japanese hostages, Haruna Yukawa and Kenji Goto, by the Islamic State (ISIS) group, in a gesture showing solidairity with Japanese people, in front of the Japanese embassy on February 2, 2015 in Amman, Jordan.

Men in orange jumpsuits purported to be Egyptian Christians held captive by the Islamic State (IS) kneel in front of armed men along a beach said to be near Tripoli, in this still image from an undated video made available on social media on February 15, 2015. Islamic State released the video on Sunday purporting to show the beheading of 21 Egyptian Christians kidnapped in Libya. In the video, militants in black marched the captives to a beach that the group said was near Tripoli. They were forced down onto their knees, then beheaded. Egypt's state news agency MENA quoted the spokesman for the Coptic Church as confirming that 21 Egyptian Christians believed to be held by Islamic State were dead.

A woman cries as she prays for Tomislav Salopek in a local church in Vrpolje village, Croatia, August 12, 2015. An Egyptian group allied to Islamic State has published a photograph it says showed the beheaded body of a Croatian hostage it threatened to kill last week, the SITE monitoring service said on Wednesday. Reuters could not independently verify the authenticity of the picture, which carried a caption that said: "killing of the Croatian hostage, due to his country's participation in the war against Islamic State, after the deadline expired." Last week, an online video purportedly from Sinai Province showed a man who identified himself as Tomislav Salopek and said the group would kill him in 48 hours unless Muslim women in Egyptian jails were freed.

U.S. lawmakers urged Kerry last year to make a determination on whether atrocities committed by the militant group against Christians and other religious groups amounted to genocide.

The State Department earlier had predicted it would miss a deadline set for Thursday on this decision.

Republicans, who control the U.S. Congress, have been pressuring the Democratic Obama administration to call the militants' atrocities in Iraq and Syria acts of genocide. This week, one chamber, House of Representatives, passed a resolution labeling the group's violence against religious and ethnic minorities as genocide, war crimes and crimes against humanity.

A U.S. administration has not made a genocide finding since 2004, when it determined genocide had occurred in Darfur and that the government of Sudan was responsible.

Asked if the genocide finding was likely to accentuate a view held by some that the West is engaged in a battle with Islam, a senior U.S. official noted that Kerry's determination included Shi-ite Muslims as well as Christians and Yazidis.

"A very large Muslim group is included in this," said the official, who spoke on condition of anonymity. "The secretary isn't just singling out one group that has political support in the United States," he added, referring to Christians.