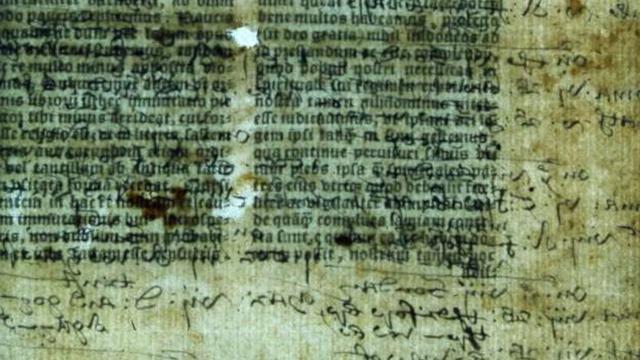 Hidden writing found in England's first printed Bible published in 1535 is proving to be quite valuable in providing a more complete picture of the English Reformation.

The book itself is kept at the Lambeth Palace Library in London, and until recently was considered to be a rather clean copy.

Not long ago, historian Dr. Eyal Poleg from Queen Mary University of London noticed parts of the Bible had plain paper pasted onto them, as if to conceal something below.

3D X-ray imaging revealed that the Latin Bible had been annotated with excerpts from Thomas Cromwell's English language 'Great Bible.'

Said Poleg, "... it was widely assumed that the Reformation caused a complete break, a Rubicon moment when people stopped being Catholics and accepted Protestantism, rejected saints, and replaced Latin with English. This Bible is a unique witness to a time when the conservative Latin and the reformist English were used together, showing that the Reformation was a slow, complex, and gradual process."

Related: 11 of the most beautiful libraries in the world: