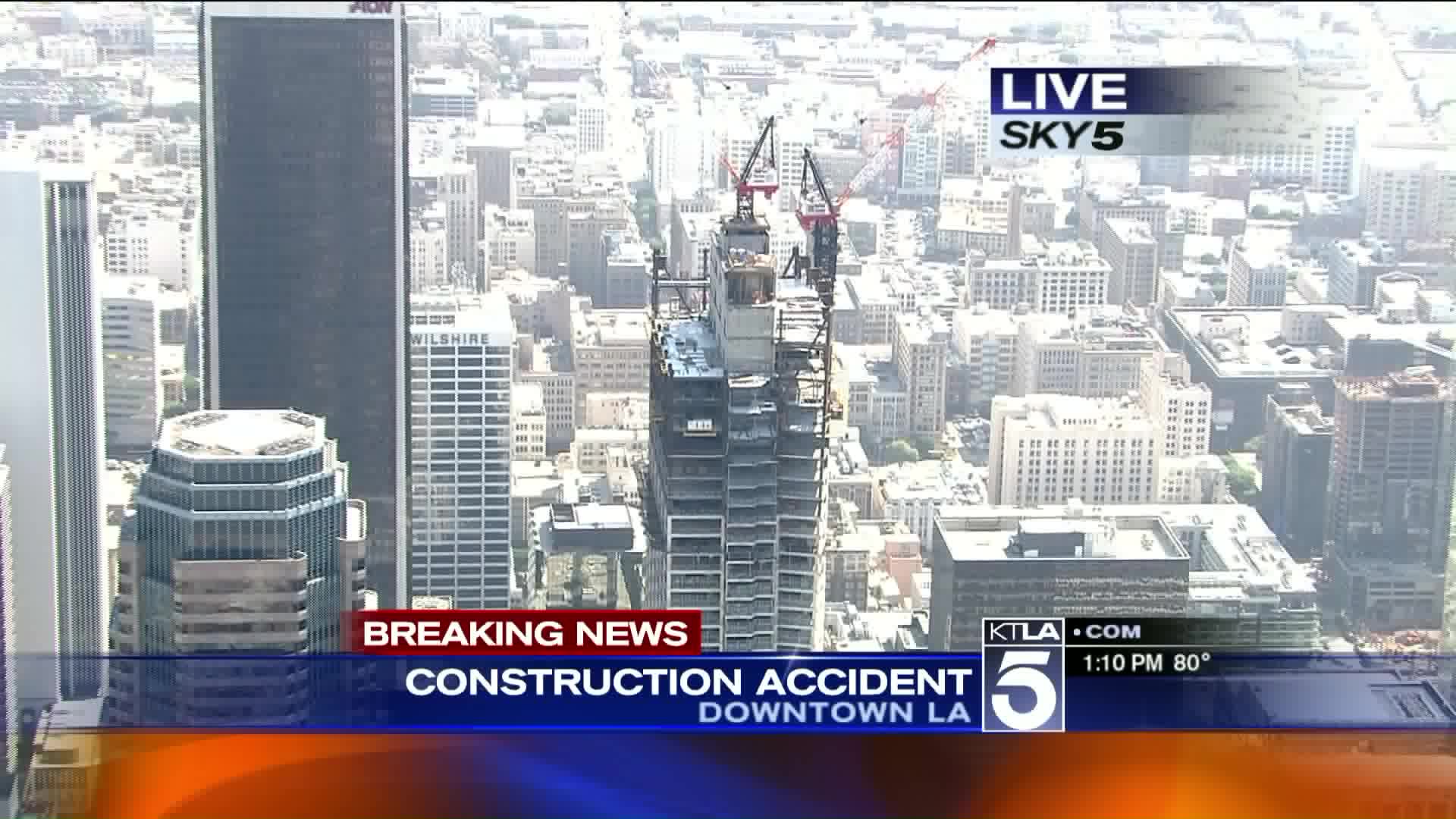 LOS ANGELES (KTLA) -- A construction worker on his second day on the job died after falling from the 53rd floor of the Wilshire Grand Center tower and landing on a passing car in downtown L.A. early Thursday afternoon.

The worker fell from the under-construction building, located in the 600 block of South Figueroa Street, around 12:30 p.m., an LAFD alert stated.

It was the worker's second day on the job as an electrician, the owner of the construction management company said.

His body landed on a car that was traveling on Wilshire Boulevard, just west of heavily traveled Figueroa Street, according to fire officials and aerial video from Sky5.

See photos from the scene:

The worker was pronounced dead at the scene. He was not immediately identified.

The female driver of the white hatchback, which appeared to have out-of-state plates, was being evaluated at the scene by LAFD personnel, and it was unknown whether she was injured. The worker's body had landed on the back end of the car.

A Los Angeles Times staff photographer was on assignment on the building's 71st floor when he heard a loud thump and saw the man's body below, the newspaper reported.

"It sounded like a bag of cement fell off the edge of the building," photographer Mel Melcon said.

A stretch of Wilshire Boulevard appeared to be closed off in both directions shortly after 1 p.m., aerial video showed. Traffic was also shut down on Seventh, Figueroa and Flower streets, according to the Times.

Officials from the county coroner's office and the California Division of Occupational Safety and Health, aka Cal/OSHA, were on scene.

Authorities have not determined what caused the man to fall from the 1,100-foot tall skyscraper, which had just "topped out" four days earlier at 73 stories.

"We were deeply saddened to learn that we have lost a member of the team building the Wilshire Grand Center. Our thoughts and prayers are with the worker's family." Turner Construction Company

The structure, when completed, will overtake the U.S. Bank Tower as the tallest building west of the Mississippi River.

Work on the building been going on for about three years, with 891 men and women employed on site, said Chris Martin, CEO of architecture firm AC Martin and Martin Project Management, both of which are involved in construction.

Martin spoke with reporters at the scene, saying that the worker was on his second day at the site. It was not clear why he would have been doing electrical work at the edge of the building, Martin said.

Work on the project stopped Thursday during the investigation into the death, Turner Construction Co. announced. Counselors were set to be made available for workers.

"We were deeply saddened to learn that we have lost a member of the team building the Wilshire Grand Center. Our thoughts and prayers are with the worker's family," Turner said in a statement. "The entire team working on this project is committed to the safety of all of our workers, and we will do everything we can to understand what happened here today and prevent it from happening again."

Turner is the general contractor on the project, while AC Martin is the architect, and Martin Project Management is the project manager, according to a spokesman for Turner.