Morgan Stewart dishes about her fan-favorite blog, 'Boobs and Loubs'

Morgan Stewart may be best known for her starring role on E!'s "Rich Kids of Beverly Hills," but the California-native is more than just a television personality. She's launching her own fitness fashion collaboration with Touché L.A. which will be on sale on at Revolve later this Spring into Summer (and if her Instagram images of the collection are any indication, it's going to be your new favorite athleisure line). And at the same time, Stewart also has a book in-the-works and somehow manages to keep up with her popular blog, "Boobs and Loubs." Just call her a modern-day Renaissance woman.

Anyone who has read "Boobs and Loubs" knows it's like reading a page straight out of Morgan's diary -- it's personal, insightful, and completely hysterical. So it is no surprise that her avid followers (including practically everyone in the AOL HQ) are obsessed with her daily posts.

So when we met Morgan at our NYC offices, we had to pick her brain on her blog's influences, her newest writing project, and more!

And if you want even more Morgan Stewart news, head over to AOL.com at 6 pm EST today for more! 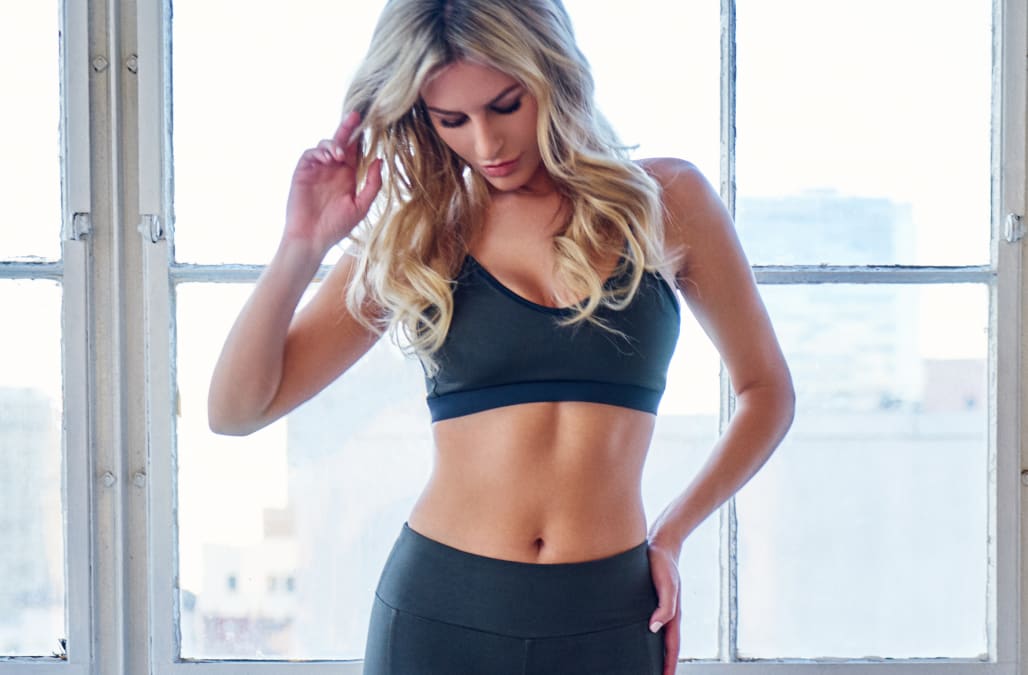 How did you first get the idea to start Boobs and Loubs?
Boobs and Loubs started in 2010 and someone actually wrote something really nasty about me online, and I thought "Alright, well I'll write about myself if you really want to talk about it." And I had the name in my mind for a really long time but I didn't know what it would be and then I thought, okay, let's just do it. And that when blogs were first starting to really be the thing -- everyone had a Tumblr at that point -- so I just thought to go for it

Did you every have a direction you wanted to take with it?
No, it's just my personality. Really it focuses on little vignettes, and sometimes I'm going to write about the protein shake I had, sometimes I'm going to write about boys that don't call back -- well that was when they weren't calling back and now I only speak to one boy -- really it's about anything I want it to be about, like friends, relationships, and other stories people have told me.

You have a quote on your blog that I really love. What made you come to that conclusion?
I just wrote that on a random Saturday and I feel like that represents me so much. When your in school in your formative years, your intelligence is based on what grades you get, and I was never smart in that way. I was always struggling in school, I liked to write but that doesn't mean that I knew what comma went where or what I was doing. Now, I'm looked at as someone who is intelligent and I never felt that way my whole life and as I've grown into myself, it's something I'm proud of. I'm obsessed and inspired by women who are fiercely intelligent because that's something that i never thought I was.

Would you tell your fans that the book will be an extension of your blog?
No question, but in a better way. I'm also going to be writing it from an older perspective and I'm reflecting back on something, it's not real-time, so I think it will be an interesting twist to my readers.

What was it like when you lived in New York?
I was a mess! Oh my god, I was a beast! I was so fat; I gained so much weight in six weeks. I went in August and by Thanksgiving I got off the plane and I was waddling off of it. For me, I think I'm a little bit behind for my age. When I was here, I didn't realize that I had to take care of myself and I didn't do such a great job doing it.

What piece of advice would have given your younger self?
Jesus, don't eat so much? But really, it would be relax. I would just say, relax, it's going to be fine.

YouShouldKnow is a feature that showcases up-and-coming social stars. To see more of past interviews, click here. And come back at 6 pm EST for more exclusive Morgan Stewart features, including an inside look at her upcoming wedding!

More YouShouldKnow:
Why alternative band X Ambassadors will soon be a household name
Brittany Wright reveals her most touching fan moments yet
Chantel Jeffries gives us her best celebrity impression