Sen. Ted Cruz of Texas had some words about Donald Trump's campaign rallies on Friday night.

Shortly after Trump canceled a scheduled rally in Chicago due to "security concerns" stemming from protests at the event, Cruz accused the Trump campaign of inciting the unrest.

"A campaign bears responsibility for creating an environment where the candidate urges supporters to engage in violence," Sen. Cruz said.

Cruz is referring to the multiple occasions in which Trump has suggested protesters should be "roughed up." In recent days, anti-Trump demonstrators have allegedly been assaulted at Trump events.

On a separate occasion last month, Trump spoke to his audience about another protester, saying "Knock the crap out of him, would you? Seriously, OK just knock the hell — I promise you I will pay for the legal fees. I promise, I promise." 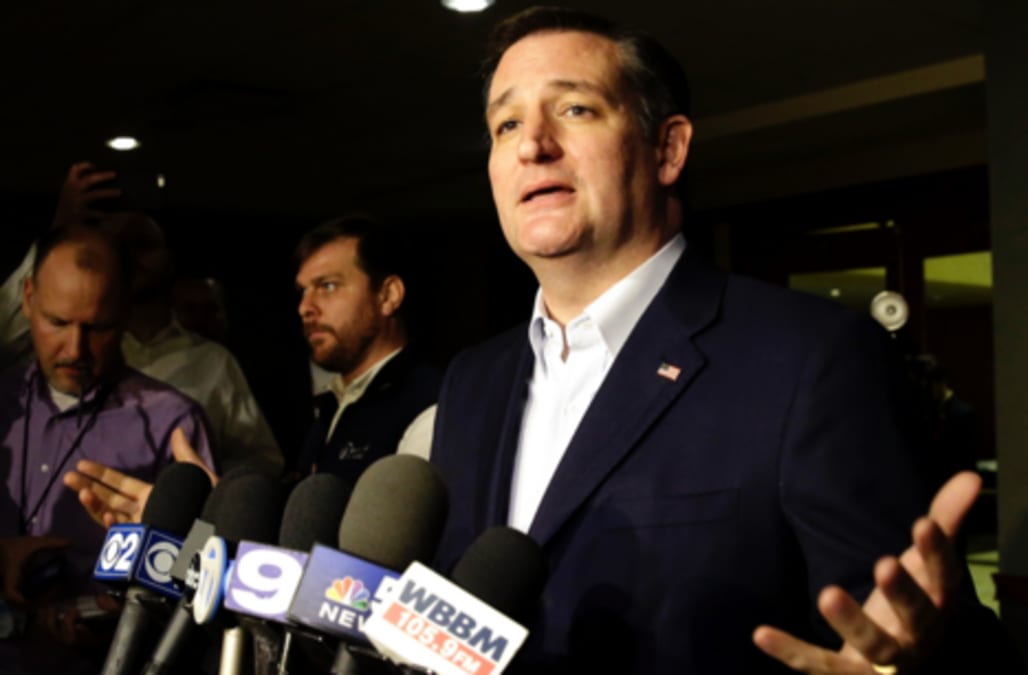 In his own remarks after the protests Friday night, Cruz said he wants to "appeal to civility in the democratic discourse."

"We can have genuine differences but can do so in a way that appeals to our better angels, not our worst," Cruz said.

Cruz also threw some of the blame at President Barack Obama, accusing Obama of using moments of crisis over the course of his presidency to "divide" the country.

Check out more from Ted Cruz's campaign in the gallery below.

9 PHOTOS
Ted Cruz through the years, with family
See Gallery

Ted Cruz: Trump's campaign 'affirmatively encourages violence'
UNITED STATES - MARCH 21: Ted Cruz (R) Texas (Photo By Douglas Graham/Roll Call)
U.S. Senate candidate Ted Cruz arrives for a luncheon near the state Republican convention, Friday, June 8, 2012, in Fort Worth, Texas. (Ron T. Ennis/Fort Worth Star-Telegram/MCT via Getty Images)
U.S. Senate candidate candidate Ted Cruz and his wife, Heidi, wave to delegates after he spoke on the final day of the state Republican convention at the FWCC on Saturday, June 9, 2012, in Fort Worth, Texas. (Ron T. Ennis/Fort Worth Star-Telegram/MCT via Getty Images)
U.S. Senator Ted Cruz, a Republican from Texas, speaks at the Heritage Foundation in Washington, D.C., U.S., on Wednesday, Oct. 30, 2013. Cruz was scheduled to speak on the scope of treaty power in the U.S. Constitution. Photographer: Pete Marovich/Bloomberg via Getty Images
LYNCHBURG, VA - MARCH 23: Senator Ted Cruz (R-Texas) stands on stage his his daughter, Catherine Cruz, 4, left, his wife, Heidi Cruz, and his older sister, Caroline Cruz, 6, right, after he made a speech announcing his candidacy for a presidential bid at Liberty University on Monday March 23, 2015 in Lynchburg, VA.(Photo by Matt McClain/ The Washington Post via Getty Images)
Republican 2016 U.S. presidential candidate and U.S. Senator Ted Cruz sits on the edge of the stage with his young daughter Catherine during a commercial break at the first official Republican presidential candidates debate of the 2016 U.S. presidential campaign in Cleveland, Ohio, August 6, 2015. REUTERS/Brian Snyder
Republican presidential candidate Senator Ted Cruz (R-TX ) and his family acknowledge the crowd at Faith Baptist Bible College in Ankeny, Iowa, January 23, 2016. REUTERS/Aaron P. Bernstein TPX IMAGES OF THE DAY
U.S. Republican presidential candidate Ted Cruz (R-TX) appears with his daughters Caroline and Catherine at a campaign event at Zaharakos Ice Cream Shop in Columbus, Indiana, U.S., April 25, 2016. REUTERS/Aaron P. Bernstein TPX IMAGES OF THE DAY
Senator Ted Cruz, a Republican from Texas and former 2016 presidential candidate, takes the stage with his family during the 2016 Texas Republican Convention in Dallas, Texas, U.S., on Saturday, May 14, 2016. Paul Ryan made clear Thursday that he is sticking with his extraordinary gambit that he isn't ready to support the Republican nominee for president unless Donald Trump can demonstrate that he's Republican enough. Photographer: Laura Buckman/Bloomberg via Getty Images
Up Next