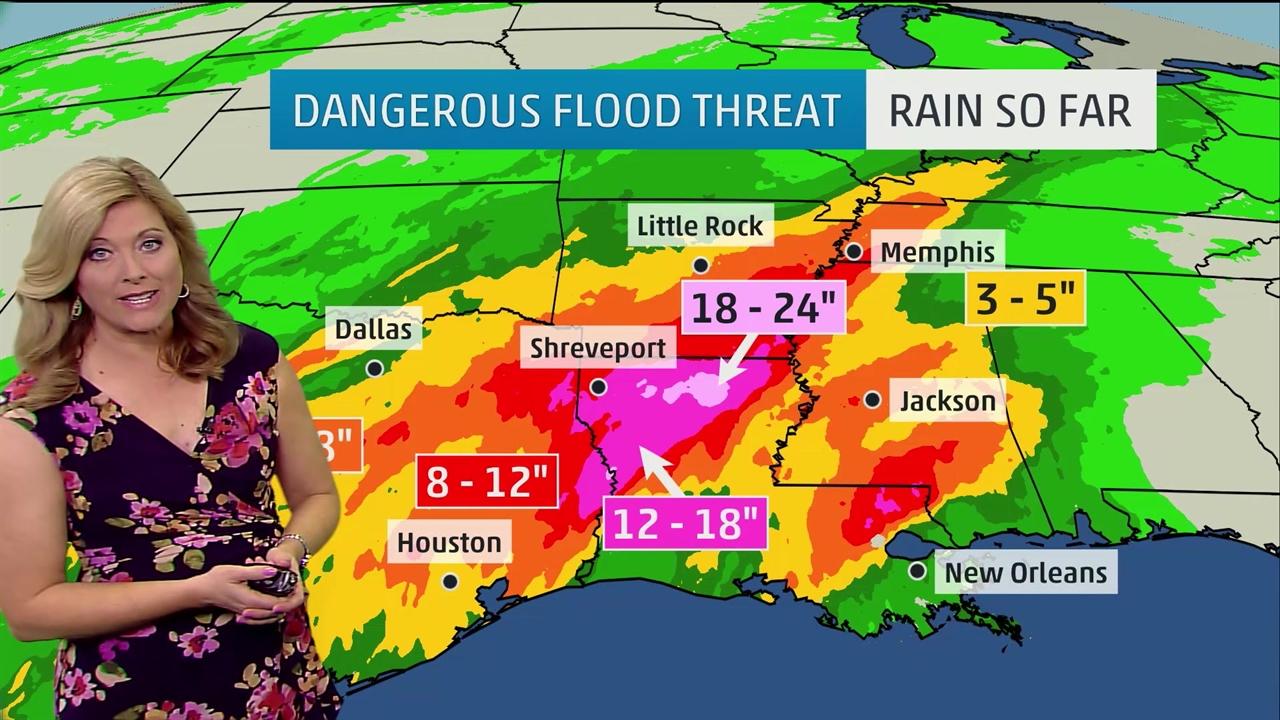 A frantic search and rescue mission took place Friday morning in Seminary, Mississippi, when a rescue boat overturned in the flooding and sent five people into the water.

The volunteers from Covington County were attempting to reach a cabin with people stranded inside when their boat flipped, according to WDAM-TV. Crews were immediately dispatched to look for those who fell into the water, and all were removed safely a short time later, the report added. It was not known if the volunteers were able to reach the cabin before the boat capsized. Seminary is located about 20 miles northwest of Hattiesburg.

All over the region, rivers quickly rose near record flood stages and homes were submerged in what the National Weather Service in Shreveport, Louisiana, is calling a historic flash flooding event. The rainfall is expected to persist in many areas on Friday. More than 22 inches of rain have fallen in the hardest-hit places.

"Typically, it will come up and drain off," Bossier City, Louisiana, resident Michael Konnovich, Jr. told the Associated Press. "But not this time. The water is just over my 5-foot chain link fence. I just don't know where this water is coming from."

The system's life-threatening impacts continued Friday, when at least 200 residents in Hammond, Louisiana, had to be removed from flooded areas. The impacts are expected to be felt for days as rivers continue their rise, even after the rainfall subsides. Five people have been confirmed dead from this storm system.

Here's how each state has been affected.

Gov. John Bel Edwards declared a state of emergency for the entire state and sent the National Guard to help with water rescues. The heavy rainfall shifted slightly east on Friday morning, inundating the town of Hammond and forcing residents to flee.

As many as 200 people had to be rescued from the floodwaters early Friday morning, according to local reports. More than 30 roads in Tangipahoa Parish were closed by flooding, WWL-TV said.

Tangipahoa Parish Sheriff Daniel Edwards said Friday that close to 50 roads were shut down due to floodwaters, report the Associated Press. According to Edwards, there have been 300 to 400 evacuees in his parish alone, many in neighborhoods that have never had trouble with flooding before.

According to a separate WWL-TV report, residents in Washington Parish were stranded on the roofs of their homes as floodwaters continued to rise Friday morning, and a Coast Guard helicopter was being sent to rescue them. In Bogalusa, a curfew was in place until at least 5 p.m. Friday in an attempt to keep people off the roads, the report added.

The Washington Parish Fairgrounds were also flooded Friday morning, and a local reporter said at least one structure collapsed into the floodwaters.

In Bienville Parish, a man drowned Wednesday afternoon while attempting to drive across a flooded highway before his vehicle was swept into the nearby Saline Creek, said Bienville Sheriff John Ballance. Driving with him was a female passenger who needed to be pulled to safety, as she was suffering from hypothermia. Her condition is unknown.

(MORE: The Lower 48 Just Had a Record-Breaking Winter)

Two more deaths were reported Wednesday in Ouachita Parish, the AP reported. One was a 22-year-old man who drowned after his car was swept off the road by floodwaters, and the other victim was a 6-year-old girl who died after her mother lost control of the car, the report added.

The Vernon Parish Sheriff's Office and personnel with the Fort Polk air evacuation unit used a helicopter and watercraft to evacuate residents that were stranded by floodwaters Thursday in the Hunter Town Road area in Burr Ferry, according to the sheriff's department.

A bridge on LA 557 in Ouachita Parish collapsed due to flooding Thursday, according to the DOTD. Crews will repair it as soon as possible.

A bridge collapsed on LA 557 in Ouachita Parish due to flooding. Crews will repair it as soon as possible. #LAwxpic.twitter.com/D25nuLJdkB

Authorities ordered mandatory evacuations of 3,500 homes near the Red Chute Bayou in Bossier City due to concerns that the waters could top its levees and ravage the densely populated area, according to KTBS.com.

Major flooding brought Interstate 20 to a halt for several days. I-20 westbound was still closed Friday for 12 miles between Arcadia and Dubberly due to floodwaters covering the roadway, according to the Department of Transportation. In the South Shreveport metro area, an 8-mile stretch of I-49 near Wallace Lake remained closed on Friday.

Clarksdale Mayor Bill Luckett declared a state of emergency Friday, estimating that at least 100 homes have been flooded after more than 10 inches of rain soaked the area, reports the Associated Press.

As of Friday, about 300 people have been evacuated in the Delta since Wednesday due to the severe weather, according to Mississippi Emergency Management Agency (MEMA) director Lee Smithson.

North of Hattiesburg, flood water was reportedly entering homes in the Rawls Springs and Glendale communities Friday morning, according to NWS storm reports. There were also reports of water rescues in Seminary and Petal, according to storm reports in other areas.

Gov. Phil Bryant declared a state of emergency Thursday to assist the areas of the state affected by flooding, which worsened in parts of western and northwestern Mississippi that morning, leaving some roads flooded.

100 homes in Clarksdale, MS near Pierson Street evacuated due to flooding. pic.twitter.com/X6ob4rdmVm

Homes in Bolivar, Coahoma, Tunica and Washington counties were flooded and three dams have been breached in DeSoto County, according to a release from the Mississippi Emergency Management Agency. Roads throughout the state were flooded, and some sustained damage due to floodwaters.

In rural southeastern Oklahoma, officials confirmed a 30-year-old man drowned in his SUV Tuesday night after attempting to cross a bridge covered in floodwaters, the AP reported. The victim was identified as Michael Liles of Broken Bow. A passenger in the SUV was able to swim to safety, the report added.

Gov. Asa Hutchinson issued a disaster declaration Thursday for 11 counties that have been hit hardest by heavy rainfall, according to the AP. Emergency personnel reported multiple water rescues and prepared to evacuate several neighborhoods after more than 14 inches of rain fell.

Roads had to be closed due to flooding and a roadway was washed out in a least one county. According to an Arkansas State Highway and Transportation Department spokesman, a 20-foot span of Arkansas Highway 334 had been washed out by flood water flowing in a trough underneath the road.

Ten people had to be evacuated from four Shelby County homes that were surrounded by water overflowing from the nearby flooded Loosahatchie River Friday, according to the Associated Press. Using an amphibious vehicle, rescuers maneuvered through the neighborhood's roads, which were swallowed by floodwater.

"The water had been rising all night to the point that they could not get out of their homes," Shelby County Sheriff's Office spokesman Mickey Keaton told AP.

Three women had to be evacuated by the Jackson Fire Department from two homes near an overflowing creek Thursday, the AP also reports. According to Madison County emergency management director Marty Clements, officials were monitoring two subdivisions where high water was becoming an issue.

Dozens of roads in Shelby, Tipton and Madison counties were shut down Thursday. Downed trees in Memphis blocked roads and a small mudslide partially closed a busy road running along the Mississippi River, the AP also reported.

Streets were flooded in Memphis as heavy rain persisted Thursday, and in other parts of western Tennessee, some residents had to be rescued from floodwaters. In Union City, where at least 4 inches of rain fell Wednesday, crews had to rescue a driver who got stranded in flooding along Knox Daniel Road, according to NWS storm reports.

Nearly 10 inches of rain fell in parts of the Lone Star State, and in some areas, the impacts were even worse than the catastrophic flooding that occurred in Texas last May.

Newton County Judge Truman Dougharty ordered a mandatory evacuation of all residents living along the Sabine River from Burkeville to Deweyville, reports 12 News. The evacuation went into effect at 7 a.m. Saturday. A midnight curfew will be implemented tomorrow for residents in flooded areas.

The Panola-Harrison Electric Co-Op said it would be suspending service to areas along Big Cypress Bayou to avoid short circuiting and power-line arcs that could cause fires, the Associated Press reports.

In Bexar County, a school bus flipped after sliding off a slick road Wednesday morning, the AP also reported. The driver and another adult suffered minor injuries, but two special-needs children on board were not injured, Bexar County Sheriff's Office spokesperson James Keith told the AP.

Tuesday morning, straight-line winds caused damage in Stephenville, where a narrow EF1 tornado was also confirmed by the NWS.

During the height of the storm Tuesday, the awning of a gas station in Saginaw was blown off by strong winds, according to CBS DFW. Store clerk Tanya Jackson said two vehicles were parked at gas pumps underneath the awning and the drivers managed to escape just before it came down. Jackson was able to hit the emergency stop on the pumps before the awning collapsed, but some phone and cable lines were knocked down and trapped underneath. The store's driveway was left impassable.

A look at the damage on Saginaw Main at 820 @KRLD#txwxpic.twitter.com/wzurKqwxVt

In the town of Denton, a school bus was trapped in floodwaters Tuesday morning, and crews had to pull six children and the driver to safety, according to NBC Dallas-Fort Worth. There were no injuries, and the children were dropped off at Hodge Elementary School, the report added.

(MORE: In a Flash Flood, a Vehicle Can Be Your Biggest Danger)

To the southeast, a man was injured Tuesday morning in Garland when strong winds tore the roof off a building and threw it into the van in which he was sitting, according to the Dallas Morning News. The man had serious injuries, and after emergency responders pulled him from the van, he was transported to a local hospital, Lt. Pedro Barineau told the Dallas Morning News.

Monday night, the NWS reported several structures and vehicles were damaged by a possible tornado in Cool near Highway 180. The Parker County Sheriff announced that as a result of the storm, an entrapped man was rescued but wasn't hurt, and one horse suffered a broken leg. No other injuries were reported.

Following a damage survey, the NWS confirmed a tornado hit the area and assigned it a rating of EF1. Cool is located about 45 miles west of Fort Worth.

In all, six tornadoes were confirmed in Texas from this round of severe weather.

In southeastern Texas, a man was killed Monday night when his kayak capsized as strong storms moved into the Houston area, the AP also reported. The body of 22-year-old Francisco Ruben Garza, of Hidalgo, was found in Dickinson Bayou, near Galveston Bay, after he and another man went kayaking, police spokesperson Tim Cromie said in a statement. The men were fishing as the storm moved in, but Garza was not wearing a life jacket, he also said.

RELATED: Photos from the storm flooding

Rescue boat overturns in Seminary, Mississippi, sending 5 into floodwaters
Up Next

Freak hailstorm wallops Australia amid deadly fires: 'It was like Armageddon'