See the selfie igniting a debate about homelessness in L.A. 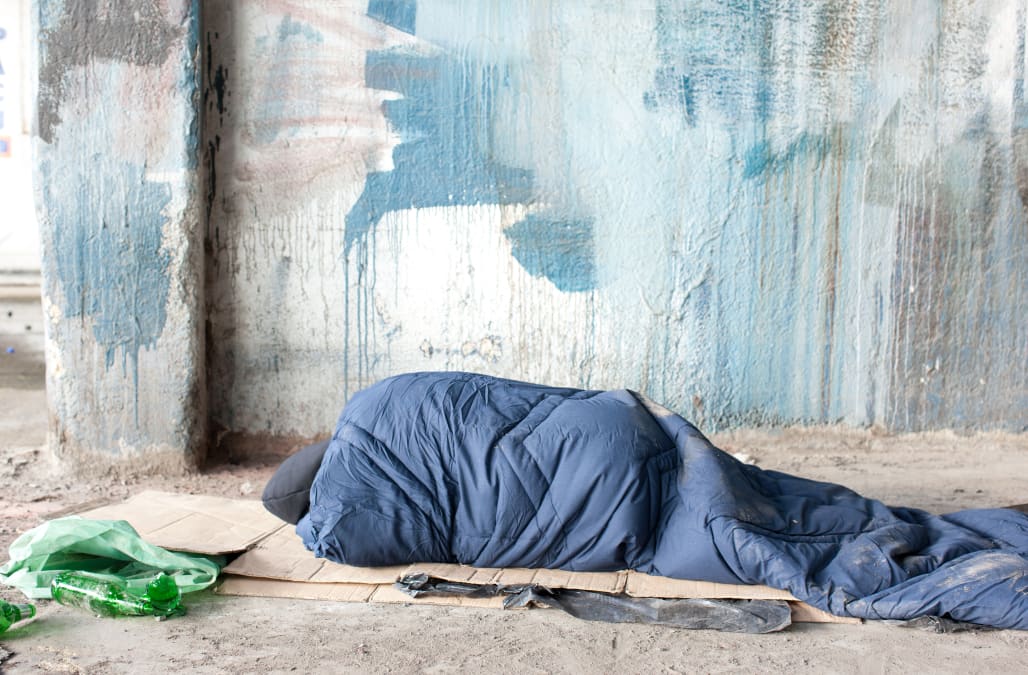 Since September a mural on Sunset Boulevard in Los Angeles' eclectic Silver Lake neighborhood has served as an inspirational reminder of the need for human connection. "Stand here and think about someone you love," read the words painted in black on the mural by L.A.-based author and artist Dallas Clayton. Two cartoonish arms painted on the mural's bright, colorful backdrop extend toward the sky, giving folks who stand between them the warm, fuzzy feeling of being hugged.

A picture snapped on Sunday of two women taking a selfie in front of the mural has ignited a heated debate over how people living in the city—which has the largest homeless population in the United States—interact with folks who are down-and-out.

RELATED: Skid Row Is Packed, So Why Isn't L.A. Down With Tiny Houses for the Homeless?

As seen in the photo below, at the base of the mural, next to the feet of a woman being photographed, a homeless man is asleep on the sidewalk. 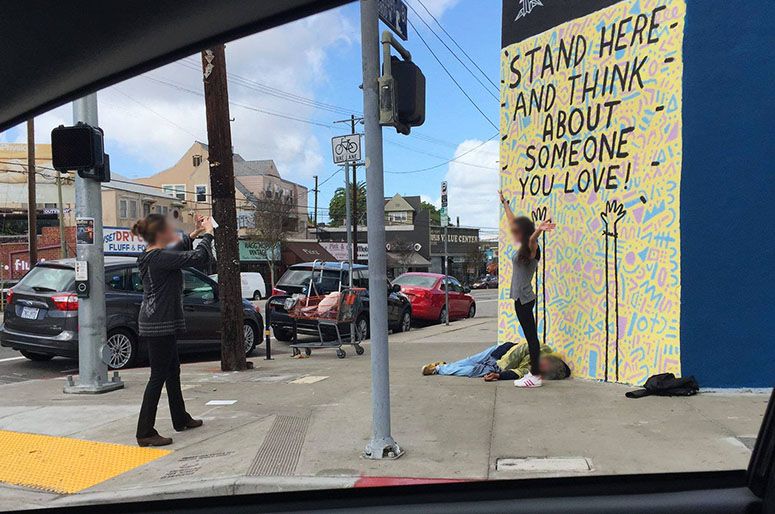 Although many people are condemning these women and the photo as an example of how blind some folks in Los Angeles have become to homelessness, in an email to TakePart, Clayton, the artist behind the mural wrote that he "felt sorry for everyone involved," when he saw the picture.

Although Silver Lake has experienced significant gentrification over the past decade, the neighborhood's homeless population lives in tents, sleeps under tarps, or huddles at bus stops—just like the approximately 44,000 other people with no place to live in Los Angeles. In September city officials pledged to spend $150 million over the next two years—and approximately $2 billion over the next decade—to help get people off the streets. The city is following a "housing first" model, which seeks to put people in homes, and then address their other challenges, such as mental health or substance abuse issues.

RELATED: What If the Key to Ending Homelessness Is Just That—a Key?

Rich Michalowski, a real estate agent who lives in Silver Lake, wrote in an email to Take Part that he held up traffic for about one minute while he took several pictures of the two women.

"The photographer was directing the woman on where to stand, how to pose and suggested she take off her jacket," explained Michalowski. "At one point the photographer directed her to move closer to the homeless man so she could center the photo. They were still at it when I drove away."

Michalowski shared the picture in a Facebook group for area residents. It quickly made its way to Reddit, was picked up by local media, and plenty of people began condemning the women for snapping the image. "There's a certain amount of irony involved in posing for a warm fuzzy picture while trying not to stand on a homeless man's head," wrote one commenter on Facebook.

Other folks defended the women. "When there is a homeless man in front of the grocery store camped out asking you for money... most people still walk right by and do their shopping... so I am not going to be pissed at these girls for wanting an instagram photo," wrote another resident.

Over the past month local homeless activist Elvis Summers has clashed with city officials over the removal by sanitation workers of some of the tiny houses he has built to provide folks a safe, warm place to sleep. To some Angelenos, that makes the picture of the women taking a selfie in front of the mural, "So Los Angeles," as one Facebook commenter put it.

"I think a lot of people want to judge others when they are in situations like this—make comments like 'this is what's wrong with the world,' but I don't assume the girl in the photo are cruel or terrible people who hate the homeless or think themselves better," wrote Clayton. "I just imagine there to be a disconnect, likely a systemic disconnect that allows someone to move through the day like that."

RELATED: 8 Ways America's Cities Are Heartlessly Getting Rid Of the Homeless

The artist wrote that the mural, which is part of a series that he's put up across the city are merely asking folks to reconnect with the people who they love. And that might also include the city's homeless.

"Empathy can be tricky. The further you get away from someone or some thing the harder it can be to relate, to feel emotionally invested," wrote Clayton. "The person in your phone or on your computer screen might not even feel like a person to you, just as the same person sleeping on the street. Try to remember that both are human beings, both with thoughts and hopes the same as you. Try to find a commonality, try to mine that empathy even when it seems impossible."

Clayton also issued a challenge worth considering:"Sit for one minute and truly consider a reality where you were homeless, without resources, without help or hope, and see how it colors your opinion on the issue, see if it gets you any closer to that crucial human connection necessary to bring us all together," he wrote. "There's hope out there still, don't give up on each other."

Check out another great initiative to help out the homeless community:

Related stories on TakePart:
When Temperatures Drop Below Freezing, What Happens to the Homeless?
22 Mayors Weigh In on Escalating Levels of Homelessness and Hunger
Now There's Housing for the Homeless Built in a Factory