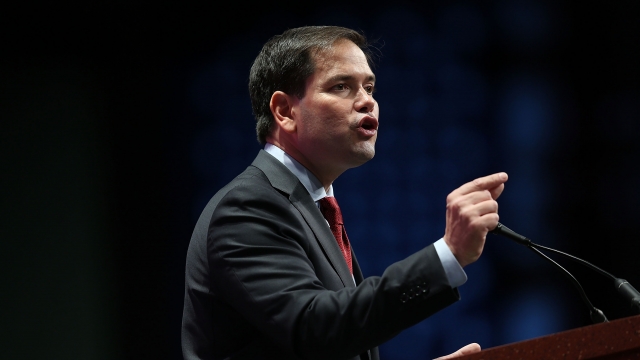 That's after Cruz volunteers repeated a CNN report that team Rubio was considering dropping out of the presidential race before the primary in Rubio's home state of Florida — a report the Rubio campaign calls false.

That email from Cruz volunteers said, "According to multiple news sources, Marco Rubio's advisers are telling him to drop out of the presidential race before losing his home state of Florida in a few days' time."

"I'm going to ask you to stop reading that sort of fiction on air," Rubio spokesman Alex Conant told CNN. "That is fiction and CNN should stop reporting it."

A later statement from the Cruz campaign disowned the email and said, "Some volunteers in Hawaii were involved in the posting. The individual(s) who sent this had no authority from the campaign to do so."

CHECK OUT: 10 facts about Marco Rubio

1. His parents, Mario and Oria, are Cuban immigrants.

2. Attended Tarkio College for one year on a football scholarship before he later transferred to Santa Fe College.

4. His wife of 17 years, Jeanette, is of Colombian descent and was once a Miami Dolphins cheerleader.

5. He went viral with a sip of water. Rubio gave the official Republican reaction to the State of the Union in 2013, but the only detail most people remembered was the moment in which he became so parched that he reached for a water bottle to quench his thirst.

6. Though he was baptized as an infant in the Catholic church, he was also baptized as Mormon later in childhood when his family lived in Las Vegas. He is now a practicing Catholic.

7. He teaches political science at Florida International University in Miami.

(Photo by Charles Ommanney for the Washington Post via Getty)

8. He says the first concert he ever attended was a Prince show.

9. His family used to call him Tony, which came from his middle name Antonio.

10. He was speaker of the Florida House before he was a U.S. Senator.

Last month, Cruz fired his spokesman for repeating a false report that Rubio had dissed the Bible.

Cruz also apologized to Ben Carson after his campaign told Iowa voters the neurosurgeon was dropping out before the caucus.