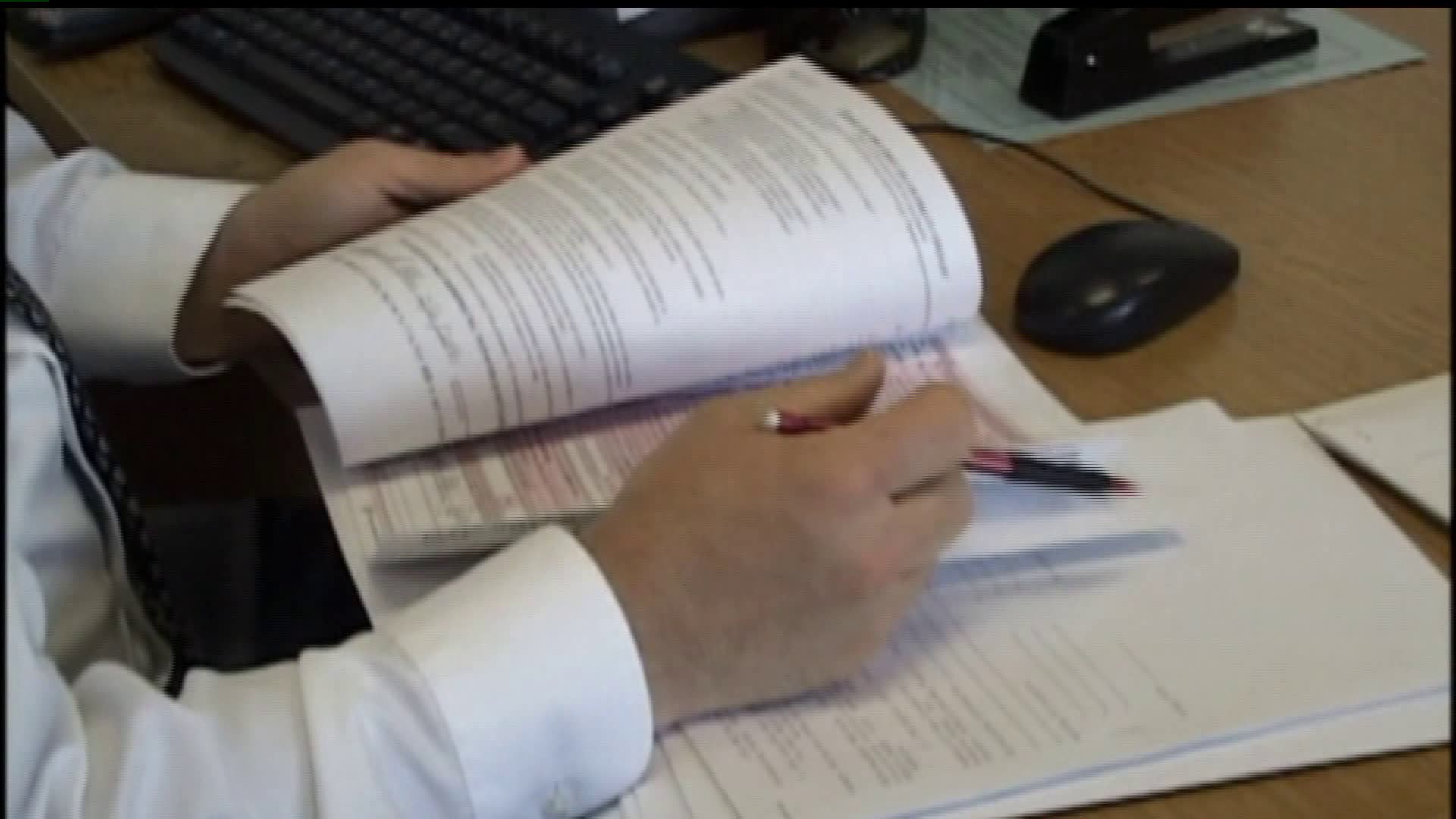 When you think about filing taxes, you might focus on that specific cutoff day in mid-April. However, the deadline for filing taxes isn't the same for everyone. Tax day can vary based on the type of work you do and where you live.

More importantly, there are a number of other important tax deadlines that occur along the way. That's one reason people call the first several months of the year tax season. See which tax deadlines apply to you.

1. Deadline for Filing Most Tax Returns

This year, the big tax day for most people is April 18 instead of April 15, due to Emancipation Day. People in Maine and Massachusetts have until April 19 to file taxes because April 18 is Patriots Day in those states.

"If you reach the filing deadline, and don't have the money [to pay your taxes], it's better to go ahead and file and set up a payment plan. Otherwise, you'll face penalties for failure to file and failure to pay," said Goble.

Employers are supposed to provide you W-2 forms for your wages by Feb. 1. If you were self-employed or worked as a contractor, any clients that paid you over $600 last year must issue you a 1099-MISC by Feb. 1. (You still have to file an income tax return if your net earnings from self-employment were $400 or more, whether or not a client sent you a form.)

By Feb. 15, you should have received the tax documents for most other forms of income, too — including real estate transactions, retirement distributions, interest and dividends and winnings from gambling.

"You can't just ignore income because you didn't receive a form. If you earned it, you have to report it. Otherwise, the penalty compounds quite rapidly," said Scott Goble, founder of Sound Accounting. The penalty for failure to pay is ½ of 1 percent of the unpaid taxes, charged monthly, up to 25 percent and the penalty for failure to file is usually 5 percent of the taxes due, which is also charged monthly up to 25 percent.

If you haven't received your forms, contact the party responsible for sending them. If you don't get any results that way, contact the IRS and get a copy. Either way, be sure to file with all your forms.

View the top tips to avoid a tax audit:

5 PHOTOS
How to avoid a tax audit
See Gallery

Double check your figures to assure there are no mistakes

Be sure to be 100% honest, and report your numbers realistically

Those in the highest and lowest income brackets are most often targets of fraud, and thus, audits

Don't draw too much attention with unusual or unrealistic deductions

If you had hired help in your home, such as a nanny, maid, groundskeeper or private nurse, and you paid over $1,900 in wages last year, you're considered a household employer. Like other employers, you're required to provide your workers with W-2 forms by Feb. 1.

You also have to submit W-2 and W-3 forms to the Social Security Administration by Feb. 29. If you file electronically, the deadline is March 31. You'll also need to file a Schedule H and pay your household employment taxes with your tax return.

If you miss these tax deadlines, get the forms out immediately. The penalty for failing to provide W-2s is $250 per employee for each personal copy and another $250 for each government copy, which means you might have to pay up to $500 per person if you're late, said Goble.

Read: How to Save Money If You Owe Taxes This Year

There are three healthcare-related tax forms being issued this year. The 1095-A is for people who received coverage through the Health Insurance Marketplace. The Marketplace is required to provide that form by Feb. 1. Don't try to file your tax return without it. "You'll need information from it, including how many months your coverage was active and the cost," said Jim Torgerson, owner of Consolidated Tax Services.

Form 1095-B comes from health insurance providers and 1095-C comes from employers who offered coverage. The deadline for companies to provide these forms is March 31. They might help you, but aren't required for filing taxes, so you don't have to wait for them if you don't need them, Torgerson said.

Farmers and fishermen should take special note of these tax deadlines. If you work in these industries, you should have paid your estimated taxes for 2015 by Jan. 15. If so, you can wait until April 18 to file your 1040. If you didn't pay all your estimated taxes by Jan. 15, you were required to file your return and pay the outstanding balance by Feb. 29, or face a penalty.

Furthermore, if you filed and paid your taxes by March 1, you don't have to pay estimated tax for 2016, said Goble. However, if you expect to owe a lot for the 2016 tax year, you might want to go ahead and make estimated payments."You don't want to get to the filing deadline and owe money you don't have," said Goble.

If you owe taxes, making those last-minute contributions can reduce your bill if you put the money into a traditional IRA. Roth IRA contributions aren't tax deductible.

However, you shouldn't make a habit of getting down to the wire before you make IRA contributions because you're missing opportunities, said Elle Kaplan, CEO of LexION Capital Management. "For those extra months you waited to contribute, your money could have been harnessing the power of tax-free growth instead of sitting in a savings account," she said.

7. Deadline to File an Extension

If you can't file your taxes on time, you can get an automatic six-month extension. However, you must file an application by your normal tax-filing deadline. Practically everyone qualifies for an extension, so you don't have to worry about getting denied, said Goble.

Keep in mind this is an extension for filing taxes, not an extension for paying taxes. That means you must estimate the amount you owe and send in the payment. If you don't, you'll be liable for penalties and interest.

People make mistakes, such as forgetting to report income or forgetting to claim certain credits. Luckily, the IRS gives you up to three years to make corrections. If your 2013 tax return has errors, the deadline to file an amended return is the final filing day for 2016 tax returns.

Remember, you can file an amended return whether you owe taxes or the IRS owes you, said Torgerson. If you're due a refund, you'll get what you're owed plus interest.

If you're living outside of the U.S. or Puerto Rico on tax day, you're not subject to the same tax deadlines as everyone else. You might qualify for an automatic two-month extension. You don't need to file a special form, just attach a statement to your return stating whether you were living and doing business abroad, or were stationed abroad in the military.

The automatic two-month extension gives you additional time to file and to pay without facing penalties. However, you will be charged interest on taxes owed if you don't pay by the normal filing deadline.

If the two-month extension isn't enough, you can request an additional four-month extension using Form 4868, for a total of six months. Remember that this isn't an extension for paying taxes. If you don't pay by the end of your two-month extension, the interest will keep compiling and you might be charged a penalty unless you have reasonable cause.

U.S. citizens, residents and businesses with one or more foreign accounts that were valued at $10,000 or more at any time last year must file a Foreign Bank Account Report. This form is designed to help to combat money laundering and terrorism, and it must be submitted to the U.S. Treasury, not the IRS. It can only be filed electronically and must be completed by June 30.

The FBAR is commonly overlooked, said Goble, but you shouldn't take it lightly. "Enforcement ramped up after 9/11. If you miss the deadline, you can face a civil penalty of up to $10,000. And if the government can show that your not filing is a willful violation, the penalty can be $100,000, or 50 percent of the account balance. That can ruin someone if they're not careful," he added.

This article originally appeared on GOBankingRates.com: 10 Most Important Tax Deadlines In 2016

More from GOBankingRates:
10 Commonly Missed Tax Deductions
What to Do If You Lost Your W-2
10 Dangerous Excuses for Not Filing Your Taxes

What is a capital asset, and how much tax do you have to pay when you sell one at a profit? Find out how to report your capital gains and losses on your tax return with these tips from TurboTax.

Due to the recent coronavirus pandemic, many businesses and individuals are facing challenging times — including those that are self-employed. The government has issued unemployment insurance for self-employed individuals to help them manage their finances.