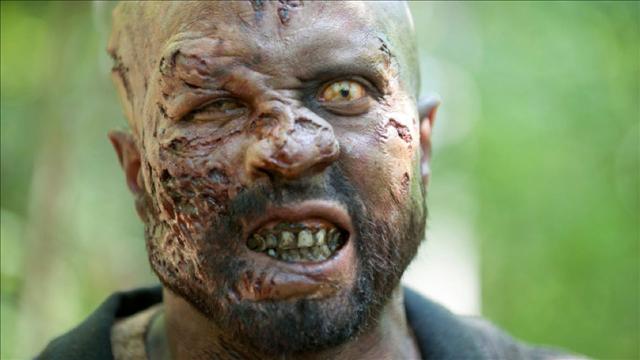 Johnny Depp made a surprise appearance on this week's episode of "The Walking Dead."

Well, at least his head did.

During a scene in the episode, Rick (Andrew Lincoln) has three severed walker heads set out in front of him on the road for a ploy he is going to attempt with The Saviors.

According to co-executive producer Greg Nicotero, who also directed the episode, his own head served as the mold for one while Depp's was another.

"One of the other heads, I don't know if I'm going to get in trouble if I say this, was Johnny Depp," Nicotero told Entertainment Weekly. "I think we had sculpted an emaciated version of a dummy head for something and we used Johnny Depp's head as a basis just for a clay sculpt. I can't remember who the third one is, but I'm in good company."

This is not the first time famous heads have found their way onto TV, though they are not always received so positively.

Back in Season 1 of "Game of Thrones," creators David Benioff and D.B. Weiss apologized for putting a prosthetic head of President George W. Bush on a spike, hours after news that their show had done so hit the internet.

"We use a lot of prosthetic body parts on the show: heads, arms, etc." Benioff and Weiss said. "We can't afford to have these all made from scratch, especially in scenes where we need a lot of them, so we rent them in bulk. After the scene was already shot, someone pointed out that one of the heads looked like George W. Bush."

Check out a photo of Depp's head on "The Walking Dead" below.

Find out whose head molds (including one A-lister) these were on tonight's #TheWalkingDead: https://t.co/rC5ppq8TRlpic.twitter.com/C1la9WYANo

Depp played the title character in John Waters’ 1950s parody, which successfully spoofed both Elvis Presley and the ’70s juvenile delinquent film Scared Straight! His character was named for his uncanny ability to shed a single tear whenever he became emotional.

In his first collaboration with Tim Burton, Depp played a shy, artificial man named Edward, whose creator passed away before he was able to give him a set of human hands, leaving him with gigantic scissors instead. Luckily, Edward finds a career as a hedge trimmer and hair stylist.

Eccentric silent-screen icon Buster Keaton was the inspiration for Depp’s role as Sam in this charming story of an oddball drifter who falls for a woman emotionally detached from the world around her.

Depp showed his comedic chops with his over-the-top portrayal of 1950s cult movie auteur and self-proclaimed transvestite Ed Wood, who many in Hollywood regard as the worst director of all time. Burton, Depp’s longtime partner in weird, directed the biopic for their second collaboration.

Depp charmed audiences with his portrayal of a young man convinced he’s actually the fabled Spanish lover Don Juan. Set in modern day New York, “Don Juan” finds himself instantly enamored with nearly everyone who crosses his path at a mental institution.

Depp continued to expand his horizons, taking audiences on a trippy, mescaline-laced walk on the wild side for this film, in which he played a high Hunter S. Thompson on an outrageous adventure in the desert.

Pirates of the Caribbean: The Curse of the Black Pearl (2003)

Never one to embrace big-budget studio pictures, the role of Captain Jack Sparrow in the film based on the Pirates of the Caribbean ride at Disney theme parks allowed Depp to do just that. Though most would probably wager that the opportunity to tap into his inner Keith Richards is the real reason why Depp took the part.

Charlie and the Chocolate Factory (2005)

Depp took a risk reprising the role of Willy Wonka made famous by Gene Wilder in the 1971 classic Willy Wonka and the Chocolate Factory. The reviews were mixed (Wilder panned it), as Depp straddled the line between affable and eerie.

The dark Stephen Sondheim musical directed by (who else?) Burton centers on Depp as Sweeney Todd, a barber out for revenge against any and all who have wronged him.

Depp’s version of the tea-guzzling, colorful carpetbagger known as Tarrant Hightopp (the Mad Hatter) is sneering and eccentric, and undoubtedly one of his most humorous onscreen creations to date.