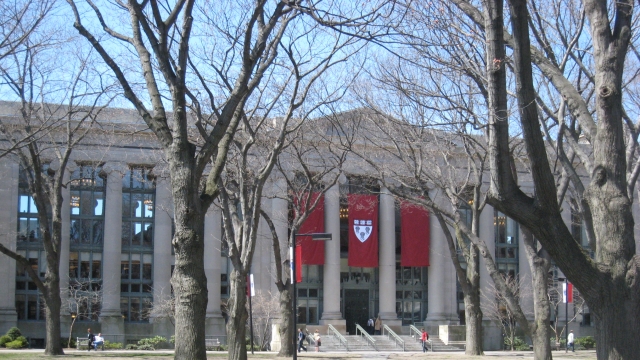 Harvard Law School has moved to drop its official shield after months of protests over the symbol's link to 18th-century slave traders. The decision comes from a committee that was formed to examine the issue by Dean Martha L. Minow after protests began against the emblem last fall, followed by the vandalism of portraits of the some the school's black professors. In the committee's judgment, Dean Minow announced on Friday night, the crest no longer represents the values of the school, and thus voted to revoke the symbol. That request has now been sent to the Harvard Corporation, which has the final say in the matter.

The current crest, which has been in use since 1936, incorporates the three sheaves of wheat from the coat-of-arms of the Royall family, a member of whom funded the first law professorship at Harvard. That family's patriarch, Isaac Royall Sr., built his fortune as a slave trader and slaveholding plantation owner on the island of Antigua, where he co-owned a slave ship and helped brutally suppress a slave revolt, as detailed in a book about Harvard Law School's first century:

The Royalls were clearly a target [of the 2,000-person uprising]. The revolt was discovered by pure chance at the last minute. Retribution was complete and terrible. Five slaves were "broken on the wheel," six gibbeted alive, and seventy-seven burned at the stake, including Hector, the trusted head slave, or "driver," of the Royall family. Within a year, the Royalls decided to leave for Massachusetts, bringing at least twenty-seven slaves with them.

Royall's son, Isaac Jr., continued to hold and sell slaves after relocating to Massachusetts, and later left the colonies as a Tory refugee as the Revolutionary War broke out. Upon his death in England, Royall left a sizable amount of money to Harvard in his will, which helped establish the first law professorship at the school. The importance of that donation was then recognized in 1936, when the Royall family's coat-of-arms was incorporated into the law school's official shield.

The decision to drop the emblem follows Harvard's recent decision to eliminate the word "master" from faculty titles in an effort to remove slave-holding references at the school. As the Harvard Crimson notes, the removal of the crest could lead to other changes as well, since "reconsidering the seal raises a question of precedent, as some buildings on campus, such as Mather House, bear the name of former slave owners."

Other prestigious universities -- Princeton, Yale, Amherst, and Oxford -- have recently been facing their own similar controversies as some students and faculty members have sought to strip those schools' present-day references to historical figures with connections to racist ideologies or actions, though the universitys' communities have often been divided over the issue. At Harvard, a recent (unscientific) straw poll indicated that just over 54 percent of law school students supported the removal of the shield, while a little more than 30 percent wanted to keep the emblem while acknowledging its racist history.

More from NYMag.com:
Non-Trump Republicans Break Out Into Turf Wars
7 Actresses We Would Have Cast As Nina Simone Instead of Zoe Saldana
Does Encouraging Suicide Make You a Killer?