After Iowa and New Hampshire, it's on to South Carolina and Nevada.

Republican voters will head to the polls in South Carolina on Saturday, while Democrats in Nevada will caucus for their preferred candidate.

On both sides, the insurgent "outsider" candidates are trying to sustain huge streaks of momentum off impressive wins in the New Hampshire primaries.

Now, Trump is looking for a defining victory in the Palmetto State, while Sanders is trying to prove he can challenge Democratic front-runner Hillary Clinton in a state whose electorate is more favorable to the former secretary of state.

Our rankings are based on the Real Clear Politics averages of national polls and those in the states of South Carolina and Nevada. We also factored in the candidates' delegate count and their finish in Iowa and New Hampshire, as well their momentum (or lack thereof) over the past few weeks.

All poll results as of Thursday.

Rubio was perhaps the biggest winner from the Iowa caucuses, as he and his campaign played the "expectations game" perfectly and surprised with a stronger-than-expected, third-place finish right behind Trump.

He stumbled ahead of New Hampshire with a widely panned debate performance, ending up fifth in the primary. Now, he has seen a swing of momentum back his way ahead of the South Carolina primary. On Wednesday, he secured the endorsement of South Carolina Gov. Nikki Haley, who is highly popular in the state.

And his polling trends leading into primary day look very much like they did heading into the Iowa caucuses.

Cruz rode a record turnout in Iowa — something that was supposed to benefit Trump — to a surprisingly robust victory. He has built momentum heading into his target — the "SEC primary" states in the South, many of which vote March 1.

Cruz's under-the-radar campaign has put him in sneakily good position to capture the nomination. And his eye-popping fund-raising numbers mean he will most likely be in the race for the long haul.

Trump has lit the political world on fire since his entry into the race last summer. And he has showed surprising staying power — we're now on month No. 9 of the Trump show.

He lost in Iowa. But the Hawkeye State was never fertile ground for someone like Trump, a brash New York billionaire. And a major win in the Granite State proved the formidable nature of his candidacy.

Trump, leading big in polls of South Carolina, could start charting his course toward the nomination in the Palmetto State.

Clinton is (an increasingly shaky) No. 1 here because she has proved formidable in polling and fund-raising and has still has a clearer path to the nomination than anyone on the GOP side.

But Clinton is facing an increasingly rugged challenge from Sanders, who threatens to win easily a state she captured in 2008. Her campaign is teetering perhaps more than it ever has been, as her "firewall" — her strength in states with more diverse Democratic electorates — is showing signs of melting in Nevada.

If Clinton loses in Nevada, it would be a major blow to a campaign that once seemed to boast the inevitable Democratic presidential nominee.


And to the polls: Here's a look at where the candidates stand in their respective parties when combining their delegate totals and their standing in national, South Carolina, and Nevada polls. 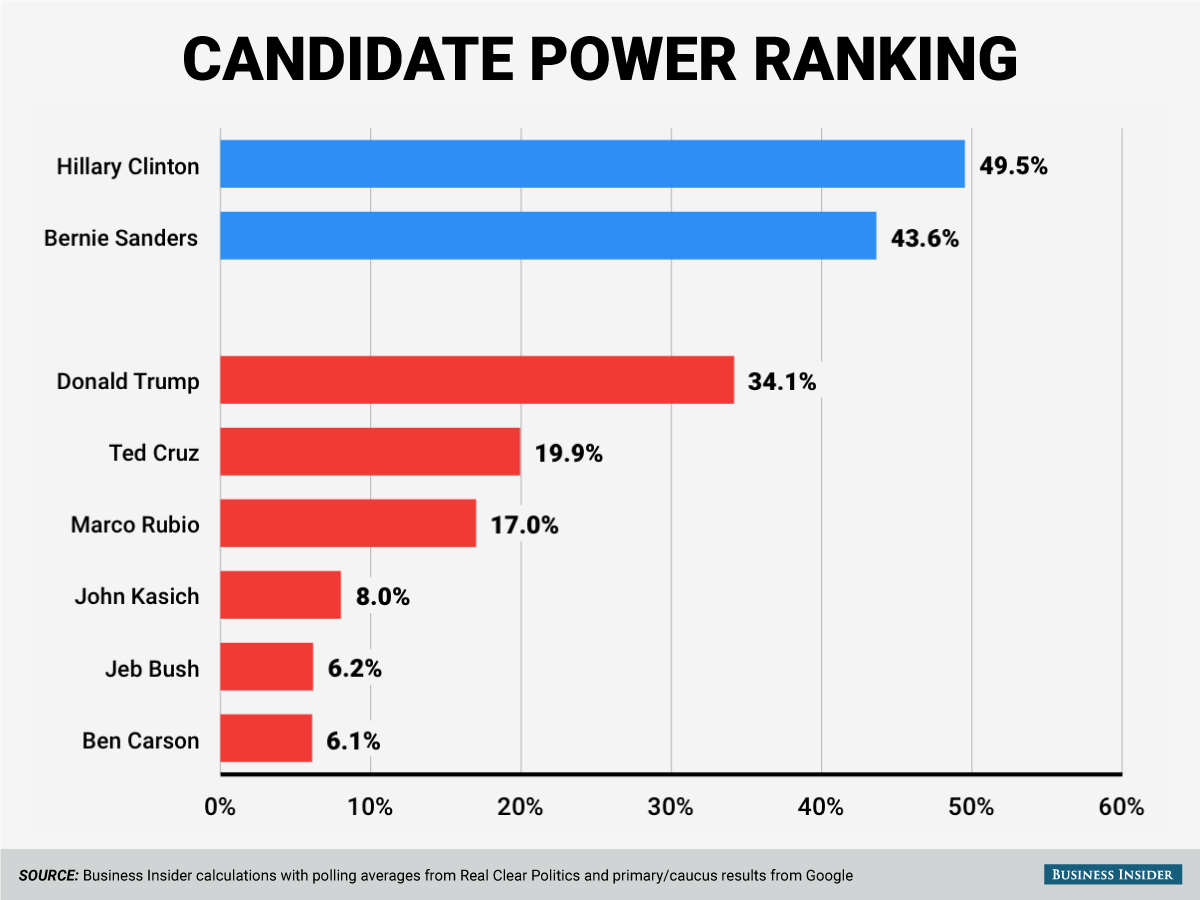 SEE ALSO: Donald Trump had a monster night — here's how he did it
Tags
Read Full Story