Gigi Hadid shows off her underwear in revealing black jumpsuit

Gigi Hadid sure knows how to show some skin!

The 20-year-old model continued her streak of flaunting her bangin' bod on Tuesday night when she attended the Sports Illustrated Swimsuit Issue launch at Brookfield Place in New York City.

Hadid, whose third straight appearance in the Swimsuit Issue is equally as stunning, showed up on the red carpet in a skin-tight black jumpsuit covered in skin-revealing cutouts. The look left little to the imagination and showed off the black undies she was wearing underneath. 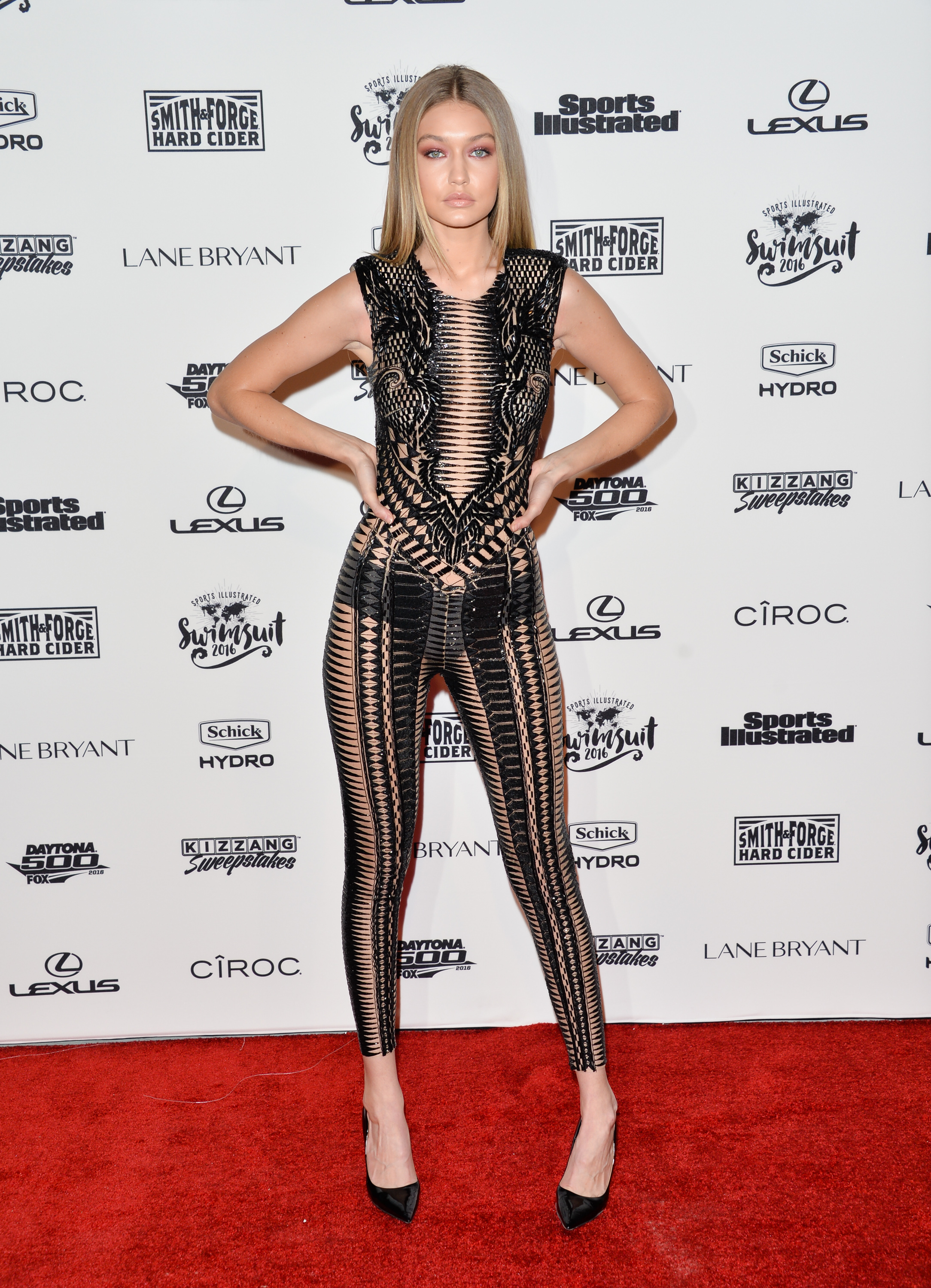 She completed the look with black pumps and her sleek blonde locks flowing down her back.

See more celebs who flashed their undies on the red carpet:

Gigi Hadid shows off her underwear in revealing black jumpsuit

Iggy Azalea definitely put the hot in hot 100 at the Maxim Hot 100 party. The singer dazzles in a see-through dress with a triangle pattern throughout an da peek-a-boo neckline. She left her hair down in sultry waves.

Talk about a head-turner! Erin Andrews nearly stole the spotlight from the dancers at the "Dancing With the Stars" finale when she stepped out in an underwear-baring ball gown. The sexy dress showed off her sleek physique.
Lara Stone not only went for a highly-risque bottom half that showed off her knickers, she also turned heads with her top half by going out sans bra. Talk about taking the risque trend to the next level. (Photo by Antonio de Moraes Barros Filho/FilmMagic)
Nudist! Hailey Baldwin flaunted her model figure in a sheer, mesh dress, which she teamed with a nude leotard. (Photo by JB Lacroix/GC Images)

Gwen Stefani hit the "SNL" after-party at Heartland Brewery and Chophouse in New York City in April in a head-turning ensemble. The underwear-heavy look started out with a corset teamed with a sheer turtleneck, but the bottom half was just as scandalous. She donned a multi-colored, ruffled skirt with a sheer section that revealed her derriere.

The day before her rear-end flashing look, Stefani rocked another underwear style and stepped out in a bra and a set of fishnet pantyhose. She wore her pants low to accentuate the hose and her bra --- and needless to say she's got an incredible body. (Photo by James Devaney/GC Images)

Eva Longoria gave everyone a show at Paris Fashion Week when she hit the Shiatzy Chen show in a sheer black shirt and blouse that showed off her undergarments. (Photo by Pierre Suu/Getty Images)
Hot to trot! Robyn Lawley wore a dress to the 2016 Sports Illustrated Swimsuit Launch in NYC that was a mix between dominatrix lingerie and a flirty fit and flare and needless to say the outfit was a bit flashy. (Photo by Michael Stewart/WireImage)
So much for a charity event! Actress Sahar Biniaz left very little to the imagination at the amFar gala when she donned a lace sheath without a bra and a tiny pair of black undies. What do you think of the wild look? (Photo by Gilbert Carrasquillo/FilmMagic)

Kristen Wiig joined the flashy brigade with this outrageous gold, and silver dress with a see-through bottom for the "Zoolander 2" premiere. She rocked nude knickers to keep it ladylike. (Photo by Dimitrios Kambouris/Getty Images)

Model Ana Beatriz Barros looked part boho, part fashion-forward in this sheer dress with various prints and patterns. She added a set of sheer black tights and high-waisted underwear to finish off her look. (Photo by Marc Piasecki/GC Images)

Chrissy Teigen bared her baby bump -- and a couple of her other assets -- as she hit the town in Los Angeles in February. John Legend's leading lady rocked a see-through knit dress and covered up her growing belly with a set of high-waisted undergarments and a sexy black bra. Talk about a hot mama.

Flower power! Suki Waterhouse rocked this sweet floral frock at the premiere of "Pride And Prejudice And Zombies," but if you look closely it's a little sassier than you'd expect. The dress's sheer skirt showed off the model's fab figure. She teamed the ensemble with a set of nude underwear. (Photo by Samir Hussein/WireImage)

Work it, Demi! The stunning singer showed off her fit figure in a pair of hot pants and knee-high boots on the red carpet. (Photo by Taylor Hill/FilmMagic)
She's a New Year's Eve stunner! Fergie donned another see-through dress to ring in the New Year in New York City. The gorgeous gown showed off her pert posterior and had a geometric pattern. (Photo by Mark Davis/DCNYRE2016/Getty Images for dcp)
Fashion designer Whitney Port turned heads in this fishnet dress at the Golden Globes afterparties. The leggy former reality star rocked a body-hugging leotard underneath and polished off the look with a domino purse.  (Photo by Amanda Edwards/WireImage)

What divorce? Gwen Stefani just split from her husband, Gavin Rossdale, and she definitely hit the AMA Awards in one of the best revenge dresses we've ever seen. The flouncy sleeves and sheer tulle skirt showed off her enviable pins. (Photo by Jeffrey Mayer/WireImage)

It's pretty difficult to outshine a hot husband like Channing Tatum, but his ladylove Jenna Dewan Tatum did just that at "The Hateful Eight" premiere. The "Supergirl" star went for a whimsical look in a coset-like dress with sheer, lace detailing which showed off here incredible body. She paired it with high-waisted boy shorts. Lookin' good Jenna! (Photo by Jon Kopaloff/FilmMagic)

Hot mama! Fergie put her rear assets on display in a sexy see-through dress with white embellishments on the skirt at the 29th FN Achievement Awards. (Photo by Randy Brooke/Getty Images)

She's the gold standard! Eva Longoria showed off her fit figure in this gold lace dress, which had a tropical vibe with it's see-through bottom and leaf-like pattern. (Photo by Rebecca Smeyne/Getty Images)

Ellie Goulding set the lace standard in this stunning black dress. The plunging gown was a hit with a set of high-waisted black panties and sky-high heels.  (Photo by Europa Press/Europa Press via Getty Images)

Julianna Margulies opted for a sexy, sparkly, see-through number that was definitely a head-turner. The 49-year-old actress rocked a sporty pair of underwear to stay covered up at the 2015 CFDA Fashion Awards. (Photo by Dimitrios Kambouris/Getty Images)

That's one way to grab attention! Model Jessica Stam barely covered up in a sheer dress with white, leaf-like embellishments to cover her chest and a tiny pair of undies to shield her bottom. (Photo by Handout/Getty Images)

Little Mix definitely mixed things up in the fashion department at the Cosmopolitan Ultimate Women of the Year Awards. Perrie Edwards stayed on-trend in a sparkling overlay and black underwear and bra. (Photo by Jeff Spicer/WireImage)

White-hot! Model Gigi Hadid took the see-through trend in a classy direction with white underwear and a lace overlay. What do you think of the look? (Photo by Jamie McCarthy/Getty Images for Maybelline)

It's no surprise that Victoria's Secret Angel Lais Ribeiro has a rockin' bod, but she definitely had tongues wagging in this crochet jumpsuit, which she teamed with a pair of black underwear. (Photo by Grant Lamos IV/Getty Images)

Always classy Lily Aldridge showed off her impeccable taste in a sheer gown, which featured a built-in leotard. The plunging neckline and sequined accents were a definite hit. (Photo by Grant Lamos IV/Getty Images)

Kim Kardashian put her baby belly on display this November in a lacy dress with nude underthings to keep her covered up. She polished off the risque look with a diamond choker and a black trench coat. (Photo by Steve Granitz/WireImage)

Lookin' good, Poehler! Amy punched up the sexy level in a gown with a sheer gown with a feather-like pattern on the bodice. The 44-year-old actress was absolutely glowing at the "Sisters" premiere. (Photo by Gilbert Carrasquillo/FilmMagic)

Just a peek! Teresa Palmer arrived at the Women In Film 2015 Crystal + Lucy Awards in a black gown with slits right along her legs and neckline. She pumped up the dramatic look with a deep, red lip color. (Photo by Jon Kopaloff/FilmMagic)

J-Law took the plunge in this sheer, black gown and a bralette that had a sexy witch vibe. The deep currant lipstick and long sleeves took the look to a totally different level. (Photo credit: Getty)