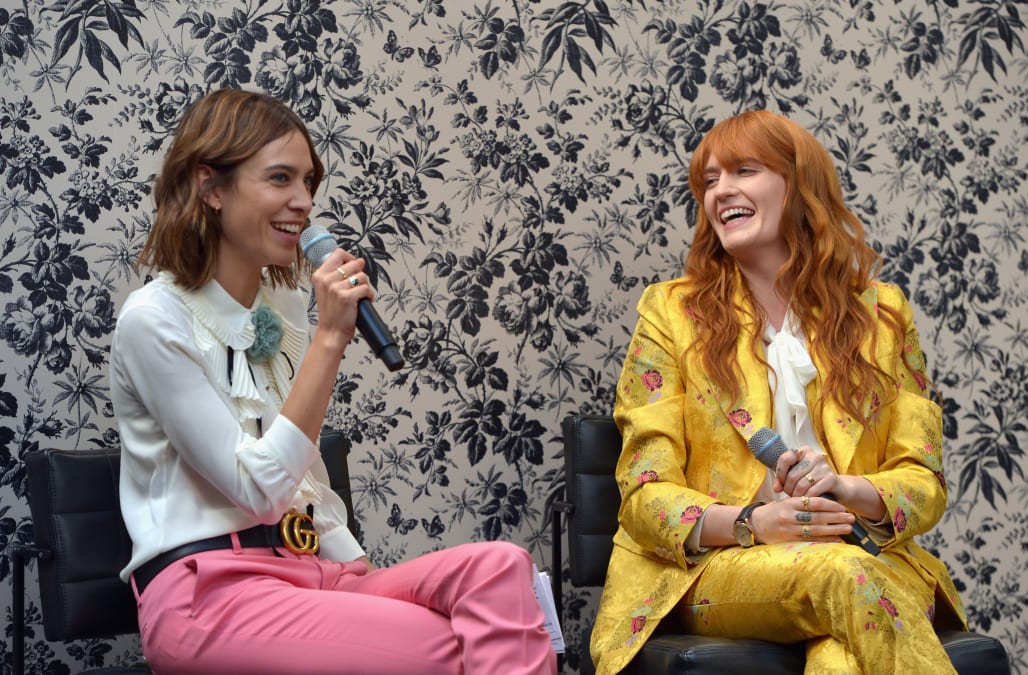 Florence Welch just got a new title to add to her resume ahead of Monday's Grammy Awards -- Gucci brand ambassador.

On Friday, The Florence + the Machine singer was revealed as the Italian brand's new timepieces and jewelry brand ambassador for 2016. According to Welch, she was very inspired by Gucci's creative director Alessandro Michele's vision and he was equally inspired by her music. Welch attended an exclusive event for the big announcement in Los Angeles and did an interview with fashion maven Alexa Chung. Welch opened up about her fashion inspirations, why she loves jewelry and about her latest work. Check out a couple fun facts from the interview:

1. Florence secretly dresses for each album -- and her latest album is more true to who she is

"A certain look evolves around each album. I really don't know what it's going to be when I start making it. As I'm making it this world evolves that I then become completely absorbed in and without fully realizing it it starts to dictate quite strongly like what I wear, how I hold myself onstage. Coming back to this record it felt like the two sides of me onstage and off I wanted there to be less divide, onstage I wanted to wear something I would just wear offstage, because I think there was such a feeling of doing something really raw with this record. I kind of wanted to be like, This is me."

2. She feels a bit naked without jewelry

"When I first started touring I didn't really it was so chaotic and everything you're living in this splitter van there wasn't really room for anything nice. As we were touring I started to pick up little bits of vintage jewelry here and there and it kind of became a memory of every place that I've been to. It's become so a part of me... it becomes part of my hands and I feel quite naked without jewelry. If I step out and I'm not wearing rings I feel kind of weird. Sometimes I wish I was a more static performer so I could go out in really fragile, beautiful things but they'd get completely destroyed. Really precious stuff I kind of leave that in the dressing room."

3. Her Grammy Awards gown is apparently 'magical' and was made by Alessandro

"I am wearing something that's so magical. Alessandro manages to make things that are so pretty without ever being too sweet. So it's just the most beautiful, romantic thing but there's always some kind of edge to it. You don't know if he's done that psychically with his mind. His attention to detail as well, you really feel like everything he's making is a precious object to him and it comes from a very imaginative place. And you can imagine that every piece of clothing has about five intertwining stories to it. I just want to sit down and talk to him about why did you put this here, and what does it mean, and what characters were you thinking about when you made these items of clothing? I feel very honored to be wearing it."

4. She loves to get dressed and think about her clothes in a different way

"When I'm working really hard on a project or making an album I can't get dressed. I just have to put on the most simple pair of pants or leggings because actually getting dressed is a form of creative expression and a form of using your imagination. I have to put a lot of thought into it and then I have to make a record, it's like I have no other thoughts left. But getting dressed is such a pleasure for me. I really love clothes and thinking about it. It's a real form of protection as well. Like a way to feel strong."