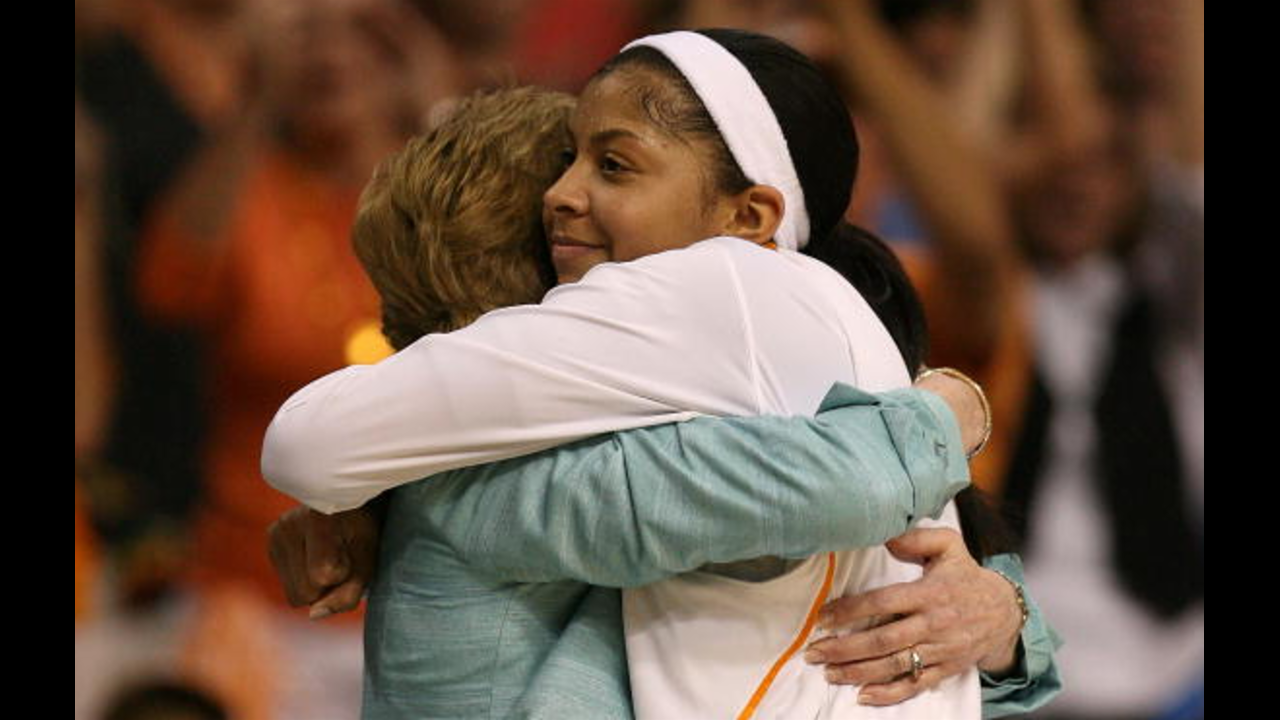 Candace Parker of the Los Angeles Sparks is one of the biggest stars women's basketball has ever known. One of the most heralded players coming out of Tennessee in 2008, she was the first overall pick in the draft and went on to win Rookie of the Year and MVP in the same season.

Now a two-time MVP, the 29-year-old is in a new portion of her career: the veteran leader stage. In partnership with Capital One, she spoke with AOL Sports about her career, and what her future may hold.

One lucky female athlete has the chance to come away with a $200,000 prize by winning the Capital One Cup. What would that mean to them?

I received an athletic scholarship hen I was going to Tennessee, and it meant a lot to me. It helped out a lot. I think it would mean the world to them, obviously. I love what Capital One is doing. They've given, to date, $1 million to women's athletics. It measures every sport, and you're able to get points based on national championships and things like that. It creates a lot of bragging rights around the teams that won. I just wish that when I was in school that something like this was available because it's a lot of fun.

This past season, you took a significant portion of the year off in order to recover mentally and physically, and you wound up posting one of the best seasons you've ever had. How opinion was that rest period, and do you think that will start to become more common in basketball moving forward?

I know that rest period was huge for me. My body needed it. Mentally, I think you can get drained with basketball. In women's sports, it's become kind of a year-round sport, and when you're doing something year-round without a break, you can find yourself going through the motions. I think, for a little bit, that's kind of how it was for me. I was able to get away from basketball, separate myself, and then come back to it and enjoy it and really appreciate it, and not take it for granted. I do think that more players are going to decide to rest their body a little bit. As time goes on, I think that's something the WNBA and overseas are going to have to discuss, before it's impossible for people to play year-round.

What has the transition been like for you, going from a younger star to someone that younger players look up to?

It's definitely a different transition. You start realizing that more players are younger than you than older than you. It's a tough transition but I had great role models coming up and players that I aspired to be like. It's just paying it forward, and realizing that you owe it to the game to mentor young players and they understand how important it is to leave the game better than you came into it.

What's the biggest difference between player professionally in the WNBA and overseas?

By far, the best league in the world is the WNBA. It's the most competitive league, night in, night out. Overseas it's definitely a different style of game. But the way I look at it: It prepared me for international play. The Olympics is played with that style of game. So it prepared me from that aspect. Learning culturally, too, learning as a person. Understanding that other countries exist -- other ways of doing things exist. It exposed me to a lot of different cultures that I would've ordinarily have experienced if I hadn't gone out there to play.

At Tennessee, you spent your collegiate career playing for one of the most legendary coaches in all of basketball history: Pat Summitt. Do you have one particular story or one interaction with her that stands out?

Coach Summitt is the hardest worker I've ever known. She taught me a great deal through her actions, not her words. A funny story, when I first got to Tennessee -- I didn't really understand her because of her deep southern accent. So she would chew me out and I wouldn't have any idea what she said. I'd just know that I was in trouble. But as time went on, we kind of spoke the same language. We'd joke that we started winning when we started understanding each other.

Recently you've been working with the SEC Network and ESPN as a broadcaster. Is that something you can see yourself doing more in the future?

Yeah, this offseason I really just wanted to expose myself to as many thing as possible, to see what I could see myself doing after basketball. I'm really enjoying it -- it's a lot of fun to be a part of the seasons on the sidelines. It's another point of view that I'm learning from. I'm having a lot of fun with it.

Nancy Liebermann and Becky Hammon over the last two years have blazed a trail, becoming the first women to coach on an NBA staff. Is coaching something that you could see in your future someday -- and if so, could that future be in the NBA?

I've always said I never want to coach. That has always been my line. I don't know -- it's a door that I'm leaving open. I love basketball and I definitely want to be around the sport, but I won't say that I want to coach yet.

What about working with a team in a management role, such as a general manager?

Definitely. My brother is a scout for the Orlando Magic, so I've tagged along a couple times and kind of seen what he does, what being in the front office is like. It's very intriguing to see what they do. That's something that I'm interested in.

How often do you play your husband, Shelden Williams, one-on-one, and who is the better player?

We just work out together. We'll joke and play around -- HORSE, around the world, stuff like that. But I can't handle him in the post. I stay away from games I can't win.