If you have ever been subjected to those vaguely racist vibes of being mistaken for someone else of a similar race, these girls know exactly how you feel.

This photo posted by L_Dav_ on reddit features four girls in their yearbook, Alice, Kim, Theresa and Vivian, all with the popular Vietnamese surname Nguyen.

See also: Teacher unleashes Facebook tirade about why she is quitting after 30 years 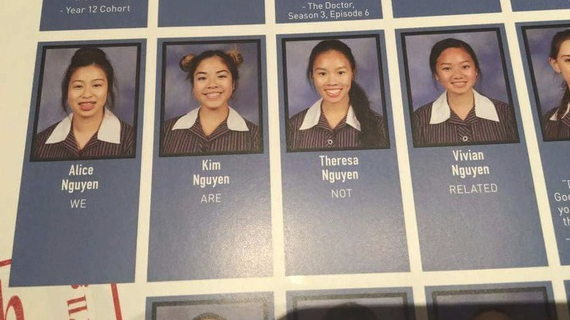 They're hoping to leave a lasting impression on their classmates, with their last hurrah an epic stunt that ought to be applauded throughout the ages.

Did you get that? It says "WE ARE NOT RELATED." Just because they have the same surname, or the same hair colour or whatever, doesn't mean that they're related, OK?

It's the latest in what appears to be a trend of final year high school students to drop the micin their yearbook quotes. Mashable Australia has contacted the person who posted the picture.

Bill Nye
Sheryl Crow
Up Next