Vegans and the dairy-averse were thrilled when Ben & Jerry's announced Wednesday that it's rolling out a line of nondairy "frozen desserts."

"For years, non-dairy fans have been forced to watch ice cream consumers with envy and were unable to participate in a truly indulgent frozen dessert experience," the company said in a press release. "Now the tables have turned."

The company promises that the new desserts will have a similar taste and consistency to regular ice cream, but there is a noticeable difference on the label (aside from being dairy-free): The new ice creams are lower in fat and calories, and, in some cases, have less sugar than their "regular" counterparts. 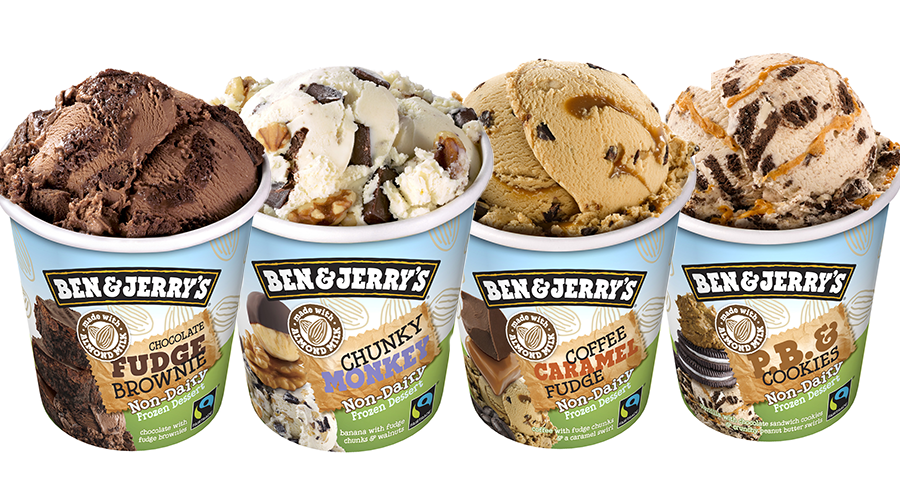 Does that make the new vegan desserts healthier than their regular ice cream cousins? Yes...ish.

Registered dietitian-nutritionist Karen Ansel, coauthor of The Calendar Diet: A Month by Month Guide to Losing Weight While Living Your Life, notes that they do provide "small calorie savings."

New York City registered dietitian Jessica Cording says that some of the ingredients in the new ice creams, such as pea protein and coconut oil, are also good to see. "I appreciate that they're using more real-food ingredients and, in some cases, the sugar count is a lot lower," she says.

But experts also agree that their overall calorie and fat contents don't exactly make them a health food. "This new Ben & Jerry's ice cream line is great for vegans with strong ethical beliefs but for non-vegans who are just trying to watch their calorie, fat, and sugar intake you won't find much luck here" says certified dietitian-nutritionist Lisa Moskovitz, RD, CEO of NY Nutrition Group. Why? Most of the desserts contain more than 250 calories and 25 grams of sugar for a tiny serving, she notes, which won't exactly do wonders for waistline.

SEE ALSO: The Best Midnight Snacks for Whatever You're Craving

But why do the new versions have slightly less calories and fat than their regular counterparts? It's due to the replacement of cow's milk, which naturally contains higher amounts of fat and calories than almond milk and butter.

So if you're going to have ice cream and want to save a little on calories, reaching for the vegan version might not be the worst thing, says Ansel. "An ice cream that uses almond milk instead of cream, like the Ben & Jerry's new nondairy ice creams, can be a slightly better bet," she says. "But you really need to read the labels to know for sure."

If you have ice cream infrequently, Cording recommends reaching for whatever will leave you feeling the most satisfied. But if you're a regular ice cream-eater, she says it's worth adding the vegan version into your rotation once in a while to save a little on fat and calories. However, she points out, "200 calories in a vegan dessert is still more than 150 calories in a non-vegan ice cream from another company."

Ben & Jerry's says its new desserts will be available in stores in mid-February.

More from Glamour:
42 Movies We Can't Wait to See in 2016
30 Sex Tips Every Woman Should Consider by the Time She's 30
8 Workout Moves for a Toned Body in Two Weeks
14 Seriously Cute Hairstyles for Curly Hair
Tags
Read Full Story