If Bernie Sanders wins the Democratic presidential nomination, he'll be the oldest-ever nominee to run for the presidency. By the time the election is held this November, Sanders will be 75 -- three decades older than the youngest contender in the 2016 race: Marco Rubio.

That doesn't mean Sanders doesn't have good company in the history of the Republican and Democratic parties dating back to the presidential election of 1856, which was the first election take place after the Republican Party was established, two years earlier. The oldest-ever presidential nominee for either party was Ronald Reagan, according to the The American Presidency Project. In 1984 at the age of 73, he ran for re-election.

See more from the Sanders campaign:

John McCain became the second-oldest nominee when he ran for president on the Republican ticket at the age of 71, and lost to incumbent Barack Obama eight years ago. 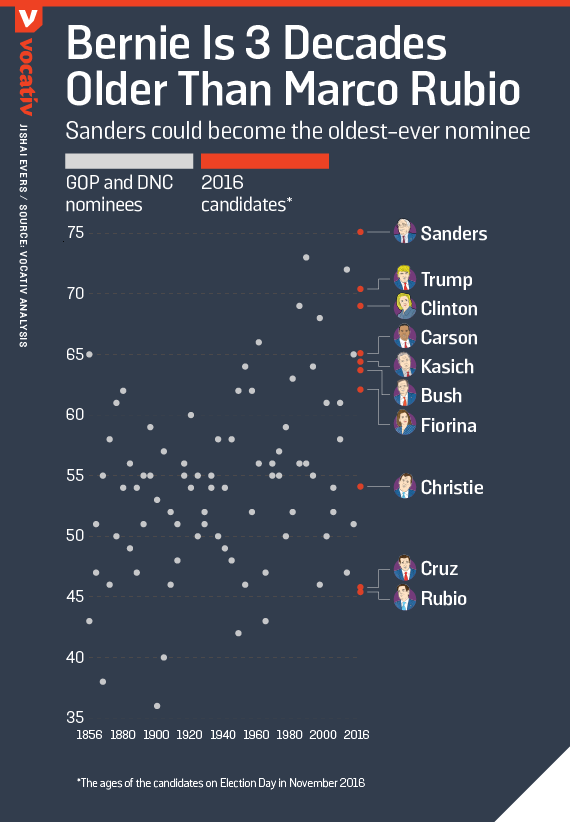 Sanders is 30 years older than Republican candidates Marco Rubio and Ted Cruz, who will be both be 45 during the election in November. Rubio and Cruz are younger than most nominees in election history, although they aren't much younger than Obama was when he ran for his first presidential term in 2008 at the age of 47.

Prior to 1856, the oldest candidates to run for president were 69 years old. They were Charles Pinckney and George Clinton, who both ran in 1808, and James Monroe, in 1820.