Crown-wearing Archie Comics character Jughead Jones has traditionally been more into burgers than romance, and a new comic is about to casually reveal that he is, in fact, asexual. In other words, he's a person who isn't sexually attracted to other people — a kind of sexual identity that's rarely depicted in popular fiction. But when writer Chip Zdarsky and artist Erica Henderson were tasked with helping Archie's companywide reboot of its classic characters, they opted to subtly take a stand and add a new facet to a long-established property. The revelation happens in Jughead No. 4, which hits stands and digital outlets on Wednesday. Archie gave some preview pages to ComicBookResources.com, one of which had the following exchange: 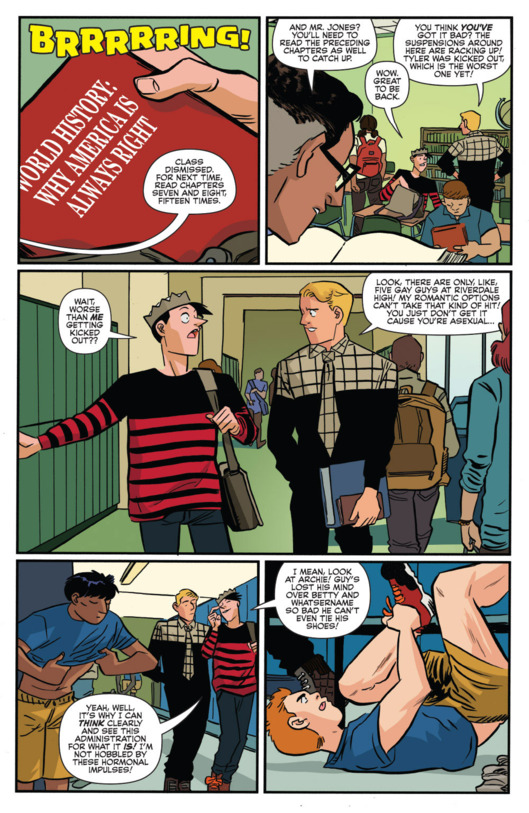 Zdarsky had actually talked about Jughead's asexuality last September during an interview with ComicBook.com. "There have been iterations of Jughead over the decades where he has been interested in girls, so there's room to play around if someone was inclined. For me though, I like an asexual Jughead," he said. "That's more interesting to me than writing him as just being behind everyone developmentally."

The move is being met with a ton of praise from comics fans:

I'M GONNA GO OUT AND BUY A JUGHEAD COMIC

.@ArchieComics representing asexuality with such a high-profile character is brave and wonderful and I love them. https://t.co/0ujXkrk5K4

Cool to see that Jughead has been confirmed as asexual. There are not enough characters like that.

This is yet another boldly interesting move from Archie, a publisher that broke out of decades of stagnation a few years ago by taking steps to wildly reimagine the world of Riverdale. Speaking of which: Could this mean an asexual Jughead on the CW's pilot for Greg Berlanti's Archie-based Riverdale show? One can hope.

Archie comic reveals Jughead is asexual
NEW YORK - UNDATED: *** EXCLUSIVE *** In this undated image, Archie Comics made from wood are on display in New York City. The sculptures do not look anything out of the ordinary, just a pile of comics or newspapers, a box of cash or an open book. However, the artwork is actually wooden sculptures carved out of a single block of pine and painted. No glue or preliminary drawings are used instead just a block of wood. Randall's sculptures are for sale and are exhibited in galleries including The White House. (Photo by Randall Rosenthal / Barcroft Media / Getty Images)
Archie 1
Archie at the ATM
Archie 6
Up Next