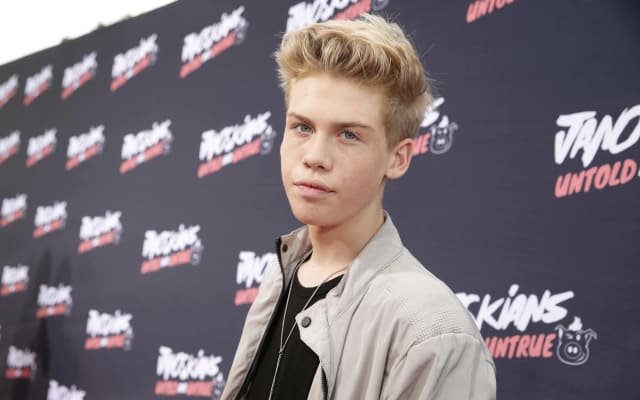 Aidan Alexander may only be 15 years old, but he's well on his way to social media stardom.

That's because Idahoan-turned-Californian has gained the attention of over 1 million followers across Twitter, Instagram, Vine, and Facebook -- and shows no signs of slowing down. But that's really no surprise. After meeting him, it's hard to not to look at Alexander as a voice of his generation. He's funny and charismatic, but also understands real societal issues, becoming a social justice powerhouse in his own right. And on top of it all, he's probably the most well-dressed teenager you will ever meet...ever.

Alexander hasn't always been in this position of social power. Just a few years ago, he was a normal teenager living in Idaho. It wasn't until a teacher approached him and gave him the idea to move to Los Angeles that everything changed. It was out West where he kickstarted his acting career and starred in TV shows like "Granite Flats" and "The Bluffs", started growing his now 1 million strong social media fanbase, and became a lover of all things fashion.

While traveling from his new home of LA to New York City for Men's Fashion Week, we were lucky enough to sit down with Aidan about his rise to social media fame, how he's handling Men's Fashion Week for the first time ever, and his weirdest fan interactions.

And if you want even more Aidan Alexander news, head over to AOL.com at 12 pm and 6 pm EST today for more exclusive videos, photos, and interviews.

which one is paler! 99% of people get this wrong

So I'm curious to know how you started diving into social media. I know you started acting first, so I want to know how you began to combine the two together.
It's funny, I've always been on social media. I've had a few usernames before this one and they're all terribly embarrassing; one of them was called "Cityhydraulics." I'm not sure what that means. But anyways, I went to a performing arts school in Idaho, which is where I was born and raised, and my drama teacher actually was a casting director in LA for 40 some odd years. And after I went through little bit of training, she said I should go out and try the L.A. scene and see if it was something I liked. So I did and I was balancing acting and auditions. It's a lot when you first get there; there's a lot of preparation you have to do to get to where you want to be, whether its classes or shoots. And so as I was getting used to L.A. life, I started meeting a lot of people in the social space and they were like, "I post videos on YouTube" or "I'm an Instagrammer" and I didn't really know then it was a possibility to make a living from it. That's when I really started getting into social media. I just got lucky.

What was like moving from a small town to L.A. at such a young age?
It was such a culture shock, especially coming from Idaho to L.A. If you could imagine the polar opposite of L.A. it would be Idaho. Most of the people there are different from the people in L.A.; they tend to be less open to things or are less out there, and everything tends to be very mellow. But I also think that everyone thinks of moving to L.A. means doing glamorous things or going to the beach everyday, but there's a lot of work that goes in to. Also on a basic level, the temperatures are so different. It gets so cold in Idaho and then feel like 300 degrees in the summer, but L.A. is just one consistent temperature.

What is it like when you go back home? Have you had any weird interactions with people after becoming social media famous?
It's so weird. I was grocery shopping one day at Albertsons with my friend and we were trying to find Kimchi and a ton of kids I went to school came up to me and they were asking me questions like what people I knew, how much money I made, if I consider myself famous. And I was like "Uhhh let me buy my Korean delicacy and leave." And those are all people that I had completely normal conversations with when I went to school. So it's interesting to see how the spotlight really effects me and how people think it effects me. The connotation associated with any type of attention on people -- I don't necessarily want to say fame -- and the lifestyle associated with people in L.A. is much different to what people actually think it is.


"It's interesting to see how the spotlight really effects me and how people think it effects me." Aidan Alexander

Speaking about relationships, what do you think is the dynamic between you and your fans?
I think my fans really are my friends. They're all so similar to me -- I think I've been lucky enough to attract a similar fan base to my personality. I also feel like I can (mostly) Tweet anything, so I'm very lucky.

'The Bluffs' is currently in post-production now. How was filming it?
It was the first show I did that was teen-oriented, so it's nice that I was involved in a project that I knew I would want to watch and that other teens would want to watch. And overall it was a really fun experience.

Was there a favorite moment you had on set?
Yeah! So there was this party scene and we had a lot to shoot, but it was so fun because we were at this house in the Hills and we had a ton of extras come in. And we just partied around the house and acting like real teenagers doing some rowdy things.

Since it is Men's Fashion Week, how did you first get into fashion?
This makes me seem so arrogant, but in Idaho I feel like there were very few people who were into fashion in the same way people are in Los Angeles. And when I moved here, I was like "Finally!" I could wear what I wanted to wear and experiment with styles because its more open. And that gave me more confidence and it was when I started realizing that it was something I liked. I really just love clothes and dressing well, and now I'm at Fashion Week and I get to see all these shows and start applying what I see to my own wardrobe.


Is there a certain style you tend to gravitate towards?
I always joke about it and I say "homeless chic." I just like to wear flannels, jeans, and boots and then I'm like "My fit is sick." But lately I've been into more vintage styles, so I've been trying to incorporate more leather jackets, band tees, and light-wash jeans. Really love 90s-esque clothing.


YouShouldKnow is a feature that showcases up-and-coming social stars. To see more of past interviews, click here. And come back at 12 pm EST for more exclusive Aidan Alexander features, including his favorite pick-up-lines just in time for Valentine's Day.