Aidan Alexander is a passionate feminist, and thinks you should be too 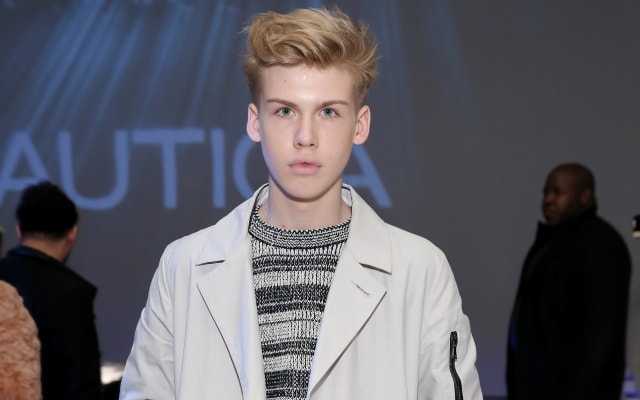 For starters, he has over 1 million avid fans who are obsessed with his daily Tweets, Vines, Instagrams, and Facebook posts. And while his audience mainly follows him for his pictures around Los Angeles, or his videos that resonate with the hilarity of everyday life, or even his on-screen cameos from his blossoming acting career, they also get a glimpse of the person behind the camera -- the real teenager who has frank opinions about pressing social issues.

Most of Aidan's fans probably already know that he is a proponent of feminism; Aidan uses his social media presence and platform to share his take on gender issues. But what they might not know is the story behind his beliefs.

Ahead, we spoke in-depth with the social star about what it means to be a feminist and why he believes every man -- regardless of age -- should be one too.

And if you want even more Aidan Alexander news, head over to AOL.com to see the rest of his exclusive videos, photos, and interviews. ​


So I've read that you consider yourself a feminist which I think is so interesting! I'd love to hear more about why that is.
This is so cool! I never get asked about this, it's always just like "What's your favorite color?" Haha, but it's always been something that I'm super passionate about, but when I was younger I really didn't know the name for it. I just felt it was really unfair in the media and in my own personal life, especially in Idaho when things can be a little bit more strict, seeing very stereotypical depictions of women. You know, like those photos that say "Women should only be in the kitchen" that people would post on Facebook. I always took offense to those. Even though I personally couldn't relate, just because I've never been in that position where I've experienced those struggles, I could empathize. And this is when I was younger and didn't realize there was a specific label to it. And I have seen a lot of social media people talk about it, but then not want to go into the issues deeply. I think for myself, I've really just been trying to educate myself on is feminism as a whole, and not just feminism on certain issues. I feel like a lot of people who label themselves a feminist really only cater to white, straight women's feminist issues and it almost excludes people in a term that's really all about inclusion and equality. So it was really important for me to find out about each person who is struggling, whether they are a person of color or a transgender woman, and trying to find a way to inform myself about feminism as a whole.

There's also a lot of people in the social space who tend to overdo feminism as well, and they react strongly to certain things. I saw somebody post one time of a bathroom sign of a woman and they were saying "We're teaching women you have to to look like this sign" and I was thinking by that logic we'd have to ban stick figures because they look too skinny. But in the same sense, it's really important for people to be aware of what's going around them and aware how what they say can effect somebody else.


"It's really important for people to be aware of what's going around them and aware how what they say can effect somebody else. " Aidan Alexander

When I first started getting into it and trying to teach myself, there were certain aspects about the wage gap that everyone knows on the surface. But when I delved deeper there was other issues, like transgender women being murdered and nobody wants to talk about it because the media deems it "too intense." But that's not feminism. If you're only covering the top layer like the wage gap -- which I do believe is very important -- you're missing out on other factors. So if women make 77 cents to a man's dollar, there are Hispanic or Indian women making 50 cents. But nobody really wants to talk about that.


But I do bring it up sometimes on Twitter, not really planned but its more of a reaction to things I see.

That's awesome! Could you give us an example?
I tweeted a while ago how people were excusing boy's attitudes or misogyny because they are young and they don't know any better. But I'm young, I'm a teenage boy, and I'm probably the same age these boy are starting to develop these sexist thoughts. So I don't find that an excuse -- I don't find being young an excuse to treat other people poorly. And I talked about that and said we have to teach our men that its not okay. I feel like there's so many people in the social space who try to blow off and justify their actions as being a result of "too young" whether that deals with feminism or other topics, and I just try to call that out. Me and my friends who are males and all young don't treat people like that. I'm really just trying to call out the societal bluff.

Are there any other issues that your passionate about?
Yeah! I'm actually working a marine biology project about animals that are going endangered due to oil spills and trash in the ocean. We had a dinner in LA about it a few days ago and I found out that by 2050 the trash in the ocean will weigh more than the fish in the ocean and that was insane to me. I also tweet about this a lot, but I'm really against poaching and illegal hunting. And when Cecil the lion died, I just freaked out and went on a huge Twitter rant. My whole team was like, "Aidan, you can stop now" and I was like "No, no no no."

YouShouldKnow is a feature that showcases up-and-coming social stars. To see more of past interviews, click here. ​