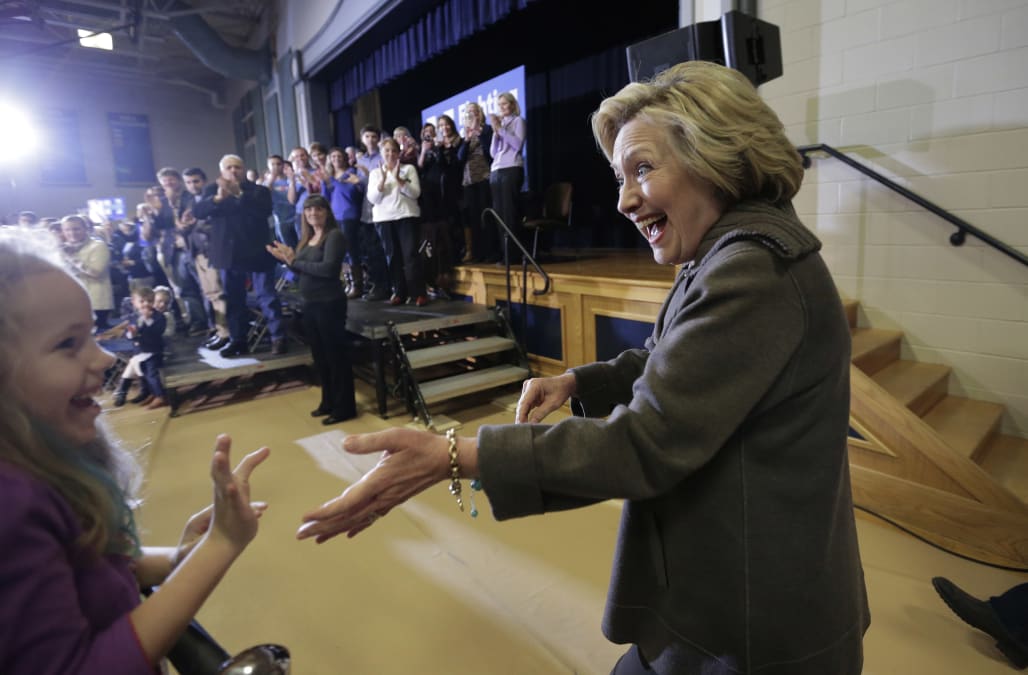 DERRY, New Hampshire — A handful of young children stole the show at a Hillary Clinton town hall on Sunday, asking the Democratic front-runner poignant questions that got an emotional response from both the audience and Clinton herself.

After an hour-long stump speech, Clinton took questions from the audience gathered in the gymnasium at Gilbert R. Hood middle school. Three of those questions came from young children, who asked about everything from lifting folks out of poverty to helping children in foster care.
See also: 3 things we learned from the latest Hillary Clinton email dump
The most emotional moment of the afternoon came from a young girl who said she is in foster care because of her mother's substance abuse.

Powerful moment when a girl whose mother died of a drug overdose asks Clinton a question pic.twitter.com/h2CkqRzHiN

Clad in a pink-and-gray-striped sweater, the little girl broke into tears as she asked Clinton for her ideas to help other children in foster care like herself.

"First of all, I'm really sorry that happened to you," Clinton said, her voice low and with concern. "I'm very happy to hear you have somebody taking care of you that you feel that positive about. And I thank her for taking care of you."

Clinton went on to say she wants to get ideas from children in foster care, and adults who foster children, about what things would help their situations.

"I feel strongly we've got to improve our foster care system, because when children come to foster care they become all of our children," Clinton said. "They should be given all of our love and support when they face a situation like this," Clinton said. "Thank you for raising it."
See also: 'Schlonged': Trump's latest attacks on Hillary Clinton take a sexist turn
Shortly after, Clinton called on a little girl who asked what ideas Clinton had to help the poor.The little girl told Clinton at her birthday parties, she donates toys to the less fortunate, rather than taking presents for herself, which delighted the crowd.

Clinton responded with some of her ideas, including profit-sharing at companies and fixing low-income housing to bring living costs down.

"But it really starts with, No. 1, a good job and the training and skills to get and keep that good job and raising incomes so people are rewarded for their work," Clinton said.

The event was Clinton's first of three town hall meetings in the Granite State, and marks her first trip to the home of first-in-the-nation primary in 2016.More than 700 people packed into the middle school gym to hear her stump speech in Derry, one of the largest towns in New Hampshire located near the state's southern border.

"It's a new year, it's a year where we get to do what our democracy asks of us and to decide who our next president and commander in chief will be," Clinton said. "I'm asking for your support in the primary to be that president, to get up every single day and stand up for you."

Clinton explained her policy stances on everything from guns to foreign policy. But she also peppered her speech with jokes and stories that drew laughter from the crowd.

On her potential Republican opponents, Clinton said they have "a particular fixation on blaming President Obama and me for everything that happens in the world."

She also told the story about the time she sent every GOP presidential contender a copy of her book, Hard Choices, to inform them of how to make foreign policy plans.

"There's so many of them you can have a book club," Clinton joked about the size of the Republican field, which has now winnowed to 11 candidates.

See the slideshow below for more photos of Hillary Clinton:


And in response to a question about how she'd keep in touch with voters after being elected to the White House, Clinton said she would continue to host town halls like the one on Sunday in Derry to meet folks. And she lamented the high security that prevented presidents from interacting with every-day Americans.

"When I was first lady, I used to sneak out of the White House with a baseball cap and sunglasses and walk on the mall," Clinton said, referring to the National Mall filled with monuments right behind the White House. "And people would say you look like Hillary Clinton."

.@HillaryClinton says when she was 1st lady she used to sneak out of the WH in a baseball hat and sunglasses and take walks.

With a little more than a month before voters here head to the polls in the Feb. 9 primary in New Hampshire, Clinton trails her chief rival, Sen. Bernie Sanders, by a 4-point margin, according to the RealClearPolitics polling average of the state.

"If you care about any of these issues, please come out and vote on Feb. 9," Clinton said to the audience at the end of her stump speech. "Make sure you are part of the solution and part of the future. And please, join us."

Have something to add to this story? Share it in the comments.
Tags
Read Full Story