Thursdays used to be a powerhouse day when it came to hit sitcoms. But not anymore.

Tuesday nights have now dethroned the once coveted comedic day of the week, and it's all thanks to FOX's incredible lineup. Starting January 5th it will include "New Girl", "Grandfathered", and "Brooklyn Nine-Nine." But the real highlight is the show that caps off the night, "Grinder." When you tune in to the program, which follows the antics of Robe Lowe's actor-turned-lawyer persona alongside his brother Fred Savage, one thing is certain: big laughs are guaranteed.

You can blame our nightly fits of contagious LOLs on Hana Hayes. The young star is quickly getting onto everyone's radar, after starring in the show as Fred Savage's off-beat daughter, Lizzie.

But don't let Hayes's age fool you into thinking that this is her first rodeo when it comes to acting. The actress has been quickly racking up parts in television series, short films, and even a video games over the past few years. At just 16, Hayes has already garnered an impressive resume, including roles on "Law and Order: Special Victim's Unit" and "Criminal Minds." And if that wasn't enough, she's also amassed a loyal following on Instagram -- over 216,000 fans to be exact.

Between her social media stardom and her undeniable on-screen charisma, Hayes is sure to be a household name very soon. It's only fitting that we spoke to the woman of the hour herself. Ahead, Hana dishes on her start in the business, what happens behind-the-scene on "Grinder", and her incredible relationships with her Instagram fans. 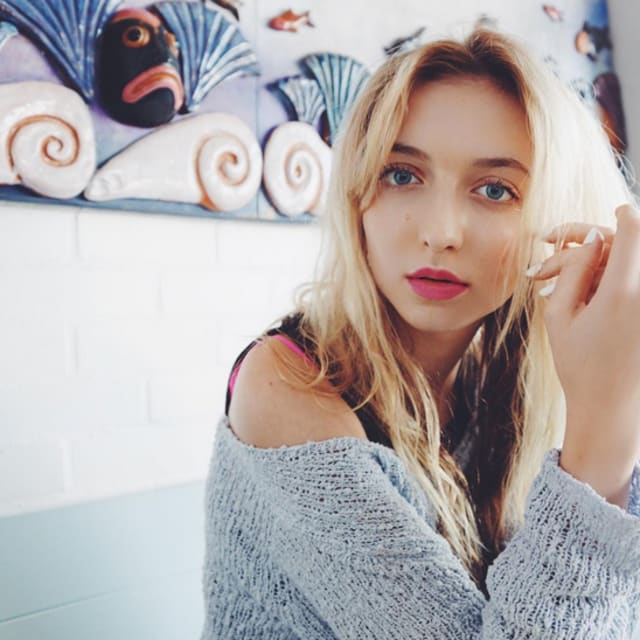 How did you get into acting?
I started doing plays when I was little and at the time, it was my favorite thing. I would sit in the wing and tell my mom that I just couldn't wait to go out; the stage was just amazing! Then I entered myself into a small contest, won a little monologue award, and then moved out to LA for five months -- which soon turned into 5 years! After some time back home, I moved back to LA for "Grinder."

What was it like when you got the call for Grinder?
Oh my gosh, I was sobbing! Usually when you are auditioning for a series regular, you have to audition, and then you have a call back -- sometimes it could be up to 10 callbacks. And for this, I just sent in a self-recorded tape at 11pm, auditioning a for the role of a chubby promiscuous red-head. I thought to myself, "They got me nailed, that's me!" So when I was auditioning, my mom was laughing so hard because she was playing my boyfriend and was like "I'm not saying this stuff."

Anyway, we sent it in and then two days later I got a call saying that they were sending me and one other girl to the network to tape and that I was tentatively leaving at 8pm that night, so I had to pack my bags. They ended up calling me an hour before I got on the plane and said I booked it. i just started sobbing; I called my best friend who is also an actress and cried! It was just amazing.

What's the energy like on a set like that?
It's wonderful, honestly, everyone is amazing. There is zero ego with anyone. Rob and Fred are so down to earth. We are all there to do a job, but we're also there to have fun. Usually between sets, everyone leaves and goes on their phones, or whatever, but we all stay together, laughing and making jokes. Sometimes, Rob will make Fred laugh so hard that he's sobbing and we can't even get through a take. And then everyone else starting laughing uncontrollably too.


"We are all there to do a job, but we're also there to have fun." Hana Hayes

Would who you say is your biggest role model in the industry?
Because of my career in comedy, I love Sarah Hyland. I think what she is doing with her career is amazing. Amanda Seyfried is great too! Also Meryl Streep, obliviously, but she is a typical answer. But I think my favorite actor of all time is Tom Hanks; the way he transforms himself for roles is incredible.

What would be your dream role?
I love drama, so it would be an honor to work with Tom Hanks and Amanda Seyfried. I love drama and I would love to get back into that genre.

My friend just sent this to me, so cool @TheLastofUsGamepic.twitter.com/JIduilMGXZ

What do you do in your spare time? Any favorite TV shows?
I love "Crazy Ex-Girlfriend", "Jane the Virgin," "Blindspot" and, "Quantico." Monday nights are great because I get a script from "Grinder" and then get to watch Blindspot, it's the perfect combination. But I also love to bake, so that's how I really unwind in my spare time.

Favorite thing about fans on social media?
They are so dedicated. "The Grinder" is nominated for a People's Choice Award and girls are sending me their screen shots of their votes for the show and their search history. It's already at about 2,000 votes and I'm like "You guys are amazing!" They are so sweet and I love connecting with them. When they're also going through difficult times and they DM me; it's nice to know I can connect with them personally as well.

Favorite Social Media Platform?
Ohhh...Instagram! I am kind of an Instagram addict. I post at least once a day, but sometimes I get crazy.

What would you say is up next for you?
Hopefully season 2!

To see more on the cast of "Grinder", scroll through the gallery below: