Winter Storm Goliath will spread a swath of snow and ice accompanied by strong winds through the Midwest Monday and then impact parts of the Northeast Monday night through Tuesday.

Parts of 11 states are under winter storm warnings from north Texas to Michigan as of early Monday morning. Winter weather advisories and winter storm watches are also posted in other areas, including parts of the Northeast.

See photos of winter weather across the U.S.: 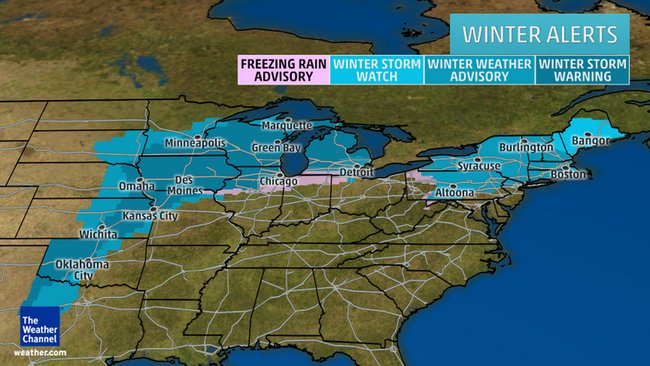 In addition to snow, the warm side of Goliath will continue to produce severe thunderstorms and flooding rainfall into Monday. For more on that story, click the link below.

Saturday night into Sunday, Goliath brought crippling blizzard conditions to the southern High Plains where drifts up to 10 feet high were reported. For more on the major impacts from Goliath, click the link below for a full report. 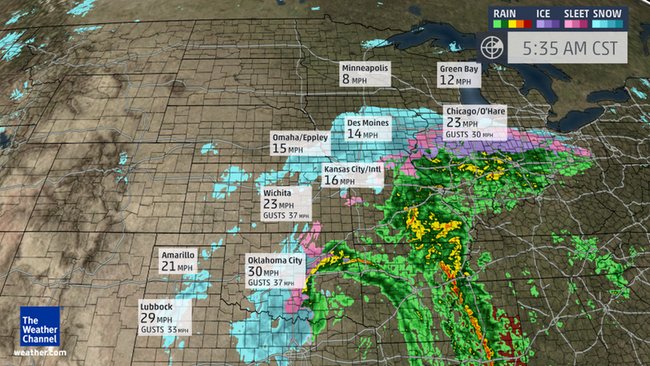 Below is an overview of the timing for Winter Storm Goliath followed by the snow accumulation forecast.

The area of low pressure will push towards the Midwest, spreading snow, sleet and freezing rain in a swath from Oklahoma to parts of Minnesota, Wisconsin, Michigan, northern Indiana and northern Ohio. Strong winds gusting to 40 mph will accompany the snow in parts of the Midwest, causing reduced visibility and poor travel conditions in some areas.

A narrow zone across northern Illinois, northern Indiana, southern Michigan and northwest Ohio could see some significant ice accumulations. This includes Chicago where freezing rain is expected into early Monday afternoon (away from the lake) before changing to rain later Monday. The ice combined with strong winds could lead to some broken tree limbs or power outages.

A wintry mix may also develop as far east as western Pennsylvania and southwest New York by afternoon.

Monday night, a thin area of snow will spread from western, central and Upstate New York into western New England before dawn.

The snow in much of central and western New York, as well as Pennsylvania will only be brief, changing to sleet and freezing rain overnight as it spreads into northern New Jersey.The wintry weather should remain to the northwest of the five boroughs of New York City, though a brief period of sleet or freezing rain can't be ruled out. Boston could see some minor accumulating snow overnight Monday night.

Meanwhile, a swath of snow will continue spreading north in the Upper Midwest Monday night from eastern South Dakota and eastern Nebraska to Wisconsin and Upper Michigan. Sleet or freezing rain will mix in over the western Great Lakes from parts of southeast Wisconsin to Lower Michigan, with precipitation changing to rain in the southern Great Lakes overnight. 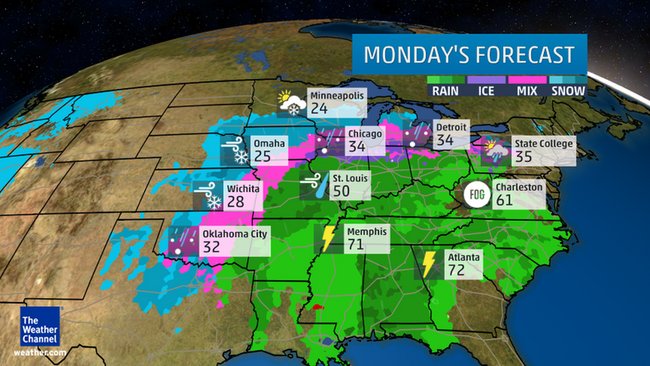 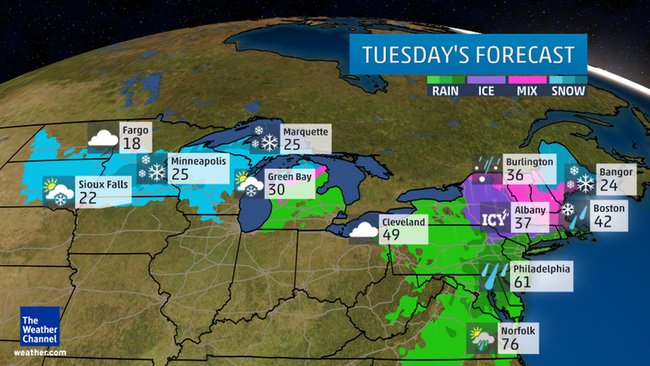 A swath of 5 to 12 inches of snow is forecast from northeast Kansas and eastern Nebraska to Iowa, southeast South Dakota, southern Minnesota, Wisconsin (lighter in southeast) and northern Michigan.

In addition to the snow, some additional ice accumulations could be locally significant from the eastern Texas panhandle into parts of west-central Oklahoma. 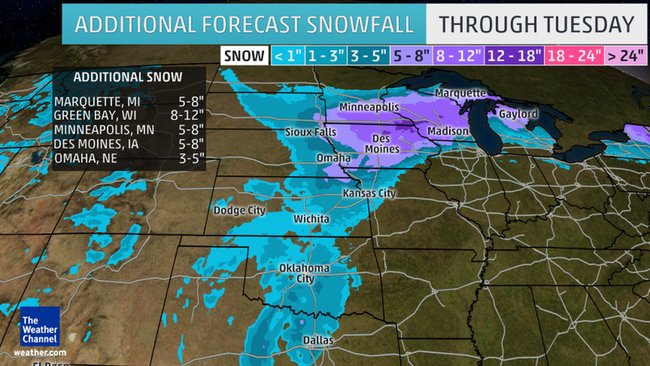 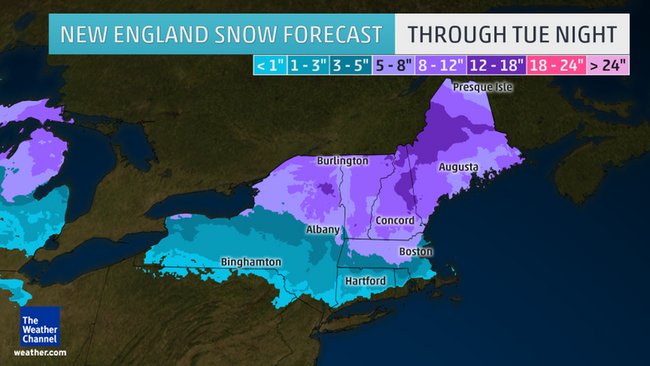 Here is a recap of Sunday's blizzard conditions followed by a listing of some of the greatest snowfall amounts by state.

Snow drifts of up to 10 feet were reported in several eastern New Mexico and west Texas counties, where motorists were reportedly stranded due to the severe blizzard conditions.

Three feet of snow fell at Ski Apache in southeast New Mexico. Goliath has dumped up to an estimated 30 inches of snow on Cloudcroft, New Mexico, where strong winds caused power outages as well. El Paso International Airport picked up 8.1 inches of snow, which exceeds their average annual snowfall of 5.5 inches. Parts of the Midland, Texas, metro area picked up 7 inches of snow from Goliath.

Thundersnow was observed in parts of west Texas on early Sunday afternoon, including in San Angelo. Light snow and sleet even fell for a few hours Sunday afternoon in Del Rio, Texas, where the last accumulating snow fell in February 2012.

Texas
Snow:
- Whiteout conditions in Plains, Farwell, Hale Center and Littlefield and other locations.
- 18 inches in Friona
- 9.2 inches at Lubbock NWS office
- 8.1 inches at El Paso International Airport (up to 10 inches northwest of the city)
- 8 inches in Midland