Australian actress Teresa Palmer is one of the stars of the new "Point Break," opening Friday. She's hella talented. She's hella gorgeous. And here's what you need to know about her.

1. She had not seen the 1991 original, starring Patrick Swayze and Keanu Reeves, until the last minute. "I hadn't seen it until the night before we started shooting. I'd heard it was an amazing cult classic and there was a lot of controversy surrounding a remake of the movie. I did not want to remake the movie. It was so perfect as it was. I'm glad that ours was a complete reinvisioning. It's loosely based on the original. The spirituality and the heart are there but the characters are radically different. It seems like a new movie," says Palmer. 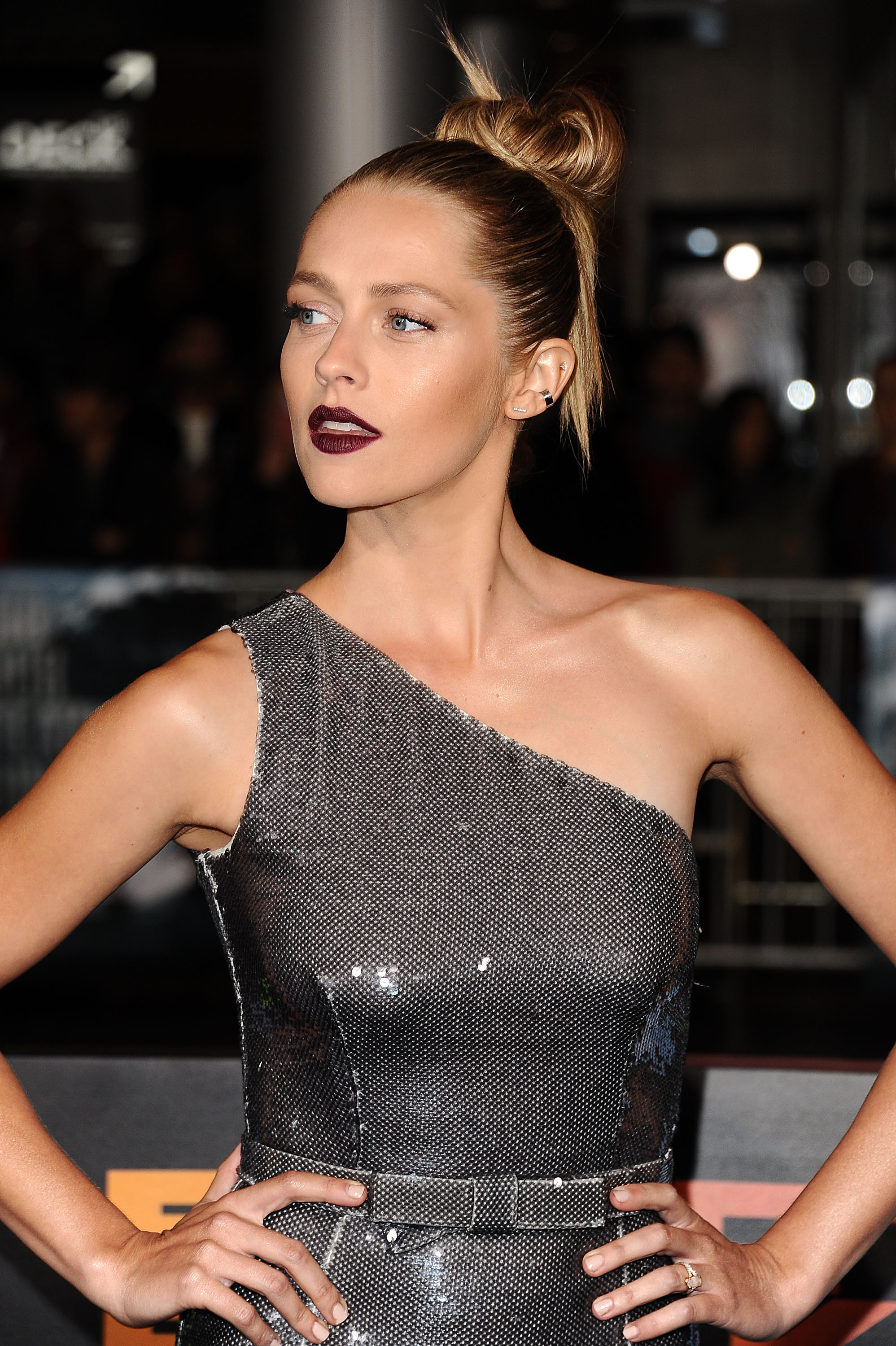 2. Her son is named Bohdi -- just like the character played by Swayze. "It's funny that he shares the same name. All these things align. It's where I'm supposed to be headed," she says.

3. She sees a lot of herself in the character she embodies. "I play Samsara. She's the heart of the group of these eco-terrorists. She's very passionate about her cause. She won't stop at anything to see through what they're wanting to do. She's deeply rooted in her spirituality. She's earthy and grounded and brave," says Palmer. "It's a huge part of who I am. I'm really excited about exploring myself in that way. I wanted to inject my own belief system into Samsara." 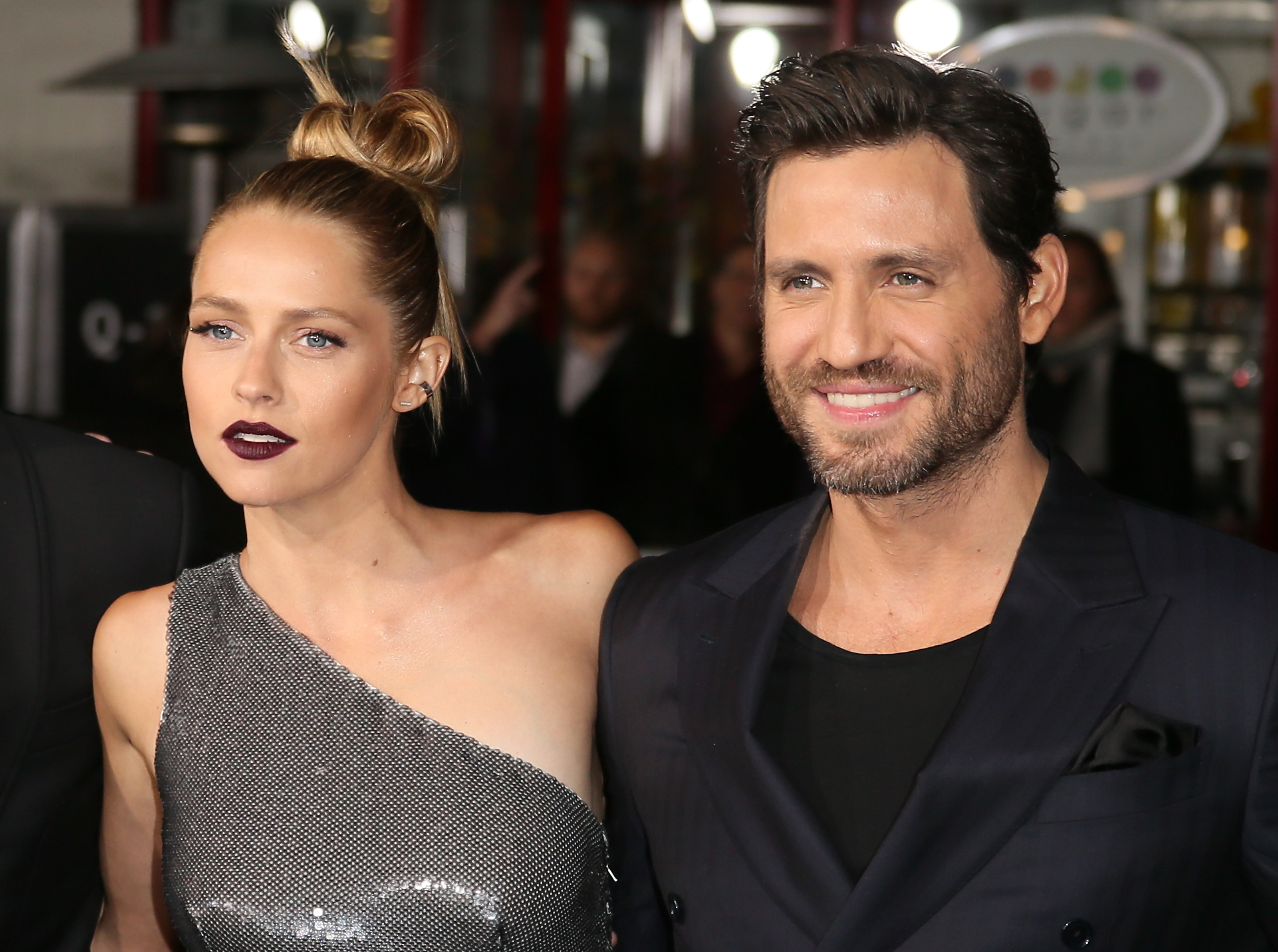 4. She killed it in the second-skin Prada dress she wore to the film's LA premiere -- and she had no second thoughts about it. "I loved it. It was Prada and it was the first dress I tried on. I got in the day before the premiere. The day I arrived, I filmed one last scene on a movie and I fell asleep during the fitting. It was the first one we tried one. Boom. Perfection. Thank you, universe," says Palmer.

5. Even though "Point Break" is all about living on the edge, Palmer isn't quite like that in real life. "I'm sort of a risk-taker. I used to be much more of one before I had a child, but my life is much more important now that I am a mother. I didn't do my own stunts on 'Point Break' because I had a four-month-old. I used to ride Ducati motorbikes when I was childless. I played every single sport you can imagine," she says.

OnlyOnAOL: Five things you need to know about 'Point Break' star ​Teresa Palmer
Patrick Swayze almost didn't get the part of Johnny in 'Dirty Dancing' -- and for a few reasons too. According to Moviefone, Swayze was a bit older than the character was supposed to be at 34. Yet, maybe more importantly, Jennifer Grey (aka Baby) wasn't too fond of everyone else's heartthrob as a result of their work together on 1984's 'Red Dawn.' Nonetheless, the 'volatile' chemistry the two shared while dancing proved too much to pass up and the result was clearly timeless.

He once starred in a really ridiculous TV commercial for Pabst Blue Ribbon beer that was inspired by 'Saturday Night Fever.'

... we're not kidding, you can watch it here: Patrick Swayze PBR Ad

Patrick got the role of Sam Wheat in 'Ghost' because the film's writer, Bruce Joel Rubin, saw an interview in which Swayze burst into tears after his father was brought up. He thought if a macho guy like Patrick could break into tears like that, he'd be perfect for the part. [Collective swoon ...]

Speaking of 'Ghost,' Patrick Swayze himself considers the pottery scene to be one of the sexiest things he's ever filmed.

He recalled in his autobiography: "It was pretty sexy playing in all that clay, so all we had to do was go with it, let our imaginations run wild, and then touch each other's arms for the sparks to fly."

In January of 2012, stories in the media starting popping up about Patrick being hospitalized. The only problem? He died in September of 2009.

A site called The Mandela Effect muses that there may be an alternate universe in which Swayze recovered from cancer and lived on ... or else people got confused by this Fox News headline.

He's a cult hero in hop-hop! In fact, Genius.com (formerly Rap Genius) lists 389 results containing the term 'Swayze' (as opposed to the 171 entries featuring the term 'Kurt Russell' -- take that Kurt!).
And speaking of sexy, Swayze was People Magazine's 'Sexiest Man Alive' in 1991
Back in the day (high school that is) he also learned to hold his own in a fight. After getting jumped by five bullies at school, Swayze's dad got the school coach to yank all five kids out of class to fight Patrick one-on-one (what?!) -- and you better bet that Patrick downed them all in succession.
Nearly every time the movie 'Road House' plays on TV, Bill Murray (or one of 'his idiot brothers') calls Kelly Lynch's house to tell her husband that Patrick Swayze is having currently relations with his wife in a hilarious ongoing prank revealed by Lynch to the A.V. Club.

On June 1, 2000 Swayze was flying his Cessna 414A plane from Van Nuys, CA to Las Vegas, NM when he lost pressure and had to make an emergency landing on a suburban street in Prescott Valley, AZ.

There is some debate as to whether he was drunk or fumes from his cigarette smoke caused him to suffer from hypoxia -- but either way he expertly landed his plane under the influence of something. Irresponsible? Yep. Impressive nonetheless? Indeed.

Patrick was happily married to his high school sweetheart Lisa Niemi for over 30 years -- until the day he died.
On the set of 'Red Dawn,' Swayze liked to put small M60 explosives in the toilet of director John Milius and detonate them when he was using the restroom for fun. Lesson learned: Patrick Swayze didn't always partake in prank wars ... but he always won.
That majestic man to the left of Patrick is his brother (who you probably didn't even know existed), Don. Don Swayze has made appearances in everything from 'Matlock' and 'Murder, She Wrote' to 'It's Always Sunny In Philadelphia' and 'CSI.'
Up Next