Facebook solved the mystery of a golden antique that bewildered experts

No, this is not a rolling pin from space.

For months, the Israel Antiquities Authority been stumped by a mysterious gold object that was discovered at a cemetery in Jerusalem.

The independent Israeli governmental authority had been so confounded in the months since its discovery, according to NBC News, that they turned to its Facebook page on Tuesday in hopes that someone would recognize the object.

Coated in 24-carat gold, the solid metal object had undergone X-rays and was even subject to a controlled explosion by a bomb squad, due to fears it may have been an explosive. 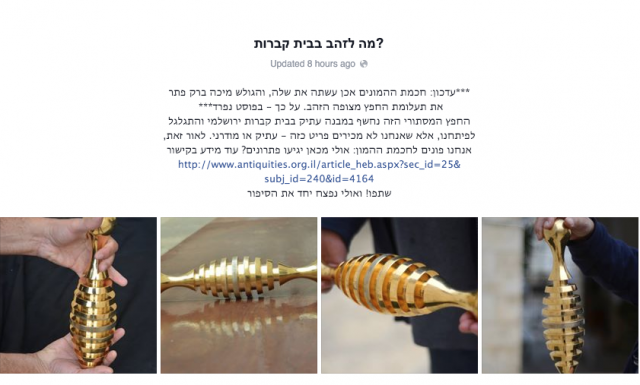 The wisdom of crowd-sourcing provided an answer: The group credited Micah Barak, an Italian man, with providing the answer. As it turns out, the cylindrical gold tool is an "Isis Beamer" (no, not that ISIS) — and you can buy one online.

Named after the Egyptian goddess of medicine, magic and nature, the device is intended to "harmonize geopathic and electromagnetic radiation fields," according to the product description (meaning it's meant to maintain energy harmony). Apparently, it's also durable enough to survive a bomb squad's controlled explosion.

The mystery of why the object was in a cemetery is one that has yet to be solved.

Facebook solved the mystery of a golden antique that bewildered experts
Photo: Israel Antiquities Authority/Facebook
Up Next