Recapping the best and worst of the NFL in 2015

Recapping the best and worst of the NFL in 2015
Sergio Brown #38 of the Jacksonville Jaguars takes the field prior to a preseason game against the Pittsburgh Steelers at EverBank Field on August 14, 2015 in Jacksonville, Florida. (Photo by Stacy Revere/Getty Images)
Odell Beckham #13 of the New York Giants catches a touchdown in front of Jairus Byrd #31 of the New Orleans Saints during the third quarter of a game at the Mercedes-Benz Superdome on November 1, 2015 in New Orleans, Louisiana. (Photo by Sean Gardner/Getty Images)
PHILADELPHIA, PA - SEPTEMBER 20: DeMarco Murray #29 of the Philadelphia Eagles leaps over Brandon Carr #39 of the Dallas Cowboys in the third quarter on September 20, 2014 at Lincoln Financial Field in Philadelphia, Pennsylvania.The Dallas Cowboys defeated the Philadelphia Eagles 20-10. (Photo by Elsa/Getty Images)
ORCHARD PARK, NY - SEPTEMBER 20: Julian Edelman #11 of the New England Patriots scores a touchdown during NFL game action as Aaron Williams #23 of the Buffalo Bills tries to make the tackle at Ralph Wilson Stadium on September 20, 2015 in Orchard Park, New York. (Photo by Tom Szczerbowski/Getty Images)
GLENDALE, AZ - FEBRUARY 01: Jermaine Kearse #15 of the Seattle Seahawks makes a catch against Malcolm Butler #21 of the New England Patriots in the fourth quarter during Super Bowl XLIX at University of Phoenix Stadium on February 1, 2015 in Glendale, Arizona. (Photo by Mike Ehrmann/Getty Images)
OAKLAND, CA - AUGUST 30: Taiwan Jones #22 of the Oakland Raiders tries to catch the ball in the endzone while covered by Chris Clemons #29 of the Arizona Cardinals at O.co Coliseum on August 30, 2015 in Oakland, California. The play was called back for a penalty and did not count. (Photo by Ezra Shaw/Getty Images)
ST. LOUIS, MO - SEPTEMBER 27: Antonio Brown #84 of the Pittsburgh Steelers is tackled by Janoris Jenkins #21 of the St. Louis Rams after making a catch in the first quarter at the Edward Jones Dome on September 27, 2015 in St. Louis, Missouri. (Photo by Dilip Vishwanat/Getty Images)
PITTSBURGH, PA - DECEMBER 6: Jesse James #81 of the Pittsburgh Steelers is tackled by Darius Butler #20 (not pictured) of the Indianapolis Colts as Mike Adams #29 of the Indianapolis Colts defends in the first quarter of the game at Heinz Field on December 6, 2015 in Pittsburgh, Pennsylvania. (Photo by Justin Aller/Getty Images)
GREEN BAY, WI - OCTOBER 11: Ty Montgomery #88 of the Green Bay Packers does the 'Lambeau Leap' after running in a 31 yard touchdown against the St. Louis Rams in the first quarter at Lambeau Field on October 11, 2015 in Green Bay, Wisconsin. (Photo by Jonathan Daniel/Getty Images)
SEATTLE, WA - JANUARY 18: The Green Bay Packers huddle in the fourth quarter of the 2015 NFC Championship game against the Seattle Seahawks at CenturyLink Field on January 18, 2015 in Seattle, Washington. (Photo by Ronald Martinez/Getty Images)
LANDOVER, MD - NOVEMBER 15: The Washington Redskins are introduced before playing the New Orleans Saints at FedExField on November 15, 2015 in Landover, Maryland. The Washington Redskins won, 47-14. (Photo by Patrick Smith/Getty Images)
TAMPA, FL - NOVEMBER 08: Jameis Winston #3 of the Tampa Bay Buccaneers drops back during a game against the New York Giants at Raymond James Stadium on November 8, 2015 in Tampa, Florida. (Photo by Mike Ehrmann/Getty Images)
DETROIT MI - DECEMBER 3: Richard Rodgers #82 of the Green Bay Packers catches a fourth quarter touchdown to win the game 27-23 over the Detroit Lions on December 3 2015 at Ford Field in Detroit, Michigan. (Photo by Leon Halip/Getty Images)
NEW ORLEANS, LA - OCTOBER 15: Benjamin Watson #82 of the New Orleans Saints scores a touchdown during the third quarter of a game against the Atlanta Falcons at the Mercedes-Benz Superdome on October 15, 2015 in New Orleans, Louisiana. (Photo by Chris Graythen/Getty Images)
EAST RUTHERFORD, NJ - NOVEMBER 08: Brandon Marshall #15 of the New York Jets attempts to catch a pass under pressure from Telvin Smith #50 and Johnathan Cyprien #37 of the Jacksonville Jaguars during the second quarter at MetLife Stadium on November 8, 2015 in East Rutherford, New Jersey. (Photo by Al Bello/Getty Images)
CLEVELAND, OH - OCTOBER 18: Strong safety David Bruton #30 of the Denver Broncos and tight end Gary Barnidge #82 of the Cleveland Browns fight for a last second throw into the end zone to end the first half at FirstEnergy Stadium on October 18, 2015 in Cleveland, Ohio. (Photo by Jason Miller/Getty Images)
ARLINGTON, TX - OCTOBER 11: Wide receiver Julian Edelman #11 of the New England Patriots dives into the endzone to score on a 59 yard touchdown reception against the Dallas Cowboys during the second half of the NFL game at AT&T Stadium on October 11, 2015 in Arlington, Texas. (Photo by Christian Petersen/Getty Images)
GLENDALE, AZ - FEBRUARY 01: Tom Brady #12 of the New England Patriots is surrounded by the media after defeating the Seattle Seahawks 28-24 during Super Bowl XLIX at University of Phoenix Stadium on February 1, 2015 in Glendale, Arizona. (Photo by Tom Pennington/Getty Images)
Up Next

Best NFL photos of the year

With 2015 in the books, it's time to take a look at the highlights and lowlights of this calendar year in the NFL.

The New England Patriots grabbed headlines both on and off the field all year long, but a number of storylines have grown prominent over recent months -- like Cam Newton and the Carolina Panthers' undefeated stretch this season.

Plenty of focus has rightfully been focused on the Seahawks' bizarre decision not to run the ball with Marshawn Lynch at the goal line in the closing minutes of the Super Bowl. But without Malcom Butler's incredible interception through traffic, New England may not win that game.

There's a chance -- a slim chance -- that you predicted the Carolina Panthers to clinch a playoff berth at some point this year. But to think they'd be undefeated with two games left to play in the regular season, and that the entire NFC playoffs would have to go through Bank of America stadium? Nonsense.

This was far from the commish's worst blunder of 2015, but was certainly the easiest to avoid. Mispronouncing the Heisman winner's name on the most important day of his life isn't great, Rog. 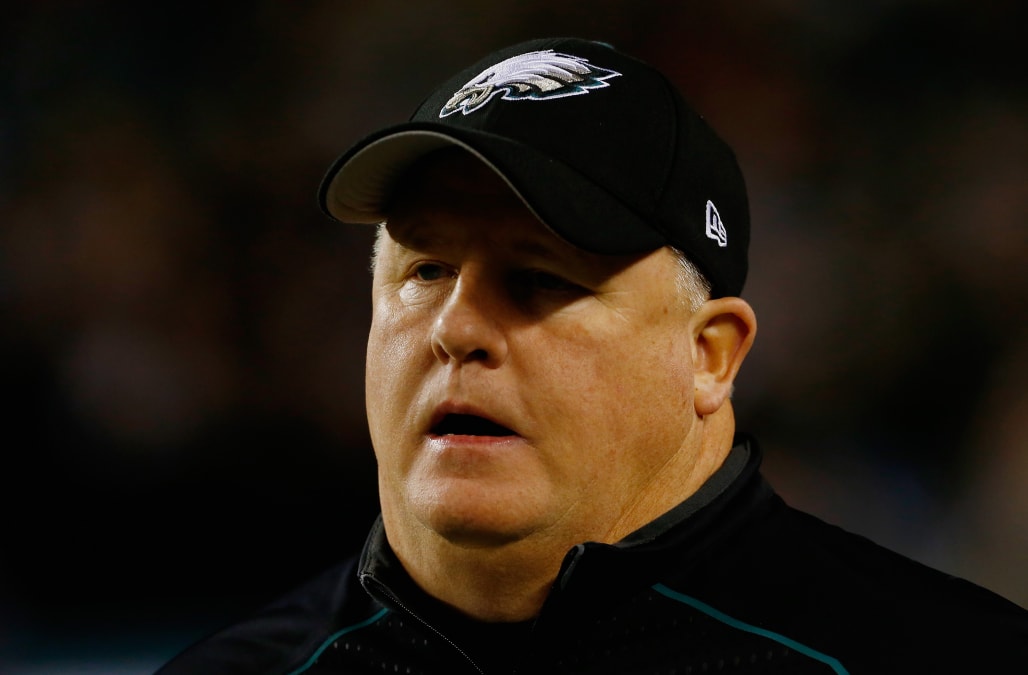 The team that was supposed to revolutionize the game itself is instead a laughing stock, and the man in charge may soon be out of a job. Tough luck for the 6-8 Eagles.

Based on how well he's played with his gigantic oven mitt/club on his mangled hand, the man has a point. 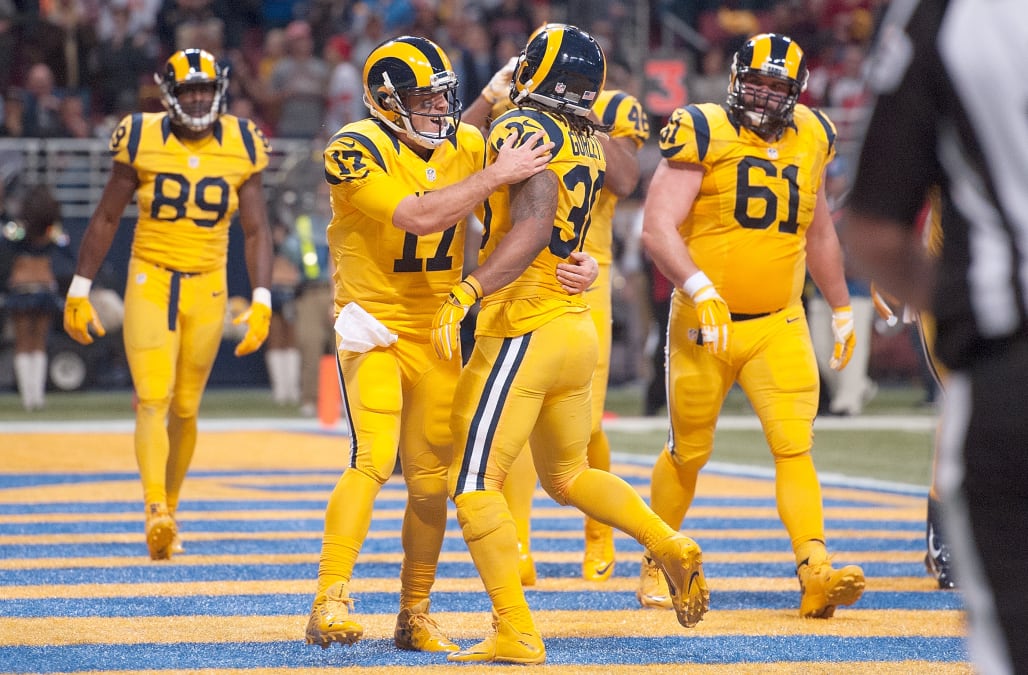 A twist on one of the best throwback uniforms in football.

Whenever you get replaces by Blaine Gabbert -- and he outproduces you at your position by a noticeable margin -- it's been a bad season. And for it, Colin Kaepernick's tenure as a San Francisco 49er is likely over.

TALK TO THEM CAM, IF THAT DONT WORK, DAB. pic.twitter.com/Mc0860Crhh

Sitting on top of the standings at 14-0, and celebrating every step of the way, Cam Newton is the NFL's king of 2015.
Tags
Read Full Story