There is growing confidence that the widespread warmth we've seen so far this December will also dominate much of Christmas week in the eastern half of the United States. Depending on how long the mild weather pattern holds on, next Friday could be the warmest Christmas Day of your lifetime, particularly if you live in one of the East Coast states.

This mild forecast means the prospect for a white Christmas is highly unlikely for many of those states.

Meteorologists sometimes jokingly refer to the type of warm weather pattern we have seen recently, and the one coming next week, as a "blowtorch" in social media. The term may be a reference to weather maps showing temperatures compared to normal; these patterns tend to resemble a large red or white scorch mark surrounded by shades of orange and yellow, as if a giant blowtorch had been pointed at the Earth.

Of course, the actual cause is not a blow torch but a weather pattern that keeps typical winter chill at bay and holds air from the Pacific or the tropics over the mainland United States.

The current warm weather pattern in the East will linger for a few more days until a cooldown arrives in time for the weekend. However, computer model forecast guidance is giving us a strong signal that widespread unseasonable warmth will return for much of Christmas week. This could add to the more than 1,900 daily record high temperatures that have been tied or broken across the Lower 48 in the first 14 days of the month. 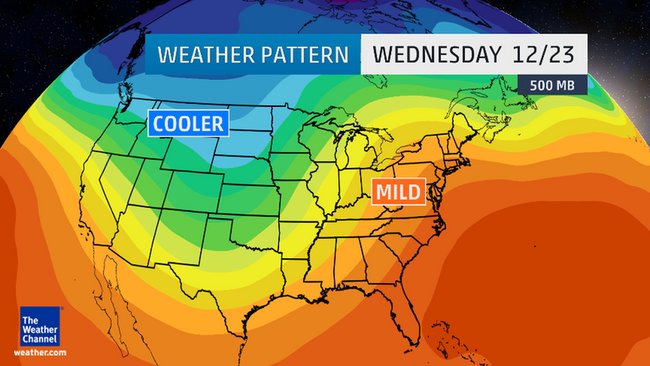 Below we have a look at the forecast, followed by perspective on how warm this December has been so far.

The ongoing mild weather that we've seen in recent days will continue into Thursday for parts of the East, though the number of daily record highs that will be threatened has decreased substantially.

On Wednesday, areas from the Great Lakes region to the Deep South will see highs 10 to 20 degrees above average for the last time this week. For the East Coast states, expect temperatures to stay much warmer than average through Thursday. Most areas will fall back to average by Friday except New England, where it will stay up to 10 degrees above average.

Temperatures will remain near average through the weekend in the eastern third of the nation, with even some snow possible in the interior Northeast and central Appalachians. However, the return of abnormal warmth will start to build in the nation's midsection. This leads us back into the "blowtorch" weather pattern that will return for Christmas week.

With the caveat that forecast details could change since we are several days away, here's an overview of the mild temperatures setting up for Christmas week.

The warmer than average temperatures will initially start to build back into parts of the Plains and Midwest Saturday into Sunday. Highs Sunday could be 10 to 20 degrees above average from Texas to parts of Minnesota, Wisconsin and Michigan.

This mild air will continue to build east, with most areas from the southern Plains to the East Coast 10 to 20 degrees above average by Tuesday.

Though the intensity of the above-average warmth may fluctuate each day, it appears most locations in the central and eastern states could see temperatures stay above average right through Christmas Eve or Christmas Day. 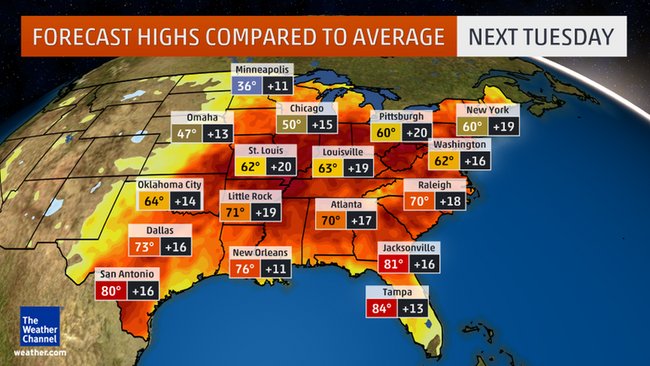 But this may not be a sunny, clear-sky type of mild weather pattern. A couple of low pressure systems and a southerly flow of moisture from the Gulf of Mexico will bring cloud cover and periods of rain next week, resulting in travel hassles at airports and on the roads.

Depending on how this mild weather pattern evolves, some cities could flirt with their warmest temperatures on record for Christmas Eve. 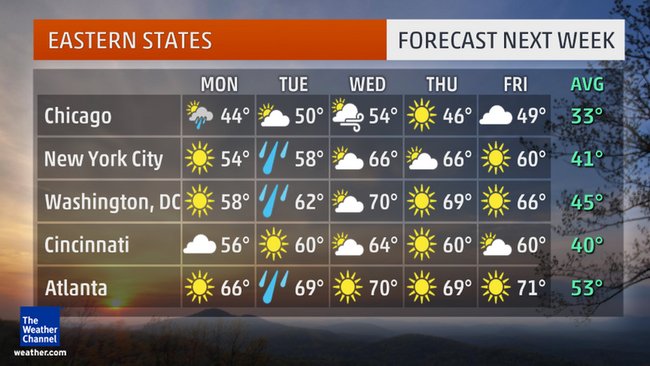 Here are a few of the daily record highs that are within reach on Christmas Eve (Dec. 24) for select cities based on the current forecast: 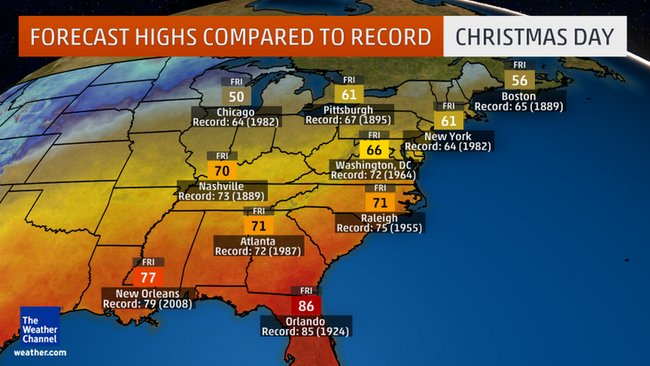 According to preliminary data from NOAA's National Centers for Environmental Information (NCEI), at least 1,974 record daily highs were tied or broken across the U.S. during the first 14 days of December, representing almost 5 percent of the roughly 40,000 daily high-temperature reports received from more than 3,000 locations. More than 2,800 additional record-warm low temperatures have been set during the same time period.

By comparison, just 93 daily record lows were set in the same time frame, most of which were on or before Dec. 5. 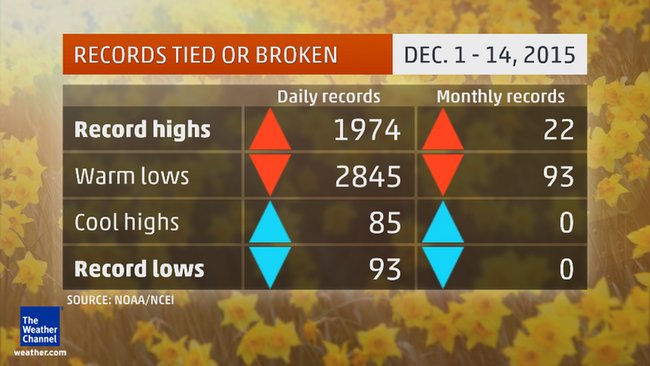 Incredibly, record high temperatures were set during the morning hours in several Midwest and Northeast cities during the four-day period spanning Dec. 12-15.

The overall average temperatures (highs and lows averaged together) during the first 14 days of December were 8 to 14 degrees above average for a large swath of the country, stretching from the Midwest into parts of New England and the mid-South, according to an analysis by NOAA's Climate Prediction Center. This is incredible considering the upper limit of the legend used on the graphic is eight degrees.

Why Will it Be So Warm Christmas Week?

Meanwhile, the clockwise flow around high pressure in the western Atlantic will allow southerly surface winds to dominate the East next week, pumping warm air from the tropics northward. Southerly winds ahead of a couple of low pressure systems moving across the country next week will also help pump in the mild, moist air from the south.